Brazil’s president has sacked the country’s army chief over concerns the country’s democracy is under threat following an uprising of far-right protestors.

The official website of the Brazilian armed forces said General Julio Cesar de Arruda had been removed as head of the army.

He has been replaced by General Tomas Miguel Ribeiro Paiva, who was head of the Southeast Military Command.

Around 1,500 people have been detained after the invasion of Brazil’s Congress, presidential palace and Supreme Court at the start of January.

Rioters were seeking military intervention to either restore the far-right former president Jair Bolsonaro or oust the newly inaugurated leftist Luiz Inacio Lula da Silva, known as Lula, who won the election with just 50.9% of the votes.

Supporters of the former president stormed through government buildings and destroyed public property.

Mr Lula said several times in public that there were definitely people in the army who allowed the rioting to occur. 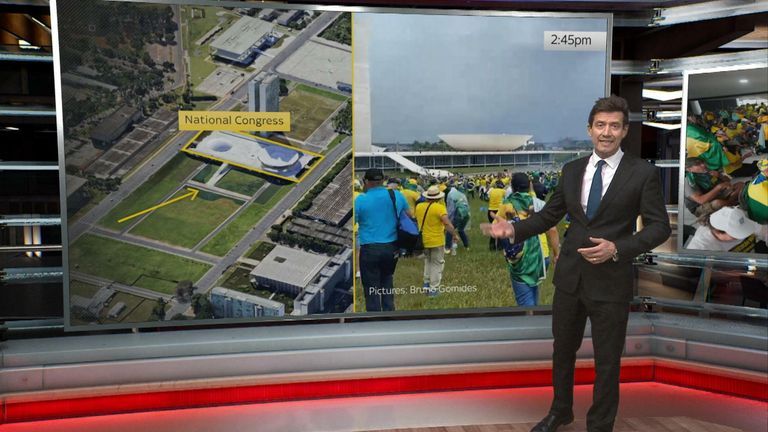 The riot bore strong similarities to the 6 January 2021 riots at the US Congress by mobs who wanted to overturn former president Donald Trump’s election loss to Joe Biden.

Speaking afterwards, Mr Mucio said the 8 January riots had caused “a fracture in the level of trust” in the army’s top levels and the government decided a change was needed.

Read more on Brazil:
What is happening in the capital?
Riots not a random outpouring of anger
Mob straight out of Trump’s playbook – with a difference

Bolsonaro is now being investigated for allegedly encouraging his supporters.

Brazil‘s supreme court has now agreed to look at the ugly scenes, much as US politicians held an inquiry into Donald Trump’s role in those in Washington.

Agreeing to a request by federal prosecutors, Justice Alexandre de Moraes stated: “Public figures who continue to cowardly conspire against democracy trying to establish a state of exception will be held accountable.”

Prosecutors say Mr Bolsonaro, who is in the US for medical treatment, will be investigated for possible “instigation and intellectual authorship of the anti-democratic acts that resulted in vandalism and violence”.

Saudi Aramco backs Brooklyn-based startup turning ammonia into fuel
Djokovic wins Australian Open a year after he was deported over COVID vaccine row
There’s a buzz about green hydrogen. But pink, produced using nuclear, may have a huge role to play too
Focused Lakers rally as LeBron closes on Kareem
Why we might have to wait until 2024 to see Artur Beterbiev vs. Dmitry Bivol in a must-see matchup