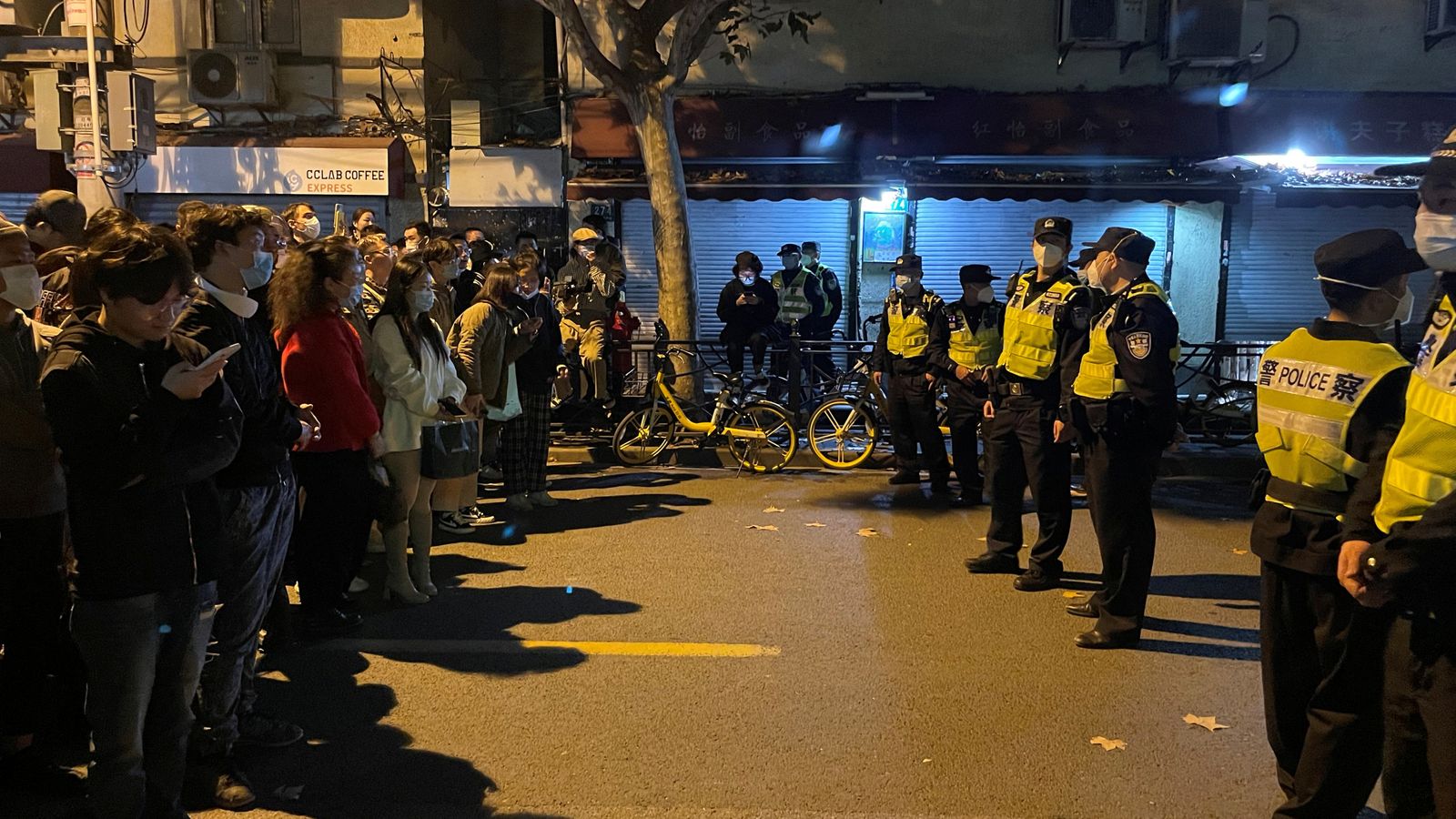 As night fell in Shanghai, they gathered in their hundreds.

Ordinary, angry people who took their frustrations on to the streets.

When we arrived, we followed the crowds right up to a barricaded road. It was blocked by a row of police standing shoulder to shoulder.

They were preventing people from congregating at Wulumuqi Road, the site of yesterday’s protest.

But regardless of where they were allowed to gather, people came anyway.

Initially they stood largely in silence; words can be dangerous here.

But there was a power in them being withheld, and instead they held up blank pieces of paper and waved white handkerchiefs.

Their presence alone spoke volumes; everyone was taking a huge risk.

But there was a sense they felt they were part of something historic and important. Some faces were emotional, others were angry.

Amongst the crowd, we met a group of young friends brimming with passion.

“We hope that more people will stand up bravely and firmly, that is our goal,” one of them told us.

“Because we told the truth, they were not happy and they arrested some people. We demand that they free these people, but they do nothing, they do not treat people as people.”

People spontaneously applauded her for speaking, as they did with everyone brave enough to talk to the media.

Chants of “free the people” started up immediately around her and spread throughout the crowds.

Another woman started telling us how her overriding feeling was sadness rather than anger when suddenly she was cut short.

The police charged into the crowd, moving quickly, decisively, pushing people back, arresting those in their way.

Everyone who could, ran.

Gradually, they pushed people further and further: we saw at least one person wrestled to the ground and arrested, but the crowd did not disperse.

A heavy-handed response may well follow – the authorities have much to concern them.

Protests like this have now erupted across multiple cities – shouts of “no PCR tests” occasionally accompanied by bolder calls including “down with the Chinese Communist Party”.

Chants like this are genuinely unheard of, and while such scenes may be expected elsewhere, they are not in China.

It is hard to overstate how extraordinary this is.

The CCP will be watching, but so too will the world.

No 10 admits ‘very difficult’ day ahead as hundreds of thousands of workers go on strike
24 star Annie Wersching dies at the age of 45
Saudi Aramco backs Brooklyn-based startup turning ammonia into fuel
‘Her children need her home’: Family of missing dog walker ‘stuck in a nightmare’ since she disappeared
Chinese spy balloon ‘detrimental’ to planned US visit, says Blinken