China’s COVID case load has soared to its highest since this year’s strict two-month Shanghai lockdown, with the capital Beijing and other major cities seeing record daily infections.

On Friday, the country reported 10,535 new locally transmitted cases were recorded on Thursday – the highest since 29 April when its commercial hub, Shanghai, was battling its most serious outbreak.

The growing number of infections has spurred China‘s leadership to reaffirm its zero-COVID policy, which President Xi Jinping says is to save lives.

The strategy has seen millions of residents confined to their homes, subject to mass testing programmes and enduring sudden lockdowns – in areas where positive coronavirus cases or their close contacts have been detected.

The country’s COVID-19 case load has remained small by global standards, and some believe the strict pandemic restrictions are holding back the economy and are increasingly out of sync with the rest of the world.

The southern city of Guangzhou, the current epicentre of China’s COVID fight, reported 2,824 new coronavirus cases – the fourth day in which infections exceeded 2,000.

The vast majority were in the populous district of Haizhu, where authorities announced a hard lockdown after days of widening restrictions and curbs.

It’s 1.8 million residents have been told to “stay at home”, with only one person in each household allowed to leave to buy necessities, and mandatory PCR tests will be administered to “every household and every individual”, the district government said in a statement.

It is where restrictions have had a major impact on businesses, including at a Chinese industrial park where a Foxconn plant responsible for 70% of global iPhone shipments has reportedly suffered a mass exodus of workers, sick of curbs on their movements.

It has impacted iPhone production, with Apple warning customers they will have to wait longer for the latest models. 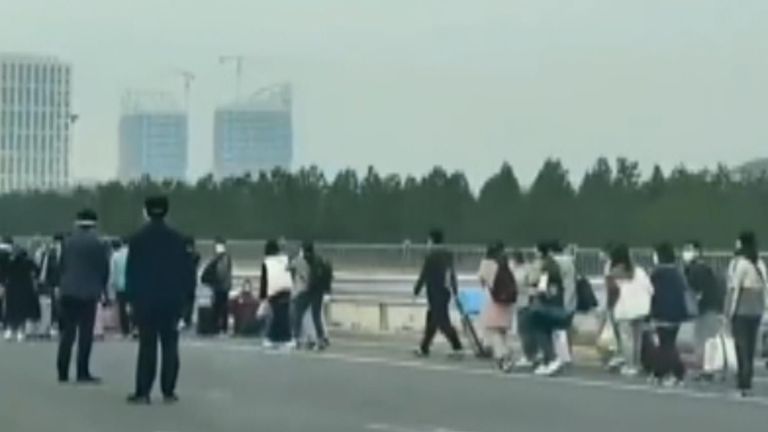 The southwestern city of Chongqing has seen infections rise to a new high of 783, with authorities in some districts banning dining in restaurants and suspending offline classes at schools.

Residents in the city of 22 million have been told to take PCR tests every day, while restrictions have started to be imposed on entering office blocks, leisure venues and fitness centres.

The Beijing Auto Show – a high-profile event that draws global brands – has been cancelled by organisers due to the nationwide COVID outbreaks.