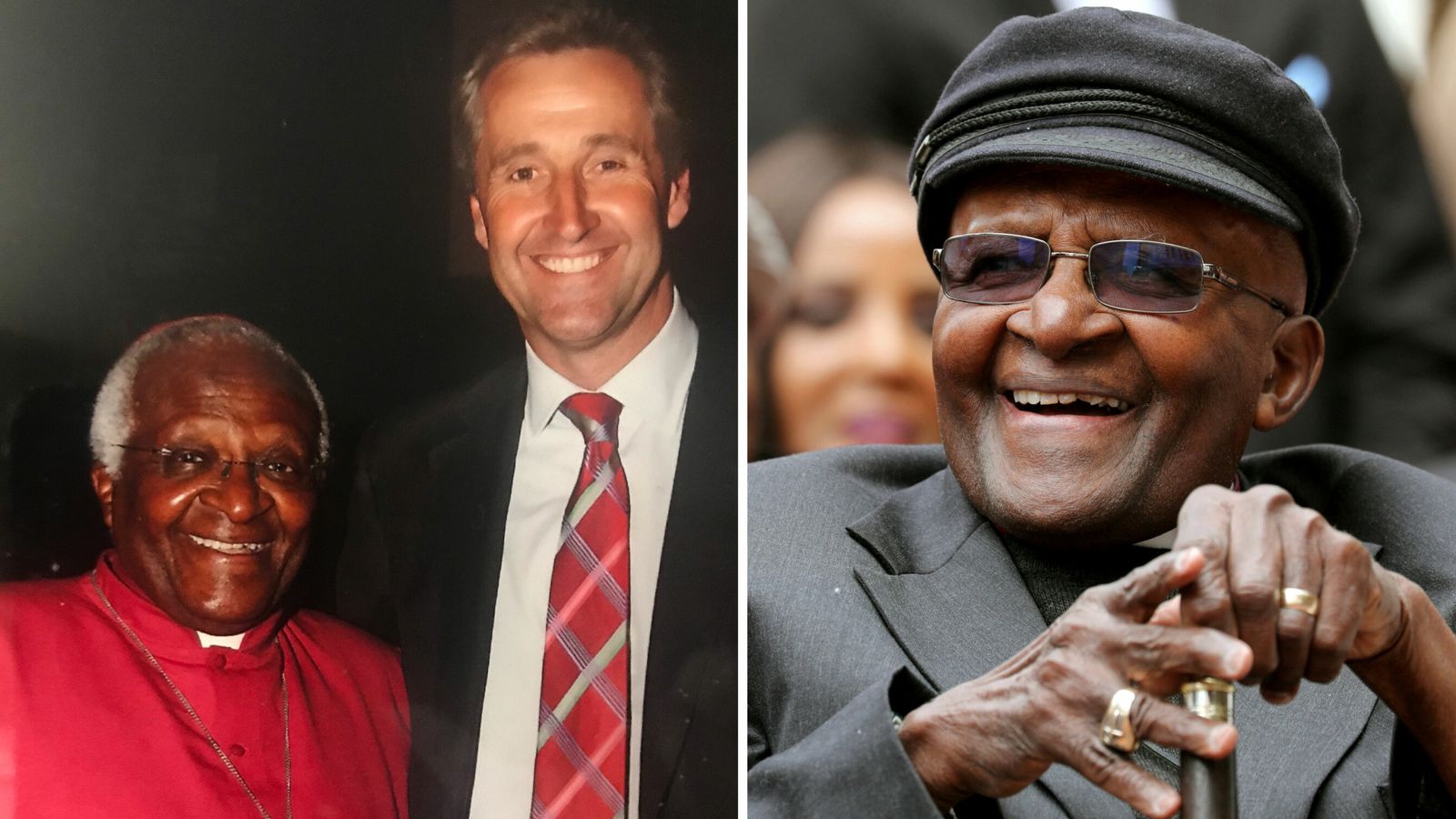 In the summer of 2008 I was asked to interview Archbishop Desmond Tutu at the Salisbury International Arts Festival. Although I had met him and interviewed him several times when I was based in South Africa, I was a little nervous beforehand and I think he could see it.

Five minutes before we began, in the room backstage, Mr Tutu took my hand. “Come on let’s pray”, he said. He told all of us, organisers, technical staff, and my wife and two of my daughters, who were also there, to hold hands in a circle. “Let us just take a moment to pray for the success of this event, that Mark asks the right questions and I give the right answers, and everything works out well!”

Happily, I think it did work out OK and Mr Tutu was as lively, compelling, fascinating and honest as he always was.

And, right there, you have Archbishop Desmond Tutu. First and foremost he was a man of God. And second he was a figure for whom honesty and the truth were more important than almost anything else.

It was 15 years earlier that I had first met Mr Tutu, amid difficult times in South Africa. The transition from apartheid to black majority rule was tantalisingly close. But it was also under threat, with extreme right-wingers bent on destroying the process, but, more problematically, political violence raging in the black townships.

After another night of slaughter I went to see Mr Tutu. He was in despair and believed the killings would give the apartheid rulers the excuse they needed to retreat from agreements. “The violence has to stop,” he said, “or the killing will kill the new South Africa before it has begun. I am scared for the whole process of peace”.

And when, in 1993, the black activist Chris Hani was murdered by a white racist, it was Mr Tutu who could again see the threat to the whole process. He pleaded for calm and for no revenge. “We are the rainbow people of God! We are marching to freedom! Black and white together.”

He shared the view of his great friend, Nelson Mandela, that reconciliation was the only way forward for South Africa. To that effect, after becoming the first black president of South Africa, Mr Mandela asked Mr Tutu to chair the Truth and Reconciliation Commission, a job Mr Tutu told me was the hardest of his life. He was castigated by white conservatives who saw it as a witch hunt, and also by many black South Africans who viewed it as a way for the criminals of apartheid, the enforcers of white minority rule, to literally get away with murder.

But Mr Tutu was convinced it was the only way forward. I remember he would often weep as the horrors of apartheid were recalled by torture victims and bereaved families. He cajoled former police officers to tell the truth about their crimes as agents of oppression.

It wasn’t perfect and after a few months there were suggestions it would cause more harm than good. But Mr Tutu was insistent. “Only the truth, the acknowledgement of what happened, the anger and the hurt, can bring forgiveness and healing”, he told me.

“If you can find it in yourself to forgive, then you are no longer chained to the perpetrator”, he once said. The commission was judged a partial success, which was good enough for Mr Tutu who, by the time it was ending, had developed prostate cancer.

I moved away from South Africa and I did not see Mr Tutu again until our meeting in Salisbury. By then he appeared disillusioned. He was critical of the corruption of the black political elite; he was critical of the ANC leadership who were failing to deal adequately with the poverty and hardship across the country.

He also didn’t much like what was going on in the rest of the world. The chaos and death in Iraq, in particular. He blamed George Bush and Tony Blair for all that.

The last time I saw him was in Soweto in 2010. South Africa was about to stage the football World Cup and he was draped in the green and gold of the national team. “How are you?” he said, greeting me with a fist bump. “Because we are very happy, very happy.”

For the next couple of weeks he danced and sang along with the rest of the country as they celebrated the sporting spectacle unfolding in their country. It was a great time for the new South Africa. “A shot in the arm”, he said.

But I could tell all was not well. His friend Mr Mandela was quite seriously unwell, he himself was still under treatment for cancer and increasingly frail.

He conceded then that both he and Mr Mandela were saddened by how 16 years of black majority rule had not tackled crime and poverty or adequately addressed the ills of apartheid.

Mr Tutu had come up with the phrase “Rainbow Nation”. It was his dream. In a country where it was often not easy, he was always emphatically an optimist, a voice of hope. He may have left us, but that hope lives on. It is quite some legacy.

Sixth Memphis police officer sacked over Tyre Nichols’ killing
5,600 buildings destroyed by quake in Turkey – as civil war complicates rescue efforts in Syria
Joe Biden vows to work with political rivals in his latest State of the Union address
Marsch sacked by Leeds after poor run of form
Avis has new T&Cs for renting its EVs, and they’re a little weird