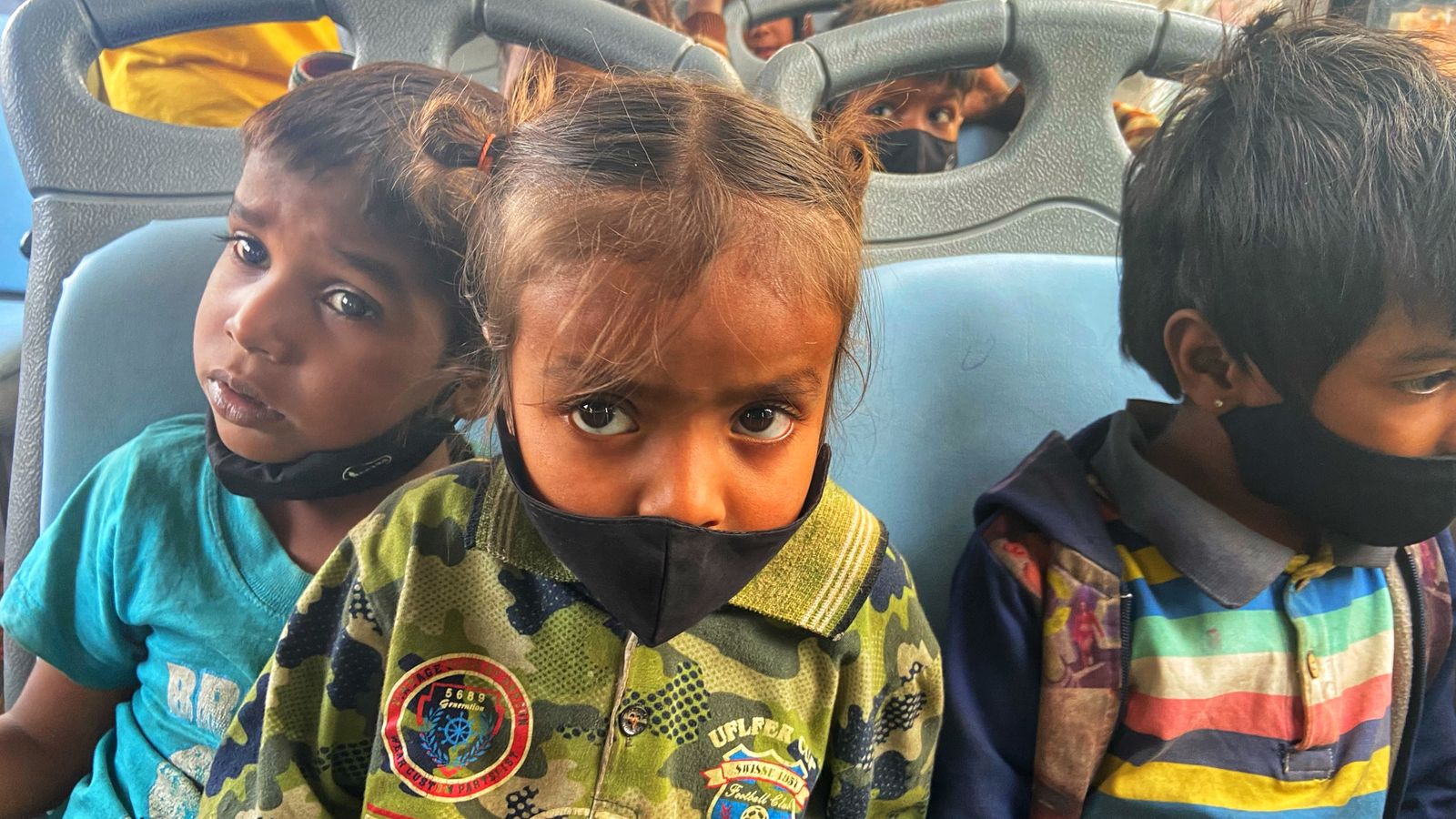 On a cold winter morning dozens of children line up outside their shacks for a warm up lesson. Patiently awaiting their school to turn up.

There is sheer excitement and delight amongst them as they see their school pull up. The Hope Bus is their class room for a few hours every morning. It’s probably the only opportunity the children of some of the poorest of the poor have to get any learning.

They all rush into the bus to take their seats.

Teachers and volunteers of Tejas Asia, a non profit group, have been working with the underprivileged for years.

Marlo Philip, Founder, of Tejas Asia told Sky News: “Our aim is to take the mobile school bus to where they are because they don’t seem to be going to any of the other schools which are around their community due to many reasons.

“We have seen thousands and thousands of children come to the programme, get on the bus, get free education and a good free hot meal everyday which is so important for their life.”

Scores of families live in the shadows of the 14th century Tuglaqabad fort on the outskirts of Delhi. Their temporary shacks made from wooden boards and tarpaulin under a canopy of Kikar trees are barely any protection from the elements.

Hundreds of children from this community of rag pickers and rubbish collectors would find it very difficult to get any formal learning. The government school is a few kilometres away and most parents would not be able to walk them there. The squalid slum has no clean drinking water, medical facility and electricity is scarce.

A television starts playing out educational videos which helps settle the kids into their seats. The basics of maths, English, Hindi and some writing skills are taught.

But in all this fun and chatter, there is the serious fundamental introduction of a formal education – which otherwise would be lacking.

The pandemic has made matters worse as schools remained shut and restricted. As schools switched to online classes, for these children living on the periphery learning became a dream

“Its been a real difficult season for the families for the children, its very depressing to see that,” said Marlo.

“But I believe that our presence has definitely helped them, specially the children to really fight this battle in a much better way. We see the hope rising in many of the communities.”

Every day, four buses fan out to the most marginalised communities living on the edge.

Eleven year old Preeti shares a one room shack with five siblings and parents. She wants to be a teacher and doesn’t miss a day of class.

Her mother, Pooja Bai, said: “It’s very good that the bus comes here then all the children can study. We have to go out to work and are unable to take the children to the far-off school. And then they spend their time playing and not studying.”

After classes the children line up for a hot meal of rice and chickpea curry. They bring their own utensils and carry the food home. The lunch is an added attraction and for many it this may be the only nutritious meal they would have that day.

The children here could easily fall through the cracks of gaining any formal education.

For this brief period in their otherwise hard day the children find their escape. The classroom takes them away from the struggle and wretchedness of their lives.

Warning of ‘significant job losses’ at Asda as it faces potential strikes over ‘efficiency’ plans
Little protest among Tories over Zahawi sacking – but Sunak now has even more ground to make up
$6.6 billion fintech Wise accused by rival of harming competition
Molly-Mae Hague reveals baby daughter’s unique name
UK economy to fare worse than any country in developed world, including Russia, this year – IMF