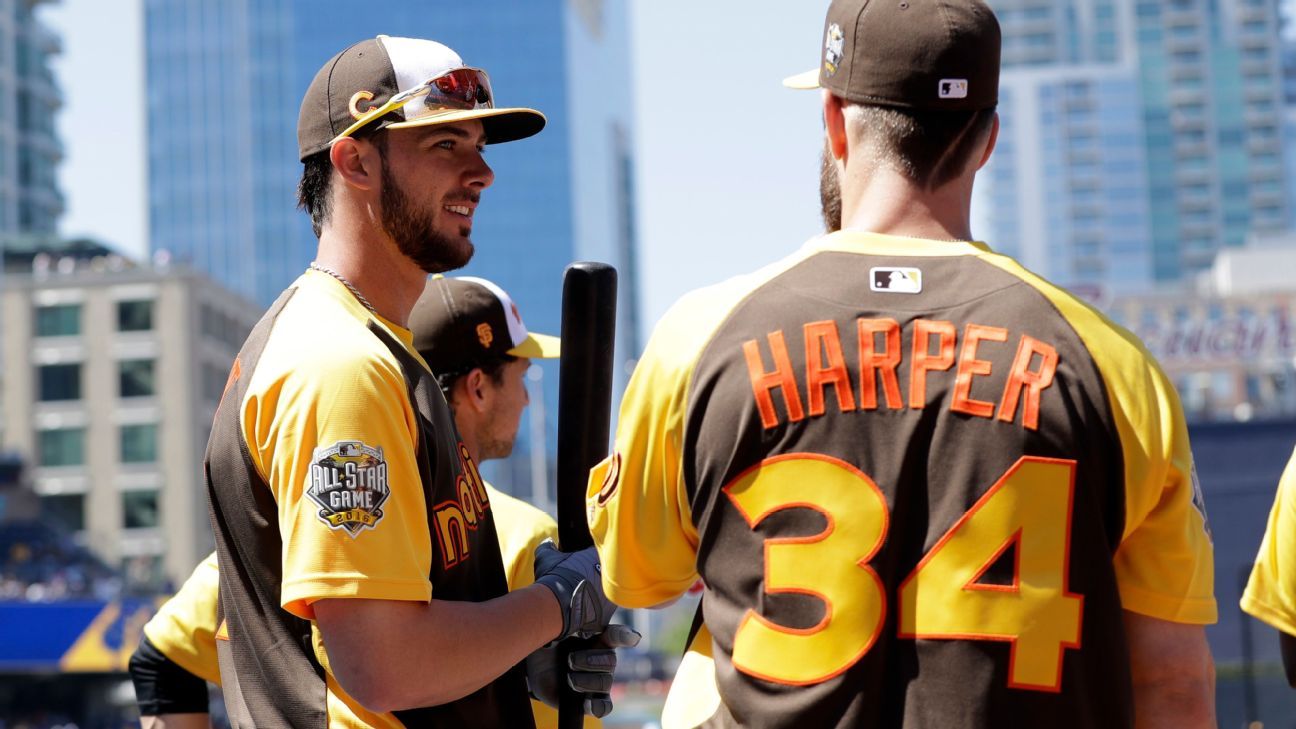 It’s probably best to forget about Kris Bryant‘s extraordinary first three years in the big leagues, when he captured a Rookie of the Year Award in 2015, was named the National League’s Most Valuable Player in 2016 and boasted a .946 OPS in 2017. We might never see that guy again, and that’s OK. The current version of Kris Bryant — a man who hits for power, takes his walks and can cover up to five positions — is pretty good, too.

Eliminate the COVID-19-shortened 2020 season, when star players throughout the league struggled to adapt to a completely different environment, and Bryant has finished every season with an OPS of at least .834. In all but one of them, he played in more than 140 games. From 2018 to 2021, Bryant accumulated 11.1 FanGraphs wins above replacement. Thirty-nine position players did better, but only two — Freddie Freeman and Trevor Story — are free agents.

Bryant isn’t perfect, but he can make any team significantly better. His defense isn’t great at any one position, but his skill set is enough to at least make him passable at all of them. He’s about to venture into his 30s, but the relatively short length on his next contract — ESPN’s Kiley McDaniel predicted five years at a total of $90 million — could mitigate some of the back-end concern.

Bryant bounced back nicely in 2021. He batted .265/.353/.481, made his fourth All-Star team, was worth 3.6 FanGraphs WAR and started at least 10 games at five different positions (first base, third base, left field, center field and right field, plus he even made one late-game appearance at shortstop). When Major League Baseball’s offseason resumes, Bryant, who turns 30 next month, will become one of the sport’s most coveted players available. And his versatility opens a plethora of options. Below is a look at five teams that seemingly make the most sense.

This, admittedly, is something of a pipe dream. The Brewers haven’t necessarily been linked to Bryant, largely because they probably can’t afford him. Their Opening Day payroll has been above $105 million only once, in 2019, when it soared past $122 million, only to take nearly a 20% cut the next time a full season was played in 2021. For 2022, they’re already projected for slightly more than $110 million.

But signing Bryant might make them the best team in the National League.

Bryant can slide in comfortably at first base, moving Rowdy Tellez — with a park-adjusted OPS only 5% higher than the league average in 275 career games — either to designated hitter or to a part-time role, depending on what the rules look like moving forward. He allows third baseman Luis Urias to bounce around if needed, and takes some of the burden off 35-year-old center fielder Lorenzo Cain — but the big picture is what’s important here.

The Brewers have the best rotation in the sport, a devastating back end of the bullpen and a nice lineup that could use a little bit more punch. Bryant can form a dynamic pairing with Christian Yelich. But it would require a mid-market team paying two players more than $50 million a year on a long-term basis, with Corbin Burnes and Brandon Woodruff continually becoming more expensive. The largest free-agent contract handed out by the Brewers went to Cain — a five-year, $80 million deal signed in January 2018. Before that, it was Matt Garza, who got $50 million in 2014. It’s worth dreaming on, at least.

It’s time for the Red Sox to start acting like the Red Sox again. They’ve been uncommonly frugal since trading Mookie Betts two offseasons ago, most recently spending a combined $22 million on three back-end starting pitchers (James Paxton, Michael Wacha and Rich Hill). But now the Red Sox could use a big bat, ideally a corner outfielder who would strengthen the rest of the lineup by limiting Enrique Hernandez to two positions: second base (where Christian Arroyo can spot him when needed) and center field (where Hernandez can spell Jackie Bradley Jr. against left-handed pitching).

Bryant would fit in nicely in left field and can also get some time at first base, where the right-handed-hitting Bobby Dalbec is slated to start after accumulating 25 home runs in his first full season. The Red Sox need a move like this to keep pace with the New York Yankees, Toronto Blue Jays and Tampa Bay Rays in baseball’s deepest division. And, yes, they can afford it. Bryant’s contract would probably put the Red Sox close to the $200 million mark in 2022, but they can navigate in those spaces. After this season, their only major financial commitments will be to Chris Sale, Xander Bogaerts and Rafael Devers.

The first month of the offseason rolled by, and a bevy of top-shelf starting pitchers — Max Scherzer, Justin Verlander, Robbie Ray, Marcus Stroman, Noah Syndergaard, Kevin Gausman — came off the board without any of them landing in San Francisco. Instead, the Giants filled their numerous rotation holes in a relatively conservative fashion, adding Alex Cobb while also bringing back Alex Wood and Anthony DeSclafani. In the wake of the surprising retirement of Buster Posey, the Giants might stay in-house at catcher, hoping Joey Bart can ascend to becoming a major league regular with Curt Casali providing insurance as his backup. The Giants’ best path toward adding impact talent — in free agency, at least — might be a reunion with Bryant. There are worse outcomes.

We’ve got the latest on MLB’s first lockout since 1990 — plus where things stand on the (currently frozen) free-agency front. Full coverage »

• FAQ: Everything you need to know about MLB’s lockout »

Bryant was good but not great with the Giants down the stretch, batting .262/.344/.444 with seven home runs and six stolen bases in 51 regular-season games. It’s a small sample size, but in that time, he started at third base and all three outfield spots. The Giants love versatility and are especially adept at maximizing matchups throughout their lineup. Bryant’s presence takes that to another level, especially if a universal designated hitter is part of the new collective bargaining agreement. He can spell Evan Longoria and Brandon Belt in the corner infield — both will likely be free agents next offseason, by the way — and can be a critical part of an outfield mix that features Mike Yastrzemski, LaMonte Wade Jr., Darin Ruf and Steven Duggar.

More importantly, he’s a right-handed power bat for the middle of the lineup, and the Giants can certainly use one.

The Mariners’ three-year rebuild ended with a thrilling stretch run that saw them win 19 of their final 29 games and finish the season with 90 wins, falling two games shy of snapping a two-decade-long postseason drought despite possessing a minus-51 run differential. The Mariners might have played above their talent level in 2021, but they believe they are entering into a legitimate contention window and have long targeted this offseason as the time to strike. Evidence of that came in the form of a late-November trade for second baseman Adam Frazier, a free agent in waiting, and, more so, a $115 million splurge on American League Cy Young Award winner Robbie Ray. But the Mariners need more offense. And before MLB’s owners locked out the players, they were linked heavily to Bryant, which makes plenty of sense.

The Mariners have a glaring hole at third base after the departure of Kyle Seager. Bryant fits perfectly there, allowing the likes of Ty France and Abraham Toro to bounce around in quasi-bench roles. But if first baseman Evan White continues to struggle offensively, Bryant can fill in there, too. And if the Mariners want to take some of the pressure off their premier outfield prospects, Jarred Kelenic and Julio Rodriguez, the latter of whom seems poised for a 2022 debut, Bryant can work there, as well. The Mariners owned the fourth-lowest OPS in the majors last season, and currently Frazier and Mitch Haniger are their only proven major league hitters. They have previously been linked to Trevor Story, Matt Chapman and Seiya Suzuki, all of whom can be had once the offseason resumes, but Bryant makes as much sense as anybody.

Upon signing his 13-year, $330 million contract with the Phillies in February 2019, Bryce Harper made it clear he wanted to recruit star players to Philadelphia. Enter Bryant, Harper’s buddy from the Las Vegas travel-ball scene who also happens to share an agent. Here’s the deal: The Phillies’ farm system isn’t very good and their payroll is noticeably top-heavy. The organization could be in for another long rebuild in the near future. And so it needs to do everything it can to capitalize on the current core in hopes of winning now, a path made even more difficult by the fact that the reigning World Series champions (the Atlanta Braves) and baseball’s biggest spenders (the New York Mets) share the division.

Keep up with the latest moves, grades and analysis — all in one place — from the first half of baseball’s 2021-22 hot stove season. Tracker »

To the Phillies, Bryant seems to be more a necessity than a luxury at this point. Their regular third baseman, Alec Bohm, struggled through a .247/.305/.342 slash line in 417 plate appearances during his age-24 season in 2021. And though it would benefit the Phillies to exercise more patience with their former No. 3 overall pick, having Bryant as insurance at that position would be a major benefit. In the meantime, Bryant can get the vast majority of his playing time in left field, where the Phillies don’t have a clear-cut starter since the offseason departure of Andrew McCutchen. He can also help in center, another position of weakness.

Over the next two years, the Phillies will pay Harper, J.T. Realmuto, Jean Segura, Zack Wheeler and Aaron Nola more than $210 million combined. That’s a lot of money, but those are really good players. The Phillies need more help to win with them.

‘Her children need her home’: Family of missing dog walker ‘stuck in a nightmare’ since she disappeared
Electric truck maker Rivian confirms it is developing an electric bike
Uber beats estimates and the stock is up
Bill Gates on why he’ll carry on using private jets and campaigning on climate change
Microsoft’s $69bn takeover of Activision a step closer to being blocked by UK watchdog