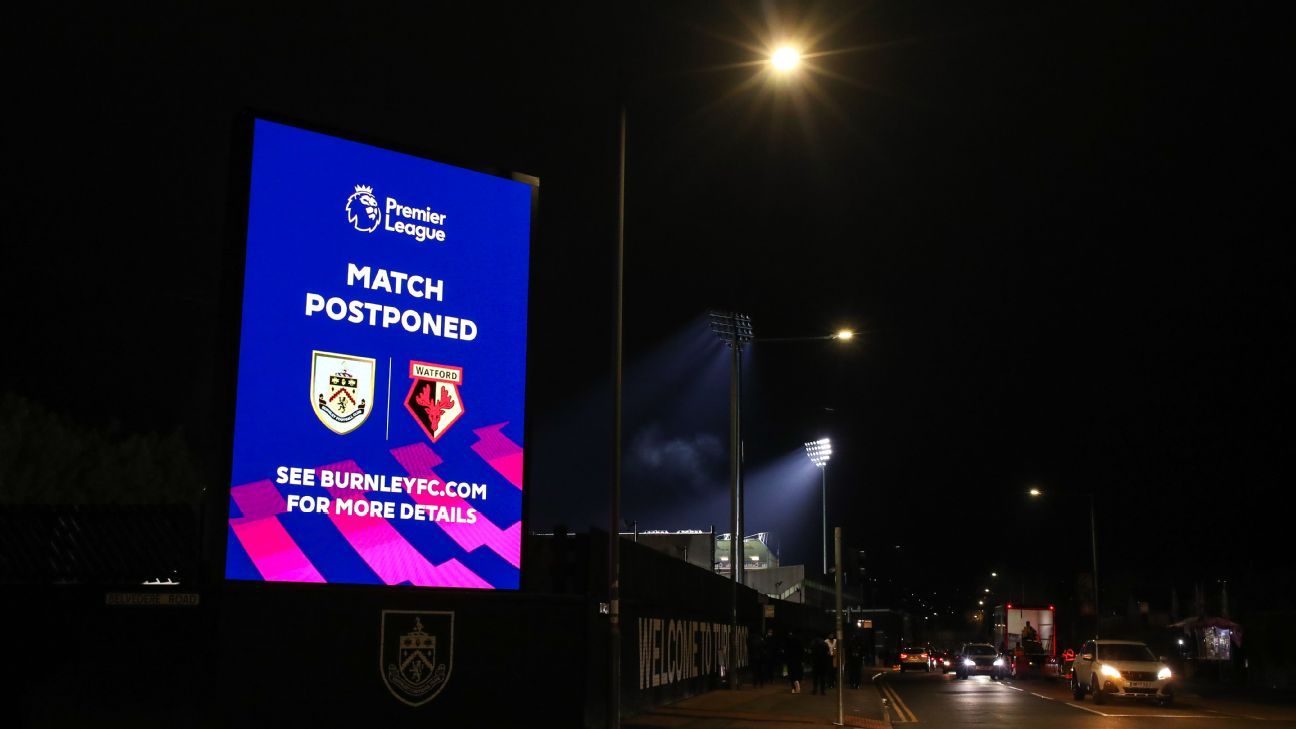 The Premier League is about to embark on its busiest period of the season, with 40 games — plus all four Carabao Cup quarterfinals — due to be played in the space of 17 days starting this Saturday. But a resurgence of COVID-19 is threatening to wreak havoc on the fixture list.

Manchester United’s home game with Brighton this weekend was the fifth Premier League fixture to be postponed in the space of six days because of a COVID-19 outbreak that had ripped through the squad of one of the competing teams, with Leicester vs. Tottenham (Thursday), Burnley vs. Watford (Wednesday), Brighton vs. Tottenham (Sunday) and Brentford vs. Manchester United (Tuesday) also being forced to be called off because of several positive test results.

Speaking at a news conference on Thursday, Brentford head coach Thomas Frank — who confirmed his club has recorded 13 positive cases in the latest round of testing — urged the Premier League to postpone this weekend’s round of fixtures, saying “COVID-19 cases are going through the roof at all Premier League clubs, everyone is dealing with it and having problems.” Sources told ESPN that a number of clubs are even pushing for a shutdown until the new year given the increasing number of cases.

Football’s coronavirus problems in the United Kingdom are a reflection of society, with the country recording 78,610 positive cases on Wednesday — the highest national figure since the start of the pandemic in March 2020. This week, the Premier League introduced emergency measures in an attempt to reduce the risk of outbreaks within clubs and ensure that fixtures can go ahead without disruption. But the game faces a turbulent period in the weeks ahead; how will the Premier League navigate a safe path through the latest COVID-19 outbreak?

What is the situation right now?

The Premier League reported 42 positive COVID-19 cases among players and staff at its 20 clubs between Dec 6-12 — the highest weekly total since comprehensive testing began in May 2020. Following the outbreaks at Tottenham, Manchester United, Watford and Brentford this week, the record number of positive tests is expected to hit a new high when the Premier League releases the numbers at the end of this round of testing.

The postponement of Tottenham’s Europa Conference League tie against Rennes on Dec. 9 due to 13 positive tests was swiftly followed by their league game against Brighton on Dec. 12 being called off. The domino effect is evident, with Brentford-United and Burnley-Watford also falling victim to COVID-19. However, Tottenham’s Premier League trip to Leicester on Thursday was postponed hours before kickoff after Leicester reported nine positive cases on Wednesday, with Tottenham still dealing with the after-effects of their own outbreak, which returned 15 positives among players and staff.

Premier League rules stipulate that games must be played if at least 14 players are fit and available, although that rule is open to interpretation depending on the age and experience of those players deemed fit to play.

Will there be a temporary shutdown of games?

This is a fast-moving situation, with UK Prime Minister Boris Johnson warning that the country faces a “tidal wave” of infections because of the Omicron variant, and sources have told ESPN that the Premier League will ultimately be guided by government advice and instruction. But as of today, the Premier League is not planning to halt the fixture list, opting instead to judge each game on a case-by-case basis.

The view within the Premier League is that there remains enough space in the calendar for games to be re-scheduled, and it is their desire for postponed games to be played as quickly as the fixture list allows. Although sources at the Premier League have said that May 22 is a “hard stop” in terms of the league season, the absence of a major tournament next summer because of the World Cup in Qatar being moved to the winter (Nov. 21 to Dec. 18) does give scope for an extension to the season if absolutely necessary.

Clubs have asked the league for a full shutdown and while that request is considered, it’s clear that some clubs are already facing fixture problems. Spurs must reschedule the Brighton and Leicester games as well as their clash with Burnley, which was called off last month because of snow. They’re also still attempting to find a date to play Rennes in the UEFA Europa Conference League, a situation that has become more challenging with France announcing it will close its border with the UK on Saturday because of COVID.

What’s being done by the Premier League and its clubs to prevent outbreaks?

The Premier League announced on Dec. 13 that it was implementing its Emergency Measures in an effort to reduce transmission within clubs. This means that players and staff must undergo daily testing in the form of a Lateral Flow Device (LFD) and two PCR (Polymerase Chain Reaction) tests a week. Any positive results on an LFD must be followed up by a PCR.

Additionally, one PCR test must be taken on the day of the game, which sources have said will be an increasing factor in terms of games being called off late, such as Burnley vs. Watford.

Dan Thomas is joined by Craig Burley, Shaka Hislop and others to bring you the latest highlights and debate the biggest storylines. Stream on ESPN+ (U.S. only).

With society not being told to observe a lockdown by the government, the Premier League are not insisting that clubs impose secure bubbles for players and staff, but clubs have been urged to promote the benefits of booster jabs to all staff as the best defence against COVID.

Are players being urged to receive the COVID-19 vaccine?

The vaccination status of players is not fully known, and no figures have been released since the Premier League revealed in October that 68 percent of players were fully vaccinated and 81 percent had had their first dose. Sources have told ESPN that a concerted push within the game since October to urge vaccination resulted in an uptick in players being jabbed, but some players continue to play and train without being vaccinated.

Leading managers such as Manchester City’s Pep Guardiola and Liverpool’s Jurgen Klopp have urged players to be vaccinated, but the Premier League is not imposing a vaccine mandate, opting instead to point to government advice and messaging.

What is the procedure for games to be postponed, and why are they being called off so close to kick-off?

Norwich manager Dean Smith claimed earlier this week that clubs needed “guidance” as to the rules and regulations surrounding COVID-related postponements, but sources at the Premier League have told ESPN that all clubs voted on the protocols, which are in Article 17 of the PL Handbook, so there should be no confusion. Yet it is a vague procedure. Theoretically, games must be played if clubs have 14 fit players, but if some of those are untried teenagers from the club’s Academy, it becomes a grey area.

A club must contact the Premier League and various factors are taken into account, including the standard of the available players, whether the training ground has been closed and if the outbreak is controllable or not. The safety of players and staff — from both teams — is the primary factor in deciding on a postponement. The views of broadcasters is not a consideration, as highlighted by the postponement of games due to be televised this week.

However, there has been criticism of the timing of the call-offs at Brentford and Burnley this week. The postponement of Brentford’s home game against United on Tuesday was announced close to midnight on Monday, while Burnley’s clash against Watford was called off at less than three hours before the game was scheduled to kick-off.

Sources have told ESPN that games are called off as soon as positive test results are confirmed and that, as the public has discovered during the pandemic, those results can be delivered at any time of the day.

What about fans? Are we heading for games behind closed doors again in England?

In terms of games being played behind closed doors, that will be an issue for the government and there are no plans for stadiums to be closed at this stage. As such, the Premier League is adhering to the government’s Plan B of restrictions, which means that all venues with capacities of more than 10,000 people — which includes every Premier League stadium — must adopt a system of checking spectators for COVID vaccination status or proof of a negative LFD test within 48 hours of entry.

Sources have said that it is impractical for clubs to check the status of every supporter, so the Premier League is tasking clubs to do spot-checks of at least 20 percent of spectators. This is because of bottlenecks caused by large amounts of fans entering grounds 10-15 minutes before kick-off and the inability of stewards to check each of them without delaying the kick-off or causing congestion at the turnstiles.

Face coverings are not required to be worn by fans in the stadium.

So what happens now? Will the Premier League ride this storm without disruption?

That’s the question that nobody can answer right now. The medical and scientific advisors working for the UK government have warned of as many as 200,000 COVID infections a day in the week leading up to Christmas, with Dr. Jenny Harries, the CEO of the UK Health Security Agency saying on Wednesday that the numbers in the coming days will be “staggering.” That is the landscape within which football is operating right now, so it would be naïve to expect the Premier League to be immune to the problems facing society.

There are likely to be more postponements and in the days ahead — the question is whether it is a manageable number or if it becomes a problem that requires more stringent measures.