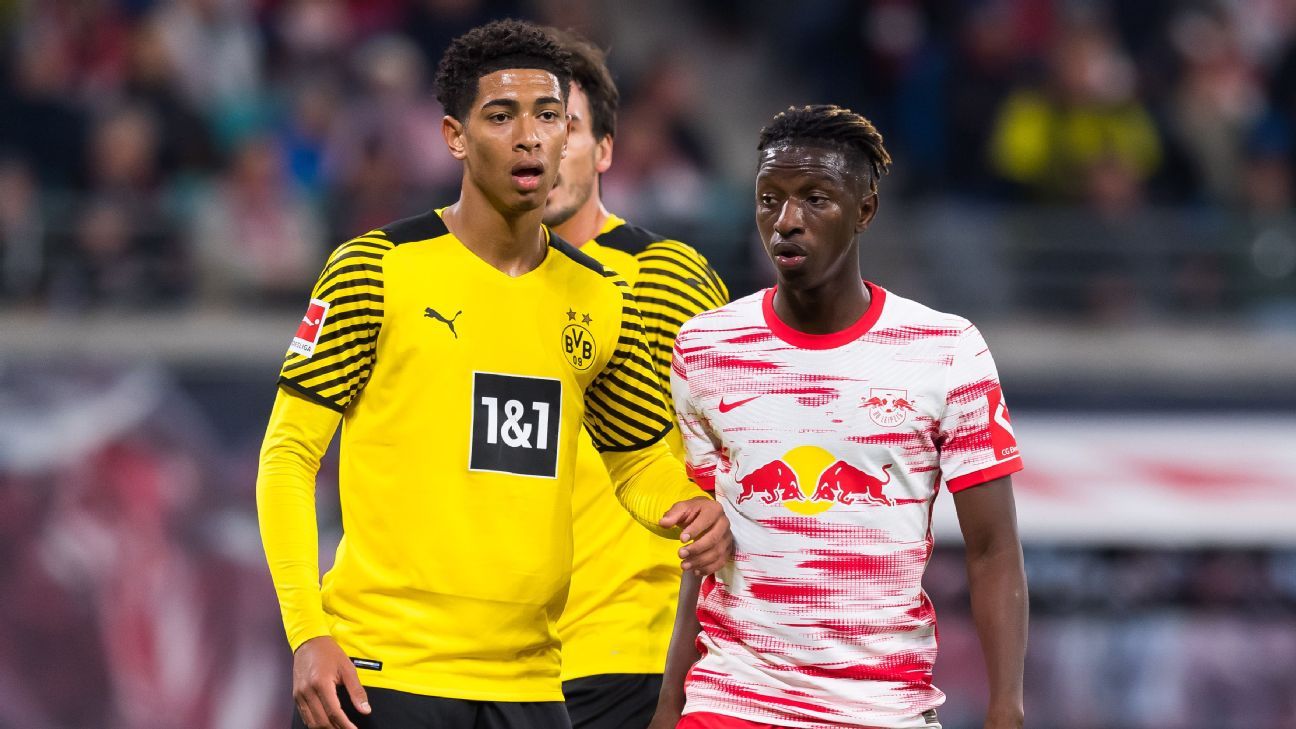 Ralf Rangnick has identified Manchester United’s midfield as an area of weakness — ESPN’s Insider Notebook has the latest.

Ralf Rangnick identified Manchester United‘s midfield as an area of weakness in his interview with club bosses and suggested players of interest before being offered the job as interim manager, sources told ESPN.

Sources told ESPN that he explained why the club should look to invest in midfield and suggested scouts take a closer look at RB Leipzig‘s Amadou Haidara, also identifying Borussia Dortmund‘s Jude Bellingham and Leeds United‘s Kalvin Phillips as potential midfield targets. Meanwhile, Bellingham’s Dortmund teammate Erling Haaland, a long term United target, was also mentioned by Rangnick ahead of what is likely to be a Europe-wide battle for the player’s signature in the summer.

Fred and Scott McTominay were handed starts in Rangnick’s first game as interim boss — a 1-0 win over Crystal Palace last Sunday in which Fred scored the winner — and while the new boss was pleased with the pair, he did earmark room for improvement.

“They did one or two or three mistakes, especially in the first half there were two square passes; one from Scott, one from Fred,” Rangnick said. “I don’t like those kinds of balls in midfield in those positions. But overall, when the other team is in possession of the ball, both Fred and Scotty they are almost perfect for that kind of football.”

As well as improvements to the first team, Rangnick expressed his willingness to work closely with the club’s academy — a key point for Murtough and Woodward, who are keen to see youngsters given chances in senior football. Teenagers Charlie Savage and Zidane Iqbal, both 18, were handed debuts against Young Boys in the Champions League on Wednesday as United finished their group stage campaign with a 1-1 draw.

Sources told ESPN that, although Rangnick has been backed to explore the possibility of new signings arriving in the January transfer window, both he and the club expect a quiet month. Rangnick believes the squad he inherited from Solskjaer is too big and because of that, outgoings are more likely than notable arrivals. — Rob Dawson

Chelsea players and staff fear Cesar Azpilicueta will leave the club on a free transfer, with Barcelona leading the race for his signature, sources told ESPN.

The 32-year-old’s deal expires at the end of the season and, while the club were relaxed about the prospect of his deal running down given his longstanding loyalty to the club, talks have not progressed.

Sources claim one key issue outstanding is the length of contract Azpilicueta is seeking. He is free to negotiate directly with other clubs from next month; Barcelona have been tracking him, while Atletico Madrid are said to view him as a replacement for Kieran Trippier, who has been linked with a move back to the Premier League.

No decision has been taken and conversations over an extension were described by one source indirectly involved as “active,” but other sources claim there are Chelsea members of staff who fear Azpilicueta views next summer — the 10th anniversary of his arrival from Marseille — as a good time to depart.

He has been replaced in the first-team by Reece James and, while he is not pushing to leave, the prospect of a new challenge is thought to be attractive to Azpilicueta. — James Olley

As part of the club’s efforts to strengthen the left-back position, sources told ESPN that Manchester City have watched Arsenal defender Nuno Tavares, who has impressed in his first season at the Emirates Stadium.

The Portugal under-21 international has emerged as a contender for Kieran Tierney‘s place since his £8 million move to Arsenal from Benfica last summer, and while sources added City are unlikely to make a move in January, the 21-year-old remains a player of interest.

City have one recognised senior left-back at the club in Oleksandr Zinchenko, although former Juventus defender Joao Cancelo has performed that role with distinction in recent months. France international Benjamin Mendy has been suspended by the club.

Meanwhile, Pep Guardiola has been assured by director of football Txiki Begiristain that his squad, which is set to challenge in the Premier League, Champions League and FA Cup, will not be weakened in the January window, sources said.

Raheem Sterling and Ferran Torres have attracted attention from Barcelona while Nathan Ake has been linked with a move to Newcastle United where his former Bournemouth boss, Eddie Howe, is manager. — Mark Ogden and Rob Dawson

Brands, who joined Everton from PSV Eindhoven in June 2018, was close to negotiating a deal to take the former Ajax midfielder on loan at the start of this season, but United senior figures were reluctant to sanction the departure of a player who had cost an initial £35m when signing from Ajax in August 2020.

Van de Beek was overlooked by former manager Ole Gunnar Solskjaer and remained a key Brands target, despite the reservations of Everton manager Rafael Benitez. With Brands gone, sources said Everton will focus attention elsewhere when it comes to strengthening the squad in January.

Meanwhile, Van de Beek started his first game under Rangnick in the Champions League draw at home to Young Boys on Wednesday. The Netherlands international will be given the opportunity to impress, but no decision has been made on his long-term future. — Mark Ogden

Alejandro Moreno sounds off on Barcelona getting eliminated from the UCL group stage for the first time since the 2000 season.

Sources claim the relationship between players and manager is strained and Ajax are exploring the possibility of a loan move in January, or even a permanent transfer for the 24-year-old.

Conte highlighted Bergwijn’s versatility last week, claiming the winger could provide cover for Harry Kane in the centre-forward position, but added that “he is a player that I have to make an important evaluation [of].”

Sources claim Conte is unconvinced Bergwijn will be part of his plans and, with Tottenham eyeing up a busy January, the former PSV Eindhoven player could be made available. — James Olley

Why is Rick Astley suing rapper Yung Gravy?
Stormzy announced as latest performer for Brit Awards 2023
Six British children discovered in abandoned wine cellar in Austria
Chancellor to dismiss ‘gloom’ about economy – but set to resist calls for tax cuts
Girl, 15, dies and boy, 16, in hospital after stabbing – as teen arrested for murder