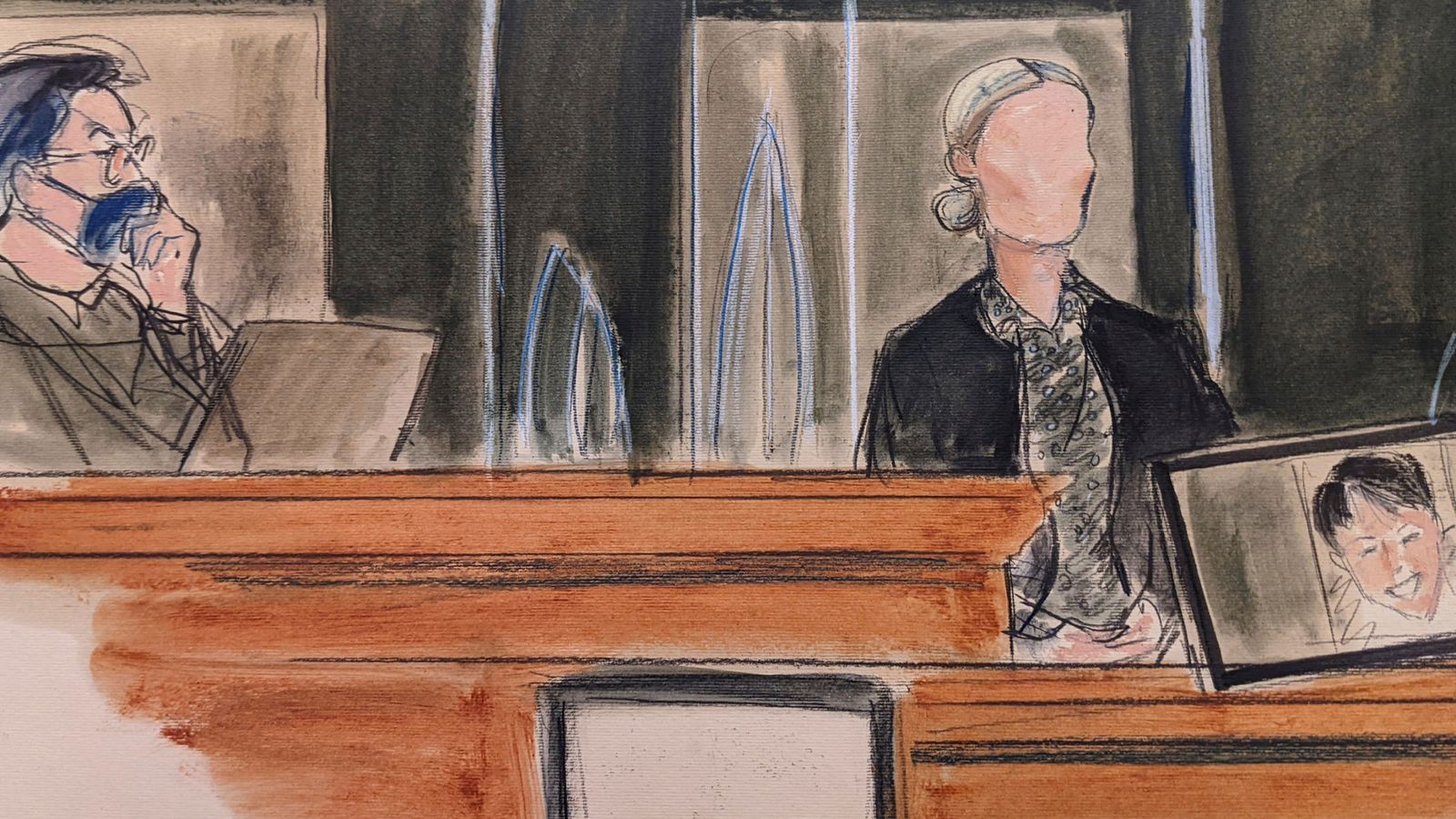 Warning: This report contains graphic descriptions of alleged sexual abuse of a child.

Spanning a 10-year period from 1994 to 2004, the 59-year-old British socialite’s charges involve four alleged underage victims – with the youngest just 14 years old at the time.

Maxwell, the daughter of former media mogul Robert Maxwell, could be sentenced to 80 years in prison if found guilty of all counts.

She has denied all of the charges and has pleaded not guilty.

So as the second week of her trial comes to an end, here’s what has happened since week one.

Monday: Second alleged victim says Maxwell ‘told me I was one of Epstein’s favourites’

The second alleged victim testified, saying Maxwell allegedly pressured her into giving Epstein sexual massages when she was still a teenager and told her she was “one of his favourites”.

The woman, now 44, said she was 17 and struggling to make friends after moving to Britain from France when she met Maxwell for tea at her London townhouse in 1994.

They became acquainted through a 35-year-old man she was dating.

Testifying under the pseudonym Kate, she said she returned to the townhouse weeks later while Epstein was there and she massaged his feet at Maxwell’s request.

A couple of weeks later, Kate said Maxwell asked her to come back to the house and give Epstein a massage.

When asked by a prosecutor whether she was a massage therapist, Kate said no.

She said Maxwell led her to a massage room and Epstein was there, wearing a bathrobe, and when he took it off he was naked.

The witness said Maxwell gave her some massage oil and closed the door, and then Epstein had a sexual encounter with her.

Tuesday: Third alleged victim says she was paid $300 for Epstein sexual massages when she was 14

The third alleged victim took the stand, saying she gave Epstein sexual massages when she was 14.

Carolyn, testifying under only her first name to protect her privacy, said another Epstein accuser, Virginia Roberts, introduced her to Maxwell.

“Virginia said: ‘Do you want to go to Palm Beach and give a wealthy friend of mine a massage?'” she said.

Over the course of the next four years, Carolyn said she returned to Epstein’s Palm Beach home more than 100 times and often two to three times a week to give him a massage.

Every time, she told the jury, it would involve some sexual contact.

The woman recalled how Epstein would touch her breasts and buttocks.

Carolyn said Maxwell would sometimes call her to schedule appointments with Epstein, during each of which she would be paid $300 to $400.

Pictures taken during a raid on Jeffrey Epstein’s £58m New York townhouse were shown to the jury.

The FBI found boxes of CDs and nude photos of women and girls in several rooms – including a so-called massage room – during the search on 6 July 2019.

Some had “evidence tape” sealing them but that had not been put there by police, the court heard.

The cache of digital photographs also included images of two women who have accused Maxwell of serving them up to Epstein while they were teenagers.

They are depicted in various states of undress, prosecutors said.

Pictures charting Maxwell’s relationship with Epstein were shown to the court, with one image taken at what appears to be the Queen’s log cabin on the Balmoral Estate.

The Queen and her family have been pictured sitting by what looks like the same cabin.

In other images, Maxwell was seen kissing and massaging Epstein.

A former boyfriend of Carolyn – the alleged victim who testified on Tuesday – corroborated her account.

Named only as Shawn to protect Carolyn’s identity, the man said he drove her and two other girls to Epstein’s estate in Palm Beach, Florida, multiple times in the early 2000s.

He would wait in the car for an hour until the teenagers emerged with $100 bills.

Shawn said he drove the girls to the affluent neighbourhood whenever he received a call from one of three women who worked for Epstein. One of them, he said, had a “proper English” accent.

Annie Farmer, who is the only one of four accusers to give evidence under her full name, testified Maxwell and Epstein forced themselves on her when she was 16.

She recalled how Maxwell instructed her to “get undressed” before giving her massage and rubbing her breasts while on a trip at Epstein’s New Mexico ranch.

Ms Farmer said she felt “frozen” and “surprised”, adding: “I wanted so badly to get off the table and have this massage be done.”

She also told the court that Maxwell wanted her to rub Epstein’s foot “because that was something she thought I should learn to do.”

Ms Farmer described another incident at a cinema in New York where Epstein reached for her hand and started “caressing” it before “rubbing” the bottom of her shoe, foot, and leg.

“I felt sick to my stomach,” she said.

What happened in week one of Maxwell’s trial