Storm Barra is barrelling into Ireland and due to hit the UK later this morning, with the weather system packing strong winds, heavy rain and snow, with the Met Office warning of a small chance of a “danger to life” in some parts due to the conditions.

Parts of west and southern Ireland are on red alert, and there are yellow warnings for wind in place across England, Wales, and Northern Ireland.

Thousands of people are still living without power in the wake of Storm Arwen, which knocked out electricity supplies to more than one million households 10 days ago – and Barra could bring even more disruption.

The prime minister said he met with the chief executive of Northern Powergrid, who told him those without power would regain their supply today at the latest.

Winds of over 130kph are forecast in Cork, Kerry and Clare, where red warnings are in place.

An orange level warning is in effect for much of the east and west coast.

Met Eireann, the Irish weather service, has warned that disruption to travel and the power supply are likely, while coastal flooding is expected.

Irish police are urging the public to avoid unnecessary travel, stay away from coastal areas and look out for fallen trees, flying debris and flooded roads.

Please secure, remove or store away:

Yellow wind warnings for most of UK

High winds are expected to affect most of the UK until midnight, causing travel disruption for many, and potentially hitting power supplies, the Met Office says.

Western parts will see gusts of up to 80mph at times across exposed coastal areas and 50 to 60mph inland.

For the rest of the country, those winds could get up to 50mph inland and 65mph on the coast.

The worst of the winds will be in the South West, Wales and Scotland, with a “small chance” of “injuries and danger to life” occurring from flying debris and large waves and beach material being thrown onto sea fronts, coastal roads and properties.

Roads and bridges may need to close, and there could be cancellations or delays on all types of transport. 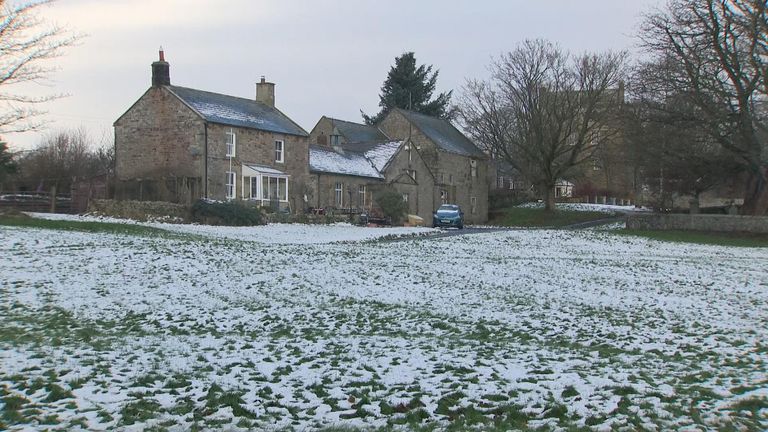 Heavy snow is expected across northern parts of Great Britain and will likely disrupt travel, especially on higher ground, according to the Met Office.

The warning will remain in place from 11am until midnight on Tuesday.

There could be delays or cancellations affecting trains and air travel, as well as problems on roads that could leave cars and passengers stranded.

The weather could lead to power cuts and disruption to mobile phone coverage and some rural communities could become cut off.

Two to five centimetres of snow is expected in many areas on higher ground, with 10 to 20cm likely in parts of the Southern Uplands and Highlands.

Strong winds will cause blizzards in areas with higher altitudes. Much of UK bracing for Storm Barra

In Northern Ireland, a yellow warning for rain and wind is in place until 9am on Wednesday.

The Met Office said “strong winds and heavy rain bring a risk of some travel disruption and flooding”.

They have warned of a “small chance” that injuries and danger to life could occur “from large waves and beach material being thrown onto sea fronts, coastal roads and properties”, or from fast flowing or deep floodwater.

Roads and bridges could close, buildings may be flooded, and travel could be affected by delays and cancellations.

Tiles could be blown off from roofs and power cuts could impact mobile phone coverage.