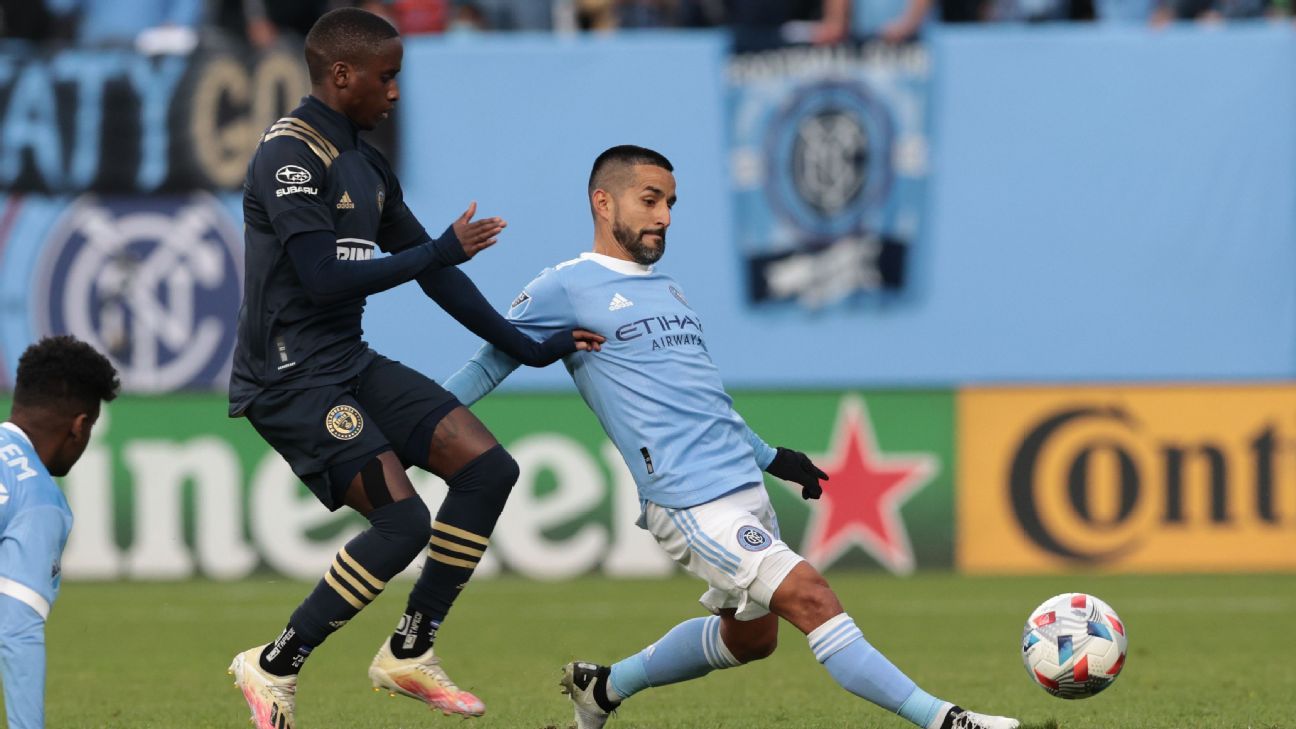 And then there were four. The MLS Cup playoffs conference semifinals saw Supporters’ Shield winners and record points scorers New England Revolution upset on home turf. On the other side of the bracket, fellow No. 1 seed Colorado Rapids were similarly dumped from the postseason in front of their fans.

The playoffs started with a field of 14 teams. Among the 10 clubs eliminated, the four with the most regular-season points all are now watching from home.

It’s been dramatic knockout soccer full of upsets, and there’s no reason to believe that’s going to stop now that we’ve reached the conference final stage. ESPN’s Jeff Carlisle, Kyle Bonagura, Caitlin Murray, Dan Hajducky and Austin Lindberg preview both of this weekend’s matches, predicting which clubs will participate in the league’s showpiece event on Dec. 11 (3 p.m. ET, stream live on ABC) and whose players will be anxiously awaiting the 2022 preseason while chewing on the bitter taste of defeat.

Sunday’s final isn’t the one most predicted, but it still features two of the better teams in the Eastern Conference.

The Blues have done well to make it this far, taking out No. 5 Atlanta and top-seeded New England along the way, but Sunday’s match will be NYCFC’s ultimate test. New York was already without Anton Tinnerholm (torn Achilles) and Keaton Parks (blood clot surgery), but now it will be without Golden Boot winner Valentin Castellanos due to the pair of yellow cards he picked up against the Revs. James Sands is an injury worry as well. Castellanos’ absence is every bit as big as it looks, as the Argentine scored in both of NYCFC’s playoff wins so far.

So who will step in to take his place? In the two games Castellanos missed this season, Talles Magno deputized, although he seems to have fallen out of favor of late. Ismael Tajouri-Shradi could also step in. He has been effective as a super-sub/spot starter in his four seasons with NYCFC, and tallied seven times in 2021, although most of his playing time came as a wide midfielder.

Heber is a more like-for-like option, but a substitute role seems more likely. The Brazilian returned to the field in September after recovering from a torn ACL in his right knee, but has logged just 95 minutes in seven substitute appearances since then. Regardless, the onus will be on Jesus Medina and Maxi Moralez to pick up the attacking slack for NYCFC.

Philadelphia will be at close to full strength now that defender Olivier Mbaizo has cleared the league’s health and safety protocols, and the question for the Union is the same as always: Where will the goals come from? Kacper Przybylko — the Union’s version of the Phantom Menace — is the most likely source, having scored 12 times during the regular season. The team’s defenders, Jakob Glesnes foremost among them, are capable as well. But keep an eye on Daniel Gazdag. The scorer of Philadelphia’s equalizer against Nashville perked up over the last month of the regular season, and he’ll need to be at his best against a stingy NYCFC defense. — Carlisle

NYCFC showed their resilience in surviving the last moments against New England — when they were essentially down to nine players — and then prevailing on penalties. But the Union always seem to find a way, and with Castellanos sidelined, the home side should prevail. — Carlisle

As tempting as it is to pick NYCFC after they knocked off New England, it’s hard to go with the Pigeons without Castellanos in the lineup. This Philadelphia team isn’t as good as the one that won the Supporters’ Shield a year ago, but it’s good enough to win MLS Cup. — Bonagura

New York City FC is a very good team plenty capable of going to Chester, Pennsylvania, and staging an upset — but it becomes difficult without Castellanos. Remember, he was the one who scored NYCFC’s second goal in their 2-2 draw to the Revs on Tuesday. The Union still don’t have the big-game players you can count on to score goals when the stakes are high, but they do have Andre Blake, runner-up for Goalkeeper of the Year, who ought to keep them in it long enough for Philly to find a game winner at home. — Murray

A round of applause to NYCFC for that howitzer of a match against New England. I said going in that anything other than a Revs victory would be an upset of historic proportions. That’s exactly what we got in one of the most entertaining MLS matches in recent memory. Unfortunately for NYCFC, they lost Castellanos to a red card in the process and youngsters Sands and Tayvon Gray got banged up. Conversely, Philadelphia stopped red-hot Nashville in its tracks, Blake holding it scoreless in a PK shootout. This feels like Philly’s match to lose. — Hajducky

Look, being without Castellanos puts NYCFC on the back foot before a ball has been kicked, but they’ve already lost Tinnerholm and Parks for the season. Ronny Deila’s team is no stranger to the next-man-up philosophy, and with the likes of Moralez and (the admittedly maddeningly inconsistent) Medina in place to shoulder the attacking burden, I think the Bronx outfit has what it takes to spring another upset. — Lindberg

If Real Salt Lake are to extend their magical playoff run and reach MLS Cup, it will represent a significant reversal of fortune from the regular-season series against Portland. The Timbers swept all three meetings between the clubs, outscoring RSL 12-4 in the process, with all of them coming in August or later. In Salt Lake’s last trip to Portland, the Timbers won 6-1 in what was one of the most lopsided games in MLS all year.

This isn’t the regular season, though, and since the playoffs began the unpredictable nature of a knockout competition has been on full display. After being held without a shot and still advancing against Seattle via penalties in the first round, RSL were better against Sporting Kansas City. They created the better chances and erased an early 1-0 deficit to win 2-1 on a stoppage-time goal from Bobby Wood. Both wins came without Albert Rusnak, who tested positive for COVID-19, but the captain will return for the game against Portland.

The Timbers return to the conference final for the fourth time since entering MLS in 2011, with the latest coming in 2018. After a tough stretch in October, Portland ran off three straight wins to end the regular season before a 3-1 win against Minnesota United and 1-0 defeat of the top-seeded Colorado Rapids to open the playoffs. Portland will be without midfielder Sebastian Blanco due to an apparent hamstring injury and forward Dairon Asprilla, who was red-carded late against Colorado. Those two combined for 17 goals during the regular season, ranking second and third on the team behind leading scorer Felipe Mora. — Bonagura

Major League Soccer is here! Coverage of all 27 teams with live games, replays, highlights.
Sign up now to stream soccer on ESPN+

RSL have ridden the role of underdog all the way to the Western Conference final, but are they really the underdog now? They’re getting players back and Portland will be without Blanco and Asprilla. It’s the playoffs, and Diego Valeri is chomping at the bit to play a bigger role, so of course the Timbers will win. — Carlisle

With Rusnak expected to be back in the lineup for RSL and the Timbers without Asprilla and Blanco, the scales tip back toward the visitors. Salt Lake is clinging to that team-of-destiny vibe, and it would be very MLS for a team that snuck into the playoffs with an interim coach to play for MLS Cup. — Bonagura

I bet against RSL twice already, and twice I got burned in my predictions for it. This might be me upsetting the soccer gods and messing with their destiny, but I’m going with RSL here. Sure, their head coach quit in the middle of the season to become an assistant at a less dysfunctional club. Sure, two MLS clubs have found new owners in the past year and RSL still sit without a buyer after their previous owner walked away amid allegations of racism and sexism. Sure, the Timbers were consistently better than RSL all year long. But why can’t RSL go to Portland and pull out the sort of upset MLS is known for? If Blanco, the heartbeat of the Timbers, is injured, all while Asprilla — also known as “Mr. November,” a nickname that covers October through December — is out with a red card, then RSL have a fighting chance. After the Washington Spirit won the NWSL last month amid similar chaos, I believe RSL can do the same in MLS. — Murray

It’s remarkable that Real Salt Lake are even here. Their manager left in late August — taking a baffling demotion to assistant coach with Seattle — the team’s ownership is in flux, and they eked past perennial title contender and first-round opponent Seattle in a penalty kick shootout while registering zero shots. But they also outshot, out-possessed and outplayed Sporting KC in the conference semis. Interim manager Pablo Mastroeni has his feisty squad believing it’s them against the world and, hell, maybe it is. I’m a sucker for a Cinderella story; the Carl Spackler-ian Real Salt Lake move on to the final. — Hajducky

Consider yourselves jinxed, Utahns. Sorry. But without Blanco, Portland has lost the stir that’s mixed its drink for the final three months of the season. RSL have the belief and the momentum to take their Cinderella run all the way to MLS Cup. — Lindberg