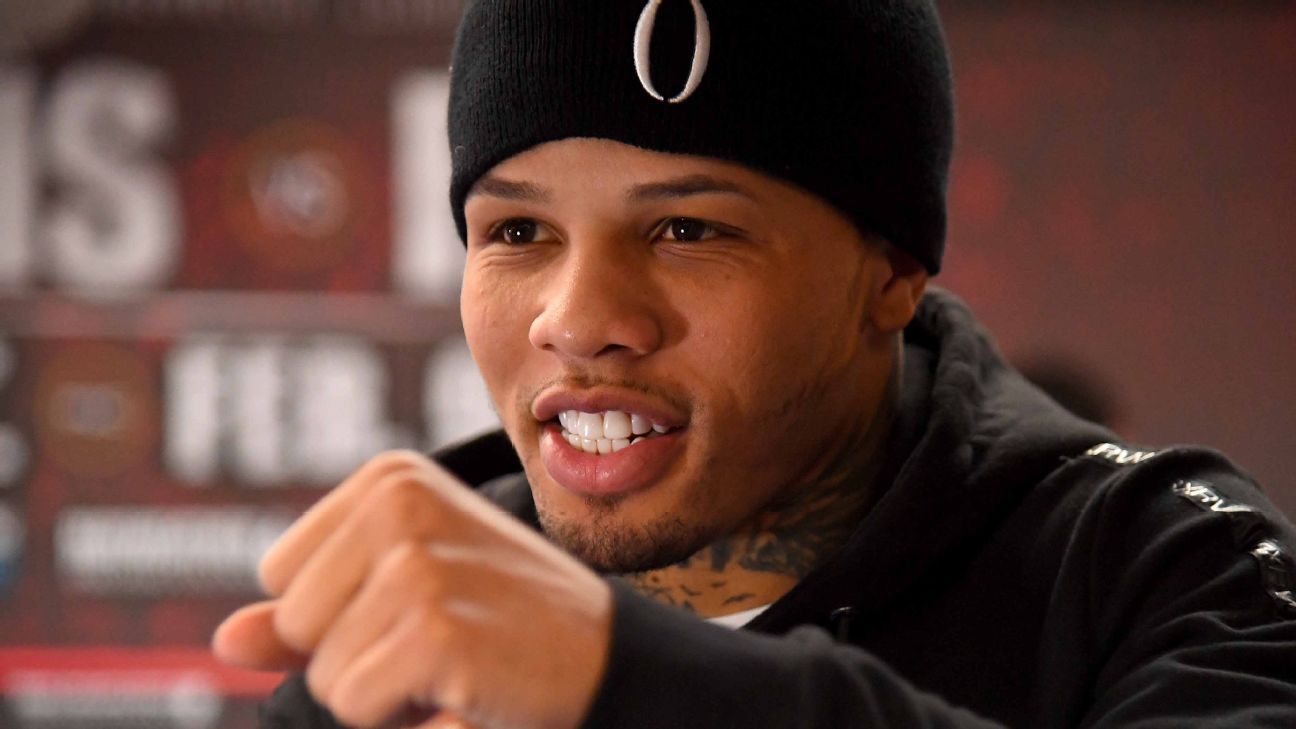 LOS ANGELES — Floyd Mayweather and Gervonta “Tank” Davis were vacationing together in Miami several years ago. The two lounged on Mayweather’s yacht and rode bicycles in South Beach. Davis got a taste of the life of luxury that Mayweather enjoys as the biggest pay-per-view draw in boxing history.

During that trip, Mayweather imparted upon his protégé, who was then in his early 20s, that one day all of those things — the spoils of a fortune made in boxing — would be his.

Not could be. Would be.

The next step in Davis’ evolution comes on Sunday, in a pay-per-view headliner against Isaac Cruz at Staples Center. Davis will be defending his WBA “regular” lightweight title. Cruz is a replacement opponent for Rolando Romero, who was pulled from the fight in October following sexual assault allegations.

Cruz is a durable fighter from Mexico who has not lost in five years, but Davis is a 12-to-1 favorite at Caesars Sportsbook. Those details matter, just not as much as the bigger picture — where Davis is now, and where he will be in the future.

Davis, 27, has gone back and forth over the last several years between being one of the preeminent knockout artists in boxing and dealing with trouble outside the ring — a charge for domestic violence in 2020, and most recently, an indictment after a hit-and-run crash in late 2020.

In the ring, there have been criticisms that he’s not facing the toughest competition. Combine all of those things with in-ring comparisons to Mayweather, and stir, and you have the complicated state of Davis’ career.

With Mayweather as his promoter and mentor, “Tank” seems to be right on the cusp of superstardom in boxing, and on the verge of being one of the biggest box-office attractions in the combat sports world. He’s stopped 16 straight opponents. His Halloween 2020 knockout of Leo Santa Cruz landed on every year-end highlight reel.

A spectacular win over Isaac Cruz could be the springboard from which Davis launches himself to new heights in 2022, with potential fights against Josh Taylor, Devin Haney, Oscar Valdez or Ryan Garcia looming.

“I’m just trying to expand,” Davis, 27, told ESPN. “Not as a fighter. I want to be more like an all-around-the-board star. An athlete. Just building myself as one of the top guys. Not just in the sport, but outside the sport, too.”

Mayweather recalled that Miami story at a news conference in October. He’s told it before over the years. And it’s usually followed by a jaw-dropping statement from Mayweather, who turned to Davis on his right and uttered it again that afternoon at Staples Center.

“Nothing happens overnight,” Mayweather told Davis. “You’re still growing and you’ve got the potential to surpass me. In due time, we’ll see.”

Davis appreciated Mayweather’s mentoring. How could he not? Mayweather retired at 50-0, and he is regarded as one of the best fighters ever and one of the best businessmen in boxing history. His last appearance netted him eight figures in a low-risk exhibition against a social-media influencer. But when Mayweather talks about Davis one day surpassing him, Davis tries to let it go in one ear and out the other.

Davis said he has a friend who compares him to Mayweather and Mike Tyson. The former because of his financial potential and the latter because of his unbridled power in a short, stocky frame. Davis is barely 5-foot-6, but hits like, well, his nickname.

“I be thinking like, ‘Damn, he’s comparing me to all these guys,'” Davis said. “This makes me try harder so I can push myself to see if I can be the next — not the next them, but have my own legacy. Have a big impact on the sport.”

“He’s really, really focused now,” Ellerbe said. “Really, really has tremendous discipline. I’m really, really excited, not only for this fight, but for what’s ahead in the future. He definitely has matured a great deal. I’m very proud of him for that. Me and Floyd, [PBC creator] Al [Haymon], [Showtime Sports president] Stephen [Espinoza] — we’ve all seen it and we’re very, very impressed.”

But there are things that the man out of the ring can improve upon. In March, Davis was indicted in his hometown of Baltimore on 14 charges related to a November hit-and-run crash. Davis is facing seven years in jail (if convicted on all charges) and could go to trial next year. In February 2020, Davis was charged in Miami after grabbing his girlfriend and pulling her out of her seat during a college basketball game, an incident that was caught on video. Davis is still facing two misdemeanor battery counts stemming from that night, with the next hearing scheduled for Dec. 9, per online records.

Maybe Davis hasn’t achieved household name status yet, but there’s a feeling that he’s getting closer. Ellerbe said he believes Davis is right there with the likes of Canelo Alvarez, Tyson Fury, Errol Spence Jr. and Deontay Wilder as one of the biggest stars in boxing. So how does he actually get to that next level? By just doing what he’s been doing each time he goes into the ring, Ellerbe said — knocking opponents out in vicious fashion.

“This is a process with Tank,” Ellerbe said. “But Tank is on the fast track solely because he has the ability to get guys out of there. It’s what the fans want to see. The fans want to be entertained at the highest level. With boxing being a brutal sport — a very violent sport — that’s what Tank gives them.”

Mayweather was never known for being a big puncher. That’s one attribute where Davis might have an advantage over his mentor, though Mayweather’s learned ability to connect with fans and draw money is unparalleled despite his lack of flashy KOs.

But, like Davis, Ellerbe isn’t a big fan of those comparisons, at least at this point in Davis’ career.

“They’re two totally different fighters who bring different things to the table,” Ellerbe said. “I never would want to compare the two, because Floyd has a historical career. The thing about Tank is he has an unlimited ceiling. Tank does have the ability to attract the masses, because he’s the most exciting fighter in the entire sport.”

Davis said he and Mayweather haven’t talked too much lately. When Davis is in training camp, he said Mayweather usually lets him do his thing and the two will debrief after the fight. When Davis fought Mario Barrios on June 26, Mayweather was positioned near his corner. After the ninth round in a close fight, Mayweather got closer and told Davis he was down on the cards.

Davis ended up stopping Barrios via TKO in the 11th round to win the WBA title. It was just Davis’ second pay-per-view headlining appearance, and the Cruz fight will be his third. Both events did solidly at the gate and on pay-per-view. Espinoza told CBS Sports last year that Davis is “well ahead” of Mayweather at this stage of his career in terms of putting fans in seats.

“We have guys with great names [in boxing], but not drawing power,” Mayweather said at the October press conference. “One thing about Tank, he has drawing power.”

If Davis beats Cruz, there will be a strong desire among fans for him to take a big fight at 135 or 140 pounds. ESPN ranks him No. 4 in both weight classes. That decision, Davis said, will be left up to Mayweather Promotions. When asked if Davis would fight someone like a Haney or Garcia or Teofimo Lopez next year, Ellerbe replied “Why not?”

“[Those fighters] just have to focus on doing the things that they need to do and that’s continuing to raise their profile,” Ellerbe said. “Right now, [Davis is] levels above his peers when it comes to being an attraction. He’s in a lane all by himself. There’s nobody even close to that. My suggestion to all of them is continue to raise their profile. We’re not going anywhere. We’ll fight anybody.”

Davis will likely have to deal with legal problems over the months to come, but next year, though, depending on the outcome of those cases, Davis has a chance to realize his potential in boxing. Maybe even one where some of those fantasies Mayweather told him about on that yacht start coming to fruition. Davis knows superstardom is behind one of these many doors in front of him. It’ll be up to him to choose the correct one.

“Every fight is a step closer than I was,” he said. “I can’t say this fight does it or the next fight does it. I just want to keep progressing and go. Keep walking forward and progressing every day.”

Former Sex Pistols’ frontman John Lydon fails to secure Eurovision place
Sunak survives first 100 days, but there is little warm glow around leadership | Beth Rigby
Westminster’s ‘nepo babies’ are here to stay – whether we like it or not | Adam Boulton
Sunak urged to ‘come clean’ over what he knew about Zahawi tax scandal
Police release image of new witness they want to speak to after disappearance of Nicola Bulley