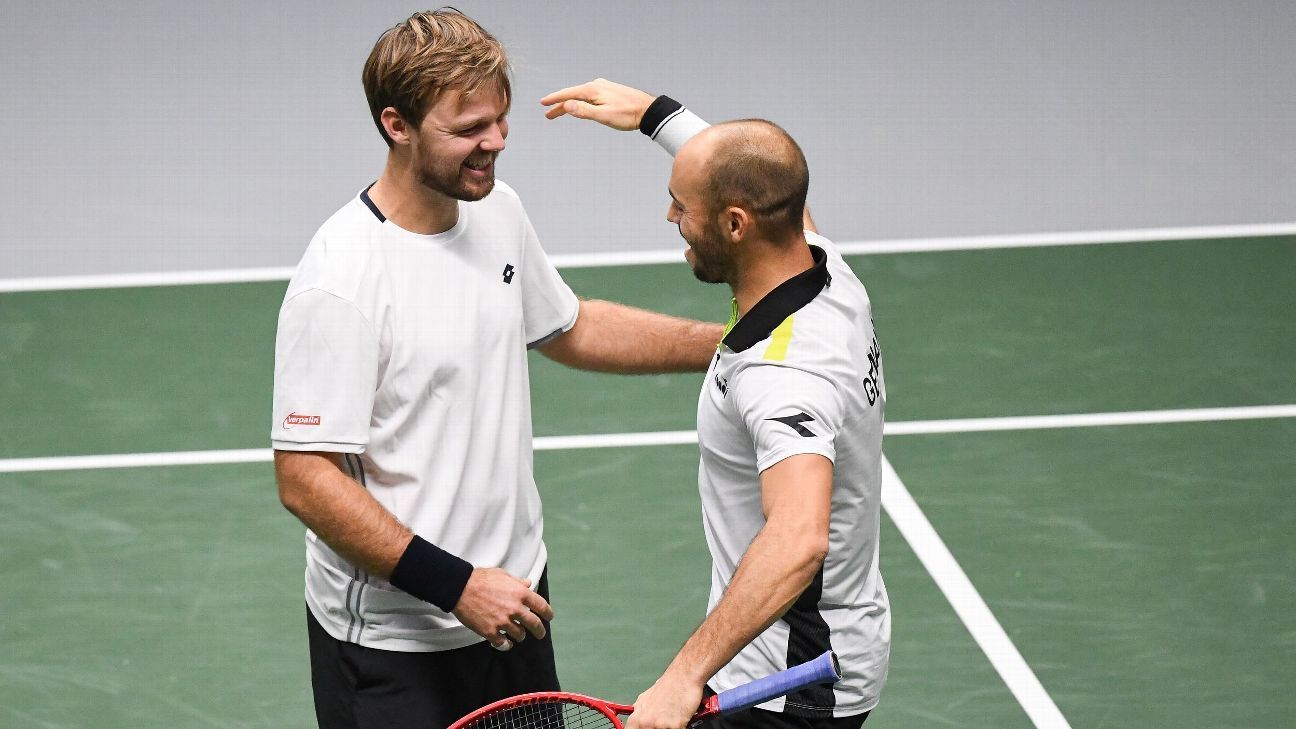 INNSBRUCK, Austria — Germany came from behind to upset Britain in the Davis Cup quarterfinals on Tuesday after Kevin Krawietz and Tim Putz won the decisive doubles match.

Krawietz and Putz saved four set points in the tiebreaker before taking the opening set and won the second tiebreaker after winning seven straight points from 5-0 down.

“This is an incredible team achievement,” Krawietz said. “We have a great atmosphere in the team from day one.”

Daniel Evans had given Britain the lead by beating Peter Gojowczyk 6-2, 6-1, but Jan-Lennard Struff pulled Germany even with the 10-time champion by beating Cameron Norrie 7-6 (6), 3-6, 6-2.

Germany has won the Davis Cup three times but not since 1993. In its first semifinal since 2007, Germany will meet either Sweden or the team from Russia on Saturday. Croatia will face either Serbia or Kazakhstan in the other semifinal.

“We have done everything to win,” Struff said. “We hope our journey goes on and the next goal is to win the semifinal.”

Britain was seeking its fourth semifinal berth in the past six editions of the tournament. It last won the event in 2015, and it had beaten Germany 2-0 when the teams also met in the quarterfinal two years ago.

“Everyone is gutted, this is a tough day to swallow,” Britain team captain Leon Smith said. “It could have gone either way, but it wasn’t to be today. They gave their best effort but sometimes that is not enough, and Germany deserves to go through.”

Struff said his win over Norrie was “one of the most important victories of my career. Cam Norrie is a real fighter. I started very well, went 4-1 up, but when you take so many risks, you can expect that more mistakes will come.”

The 12th-ranked Norrie failed to serve out the opening set against Struff when leading 6-5, and the Briton missed two set points in the tiebreaker.

One break halfway through the set was enough for Norrie to take the second, but the 51st-ranked Struff won the third by taking four games in a row.

“At the end of the match I managed to play as aggressive again as at the beginning,” Struff said.

In the first singles match, Evans built a quick 4-0 lead and didn’t face a break point all day. Gojowczyk earned only two points on Evans’ serve in the second set and double-faulted for the fourth time on match point.

“I tried to get some rhythm early on,” Evans said. “I played well from start to finish.”

Gojowczyk was a surprise pick by Germany captain Michael Kohlmann. The 86th-ranked player replaced Dominik Koepfer, who is ranked 32 places higher, and played in the two group matchups Germany won against Austria and Serbia.

Gojowczyk had never played Evans in an ATP level match but beat the Briton twice in lower ranked tournaments, in 2013 and 2016.

No spectators were allowed in the OlympiaWorld arena amid a nationwide lockdown in Austria to fight the spreading of the coronavirus.

Madrid will host the rest of the Davis Cup finals.

Quick Charge Podcast: February 6, 2023
Dominic Raab should be suspended over bullying claims, says ex-Tory chair
Decision to develop a ‘Britcoin’ digital pound to be made by 2025
Government responds to Liz Truss claim she was not given ‘realistic chance’ to cut taxes
Weird Alibaba: You can literally buy a 10 ft. long rideable electric dinosaur