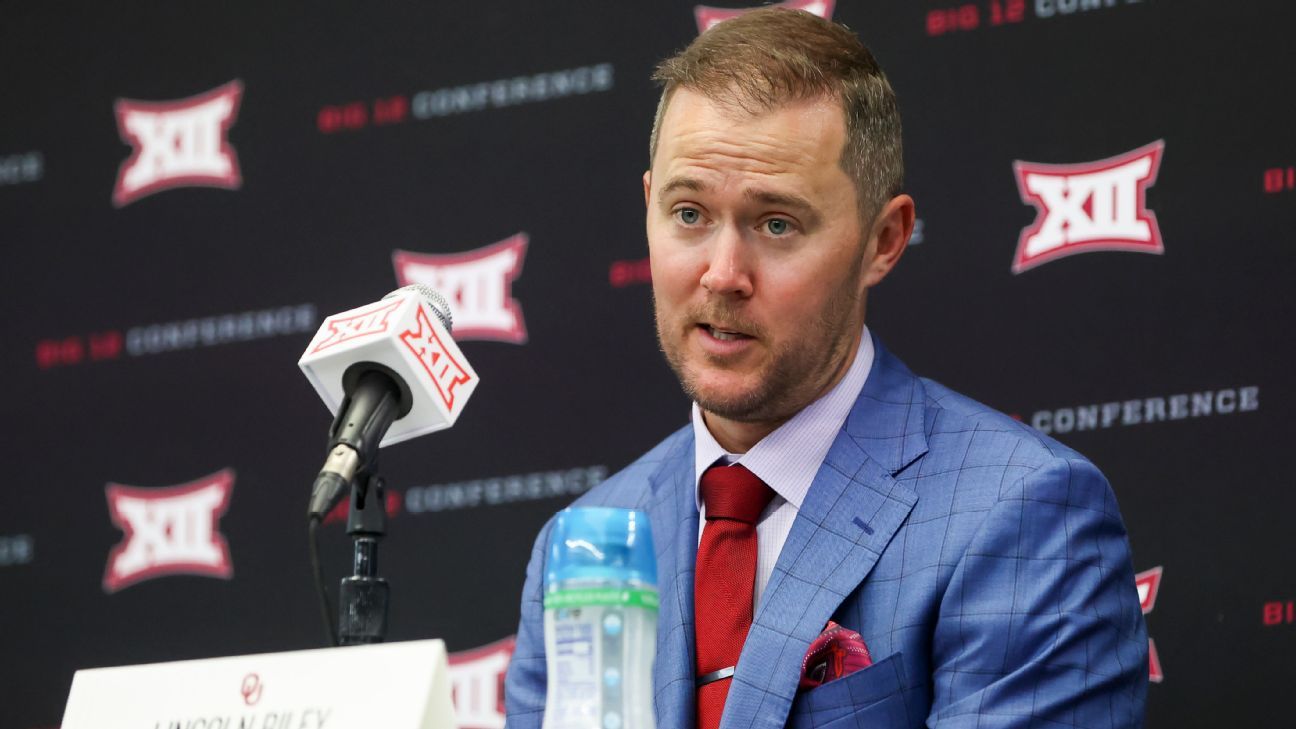 Six years ago, then-USC athletic director Pat Haden ushered a handful of reporters into an unglamorous conference room and announced that the school was putting Steve Sarkisian on an indefinite leave of absence. Sarkisian would be eventually fired, but on that Sunday, Haden announced that Clay Helton would be the interim coach.

It was a pivotal moment. Helton had no head-coaching experience, but his lack of baggage was appealing to the program and his affability and stability made him the ideal candidate to save face. Yet USC needed to save more than just face. It needed to revive its football program. Six years later, Helton failed to do that and is gone. So are Haden and his successor, Lynn Swann.

That’s been the USC story for the past decade: a game of musical chairs at the top, while the guy calling the shots on the field was not able to get USC to the top. But new athletic director Mike Bohn has ushered in a clean slate and, now, a blockbuster hire. By landing Lincoln Riley from Oklahoma to be the Trojans’ next head coach, USC has officially kick-started a new era. So, how does Riley fit at USC, and what are the challenges and opportunities that await him?

What are the expectations for Riley at USC?

A home run hire brings with it home run expectations. Had USC hired a less accomplished coach, it could be viewed as reshaping a program that’s fallen on hard times over the past decade. With Riley in tow, however, the expectations for success will be more or less immediate. It’s clear that the message USC wanted to send by hiring Riley is that the Trojans are ready to win again at all costs.

The fact that Riley took the job signals, in part, that USC is still one of the best jobs out there. The name brand and infrastructure have taken plenty of hits, but USC’s position on the West Coast and in a conference that’s begging for a team to truly dominate it makes the potential sky high. It’s why the immediate expectations are a Pac-12 title, at the very least, and certainly a College Football Playoff berth sooner rather than later. Riley has led Oklahoma to three playoff appearances in four years, while USC has yet to even sniff the playoff. And it’s safe to say that it’ll be easier to make it back there in the Pac-12 than with Oklahoma once the Sooners join the SEC.

There’s a lot of work that needs to be done to get USC back on top, and it won’t be overnight, but Riley’s pedigree, on and off the field, means the Trojans are primed to take the fast lane back to success. — Paolo Uggetti

What challenges does he face?

Before Bohn arrived at Heritage Hall, USC had continued to get in its own way with internal hires — athletic directors Pat Haden and Lynn Swann, coaches Lane Kiffin and Steve Sarkisian — that backfired on and off the field. There have been a slew of scandals at the university, a new president and a plethora of other controversies.

The product on the field, meanwhile, has been far below the USC standard. In the past four seasons, USC has gone 22-20 and has struggled to find consistency and an identity on offense, while losing any semblance of physicality on defense. Whether due to injury or poor decision-making, the Trojans have cycled through several quarterbacks, including highly touted prospects like JT Daniels, and have yet to find one who brings the level of play and excitement that past quarterbacks have. In the trenches, they’re no longer consistently producing All-American linemen who can compete with the SEC and Big Ten powerhouses.

All of this has amounted to another challenge: a general sense of disappointment and apathy from the USC fan base. Just look at the pictures of the near-empty LA Coliseum that have surfaced every Saturday this season. While there has been a positive cultural shift behind the scenes in the past few years, Riley will have a tall task in turning that into a tangible one on the field.

The reality is the Trojans can no longer fully coast on the legacy that Pete Carroll, Reggie Bush and Matt Leinart and the rest of those teams left behind. For years, it appeared the people inside the program lacked the self-awareness to see how they were losing ground to the rest of the college football world. But it seems the new administration is aware of the work that needs to be done — hiring Riley only confirms that.

Still, it won’t be easy. The Trojans are currently a fixer-upper. USC has always had the right tools at its disposal, and now Riley will be faced with the burden of fulfilling expectations at a place that has never stopped believing it should be at the top of the college football world. — Uggetti

USC has struggled to keep Southern California players the past few years as fellow blue bloods like Oklahoma, Alabama and Ohio State have dipped into the state and swiped top recruits away. Just look at the quarterbacks leading some of the country’s top teams: Alabama’s Bryce Young, Ohio State’s C.J. Stroud and Ole Miss’ Matt Corral are all California products.

Riley, who has coached two Heisman-winning quarterbacks, can fix that immediately. In fact, he might already be fixing that, as we speak. Five-star quarterback Malachi Nelson, who plays at Los Alamitos High in California, had committed to Oklahoma. Now, he can still play for Riley and stay home. So can five-star wide receiver Makai Lemon. Five-star running back Raleek Brown, an Oklahoma commit from Southern California, told ESPN on Sunday that Riley’s move changed everything for him.

From a recruiting standpoint, Riley’s move is seismic. His presence on the West Coast will have a trickle-down effect for other programs in and out of the region. And for USC, it allows the Trojans to regain ground in the West while being able to recruit nationally at a high level. They are still the Pac-12 team in the best position to compile a roster to win a national championship; they have just squandered that opportunity in the past few years. Case in point: USC has only seven total commitments in the 2022 class with early signing day a few weeks away. Meanwhile, Oklahoma is in line for another top-10 class. — Uggetti

What does it mean for USC’s offense?

There is a prevalent idea that USC needs to play a certain way. Pro-style, run the ball, etc. Those voices grew even louder after the Air Raid installed by Graham Harrell didn’t result in the type of success USC expects. It’s a ridiculous way to look at things, and it will be comical to see those who wanted to see USC go back to its roots pull a quick 180 now that Bohn landed Riley, who is arguably college football’s most respected offensive coach right now.

Riley runs the ball more than USC did under Harrell, but the way he built his roster at Oklahoma is very similar to how USC is already constructed. Over the past three years, Oklahoma ran the ball 46.9% of the time to USC’s 37.8%. Of Oklahoma’s total yards, 59.2% percent came through the air, to 72% for USC. Riley’s reliance on more mobile quarterbacks in recent years — Kyler Murray, Jalen Hurts, Caleb Williams — represents a trend USC has never really embraced. The Trojans have had athletic quarterbacks in the past, but no true dual threats in the same mold as Riley’s QBs at Oklahoma. Baker Mayfield’s success under Riley shows that’s not necessarily a requisite, but the expectation is Riley will prioritize more mobile quarterbacks in the future. — Kyle Bonagura

As the prestige of the Pac-12 eroded over the past several years, the common solution for its troubles always revolved around USC. While there have been other schools that have experienced high-level success in the past decades — most notably Oregon, Washington and Stanford — none of them has remotely enough cachet to resonate nationally in the same way USC can when it hits on all cylinders.

The Pete Carroll-era Trojans are the prime example, of course, and as exciting as Oregon’s Chip Kelly teams were and as well as Mario Cristobal has recruited recently, it’s just different when it’s happening in Los Angeles. A dominant USC has the potential to increase the value of the conference’s media rights deals. It adds a layer of credibility to the conference that doesn’t currently exist. If USC reaches its potential, it will force other schools to make investments to try to keep up.

With Riley on board, those things seem not only possible, but are the expectation. His arrival will undoubtedly make it more difficult for teams to win the Pac-12, but the trickle-down effect should help the entire conference improve its footing compared to the rest of the county. — Bonagura