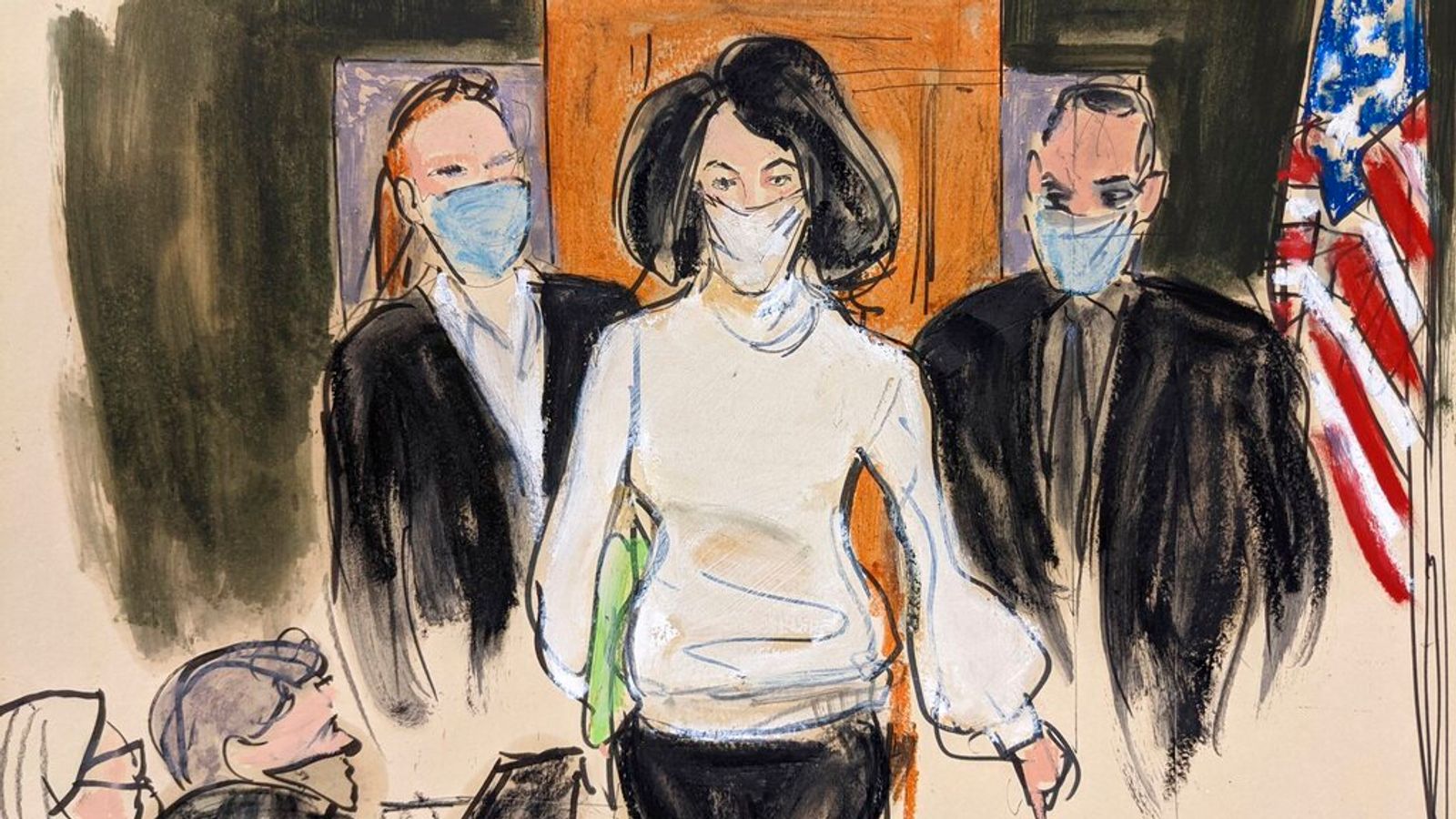 Ghislaine Maxwell targeted young girls and manipulated them before “serving them up for sexual abuse”, a US prosecutor said in her opening statement in the New York trial of the British socialite.

The 59-year-old former girlfriend of Jeffrey Epstein faces six counts of enticing minors and sex trafficking over a 10-year period.

As her trial began, prosecutors described the British socialite and Epstein as “partners in crime” who made the sexual abuse of teenage girls seem normal and casual.

Maxwell could be sentenced to 80 years in prison if found guilty of all counts.

The trial got under way after a slow start on Monday, with Maxwell attending court in a white long-sleeved top and white-coloured mask.

Twelve jurors and six alternates were sworn in after being selected this morning to hear the case, which is expected to last six weeks.

“She preyed on vulnerable young girls, manipulated them, and served them up to be sexually abused,” she told jurors.

Ms Pomerantz also said Maxwell and Epstein “were dangerous predators who sexually exploited and abused” children for a decade.

She described Maxwell as “essential” to Epstein’s abuse of the girls, in a bid to undermine the defence’s expected
argument that she was not aware of his alleged crimes.

“Sometimes, she was even in the room for the massages herself, and sometimes she touched the girls’ bodies,” Ms Pomerantz said.

“And even when she was not in the room, make no mistake: she knew exactly what Epstein was going to do with those
children when she sent them to him inside the massage rooms.

“She was in on it from the start. The defendant and Epstein lured their victims with a promise of a bright future, only to sexually exploit them.”

In her opening statement on behalf of Maxwell, defence lawyer Bobbi Sternheim said: “Ever since Eve has been blamed for tempting Adam with an apple, women have been blamed for things men have done.”

She said that Maxwell is “not anything like Jeffrey Epstein”, adding that he was the “proverbial elephant in the room”, and that the memories of the accusers had been “manipulated”.

“Yes, Jeffrey Epstein manipulated the world around him and the people around him, including Ghislaine,” Ms Sternheim told jurors, adding: “Ghislaine Maxwell is on trial as a scapegoat for Epstein.”

The charges involve four alleged underage victims over multiple locations from 1994 until 2004, with the youngest said to have been 14 years old at the time.

The long-awaited trial started not with a bang but a whimper as Judge Alison Nathan spent four and a half hours wrangling potential jurors, Sky’s political correspondent Joe Pike reports from the courtroom in New York.

One was dismissed after admitting he had discussed the case with friends. Another complained of financial hardship: that they would not be paid by their boss throughout jury duty – the judge phoned their employer and paid leave was approved. A third potential juror said their spouse had booked a surprise Christmas holiday that would clash with the trial.

Unlike a UK court where the defendant is in a dock, Ghislaine Maxwell sat at a desk alongside her lawyers taking notes. The black mask and dark clothing she wore in pre-trial hearings have now been replaced with a white mask and light-coloured jumper. Her sister Isabel was also in court wearing a beret.

The jury of 12 people with six alternates have now been sworn in, and warned not to communicate with anyone about the case including friends and family. “You are making a commitment to resist that temptation”, Judge Nathan said.

US prosecutors allege that Maxwell – a former employee and romantic partner of Epstein’s – gained the girls’ trust by taking them to the cinema, sending them gifts such as lingerie and discussing sexual topics, according to a 2021 indictment.

Maxwell also faces two counts of perjury which will be tried separately.

She has pleaded not guilty to all the charges and the trial is expected to last for six weeks.

Her lawyers claim that prosecutors are using the daughter of late British media magnate Robert Maxwell as a scapegoat after being unable to convict Epstein.

American financier Epstein died by suicide at 66 in 2019 in a Manhattan prison cell while awaiting trial on sex-abuse allegations.

“Left with no fish to attempt to fry, the government belatedly turned to Ms Maxwell,” her lawyers wrote in a filing from 4 February.

Prosecutors have also said that Maxwell encouraged the girls to massage Epstein while fully or partially nude.

In some cases, Epstein or Maxwell would pay the girls or offer them money for travel or education.

“Victims were made to feel indebted and believed that Maxwell and Epstein were trying to help them,” prosecutors wrote in the indictment.