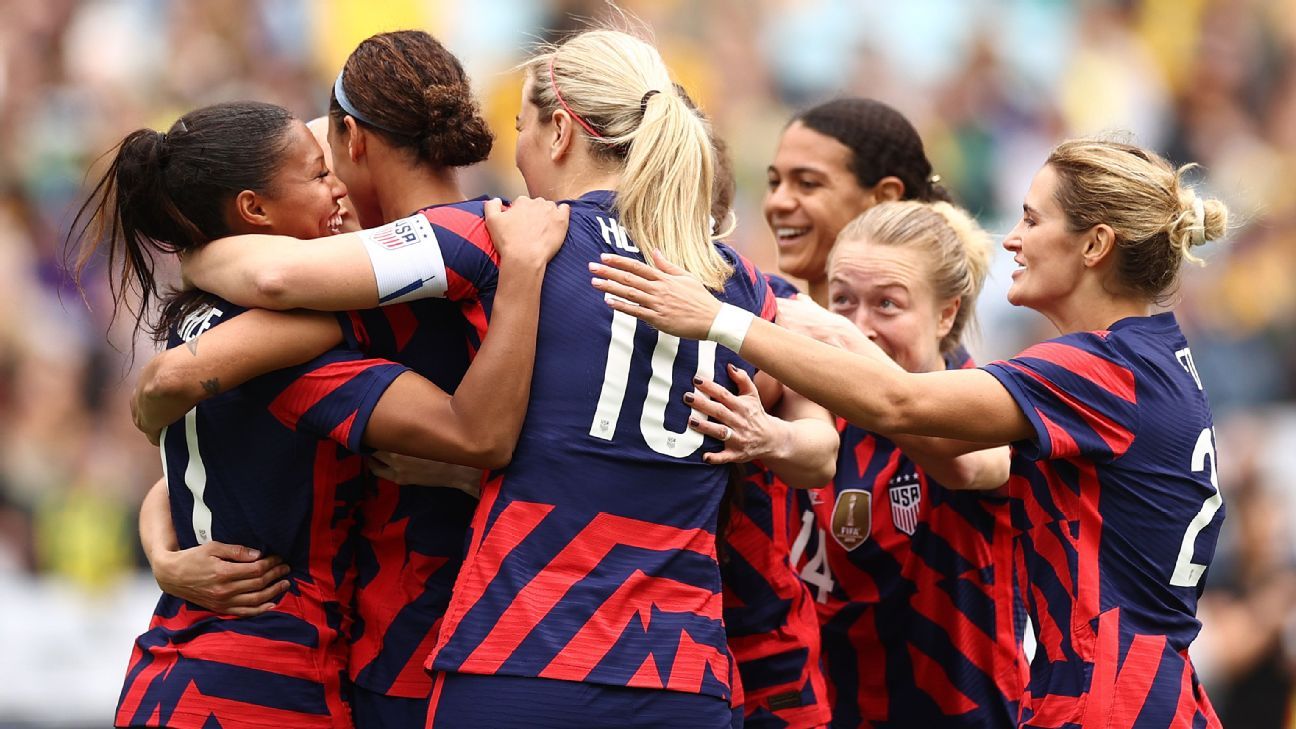 A game Matildas coach Tony Gustavsson intended to treat as a World Cup final dress rehearsal instead proved a reality check, with the United States handing Australia a 3-0 defeat in Sydney.

A record home Matildas crowd of 36,109 fans packed Accor Stadium but they were silenced after just 24 seconds when Ashley Hatch pounced on a series of defensive lapses to snatch the lead.

Rose Lavelle doubled the lead in the 49th minute, with skipper Lindsey Horan adding a third from the penalty spot in the 68th.

U.S. goalkeeper Casey Murphy, the first of four debutants in a second-string line-up, denied Australia at every turn.

The young centre-back pairing received a baptism of fire when Australia turned the ball over shortly after kick-off.

Nash didn’t get enough power behind a clearing header, and Lynn Williams nodded the ball on for a surging Hatch, who had escaped Nevin’s attention.

The teams traded chances as the game opened up, and Sam Kerr forced a top-drawer save from Murphy with a brilliant, powerful effort in the 33rd minute.

Then in the 35th minute, U.S. forward Margaret Purce got away on the break but completely mis-hit her shot

Kyah Simon spurned a gilt-edged chance three minutes later, blasting a close-range effort over the bar after a terrific run and cut-back from Caitlin Foord.

Late in the half, the ever-exciting Mary Fowler forced a big save from Murphy with a fierce shot.

Hayley Raso replaced Simon at halftime, while Charlotte Grant came on for Nash, with Ellie Carpenter shifting to centre-back.

Minutes after the break, Purce cleverly outbodied Nevin then cut the ball back to Lavelle, who finished coolly at the near post.

Kerr started the game despite a limited build-up, while Matildas players also wore black armbands after the striker’s uncle passed away during the week.

She was replaced by Kyra Cooney-Cross in the 63rd minute.

Shortly after, Horan went down under contact from Carpenter then buried the penalty.

It was the 35th goal Australia have conceded in 15 games under Gustavsson.

Fowler tried her luck from long-range in the 69th minute but Murphy again stood tall to deny the 18-year-old and seal her clean sheet.

Microsoft offers lackluster guidance, says new business growth slowed in December
Asda shake-up risks job cuts and lower pay for 4,000 night workers
Nissan is exploring a mid-size electric pickup truck similar to the Frontier
Biden touts job growth and slowing inflation rates in speech on economy
Sunak’s integrity is taking a hit as he prolongs the pain over Zahawi – who will have to go