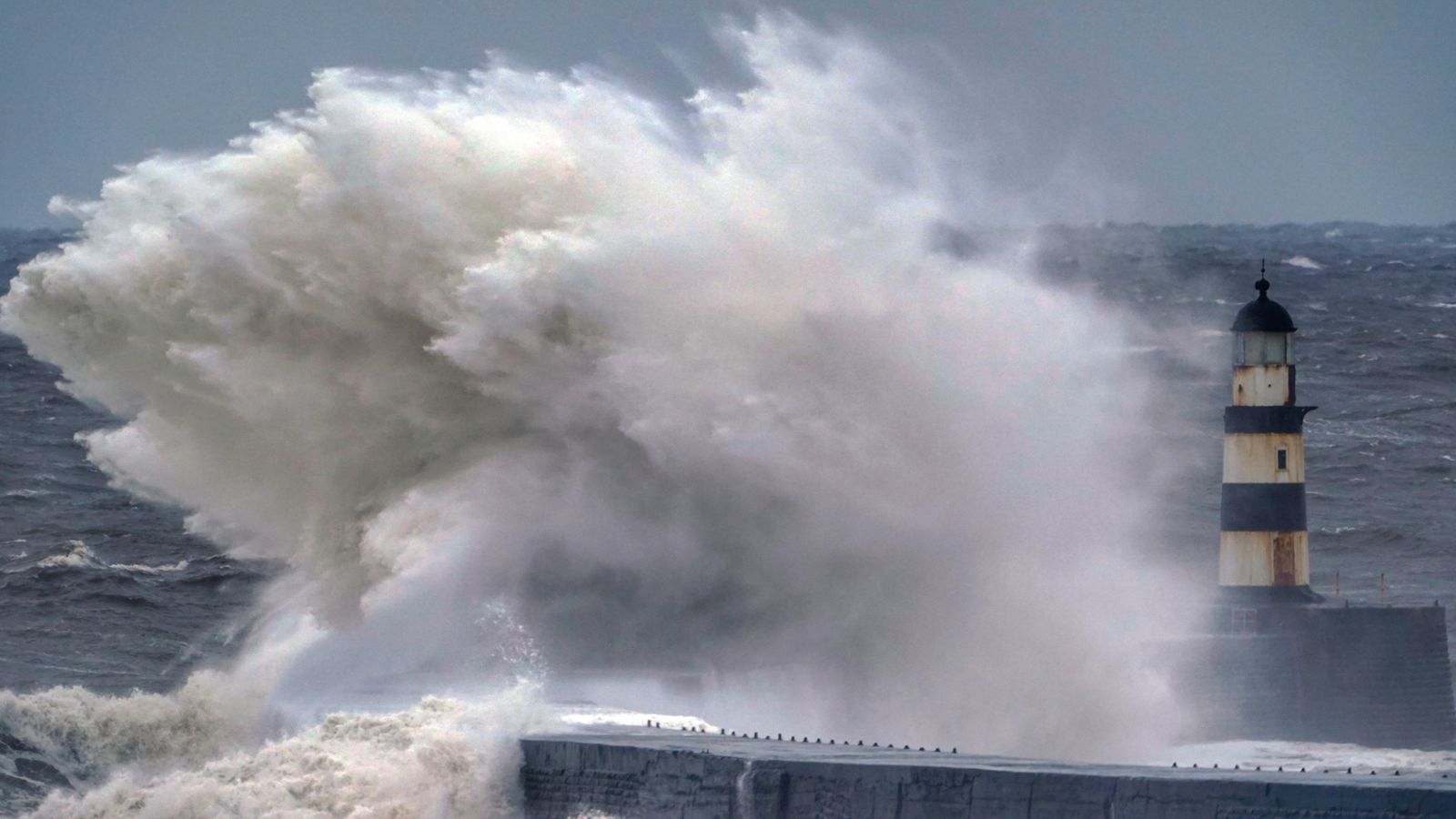 A rare red “danger to life” weather warning has been issued by the Met Office for Storm Arwen – with winds so strong they could destroy homes and buildings, disrupt travel and bring down power lines and trees, it says.

The Met Office issued its highest alert, warning that gusts in excess of 80mph are expected to hit the eastern shores of Scotland and northern England from 3pm on Friday.

The warning, which stretches along the east coast from Newcastle upon Tyne to beyond Aberdeen, says flying debris could result in a “danger to life”.

The alert also warns people of the potential of “roads, bridges, and railway lines closed, with delays and cancellations to bus, train, ferry services and flights” and of “large waves and beach material being thrown on to coastal roads, sea fronts and homes”.

Yellow wind warnings are also in place for western parts of the UK, extending across the rest of the country into Saturday.

There are also yellow snow warnings in place for central parts of Scotland, with central and southern England also warned of the potential for snowfall on Saturday.

The warnings in Scotland say the snow will be more likely in the hills, while most areas covered by the warning in England will see spells of rain with a “small chance” of snow.

Warnings about cold weather are also in place in the northwest of England – with people encouraged to “look out for friends and family who may be vulnerable to the cold”.

What does a red warning mean

Arwen is the first named storm of the 2021/2022 season – which started in September.

In a statement, the Met Office said: “A rare red weather warning for wind has been added to existing amber and yellow wind warnings, with coastal areas on the east coast of Scotland and the northeast of England set to see the most disruptive winds, with gusts expected in excess of 80mph.

“The red warning will come into force from 3pm Friday and will last until 2am Saturday morning. The northerly wind is expected to cause damage to coastal areas, with exceptionally large waves possible in the northeast, resulting in likely significant damage and hazards from beach material being thrown near the coastline.

“People should stay away from the coast as waves and debris are a danger to life.”

Met Office meteorologist Daniel Rudman said: “Storm Arwen is associated with a deep low pressure system that will impact the northeast most significantly from Friday, but will also bring wider impacts to the UK with high winds, rain and snow probable, especially over higher ground.

“Coupled with the high winds, Storm Arwen is bringing the potential for rain, sleet and snow. The snow will likely be seen the most in the high ground in the north, but there’s a chance of some lower level impacts towards some southern areas, which is reflected with the yellow warnings for snow we have issued.”

Red weather warnings are pretty rare and reflect the high likelihood of high impact from the severe weather – they aren’t issued lightly, roughly once a year.

In February 2020, a red rain warning was issued for Wales associated with Storm Dennis.

Before that there was a red warning for wind and snow issued in March 2018 for southwest England and Wales when the Beast from the East hit.

The Met Office names storms on the back of their potential impact, with Storm Arwen declared as the result of the original amber wind warning.

Storm Arwen is expected to move across the North Sea and into Europe by Sunday.

Quick Charge Podcast: February 6, 2023
FTSE 100 reaches all-time high
China ‘spy’ balloon: What are they? And why could they play a key role in the future of aerial reconnaissance?
Jim Cramer’s Investing Club meeting Wednesday: Industrials, tech, energy
Diplomatic row between China and US escalates as Pentagon says second ‘spy balloon’ being tracked