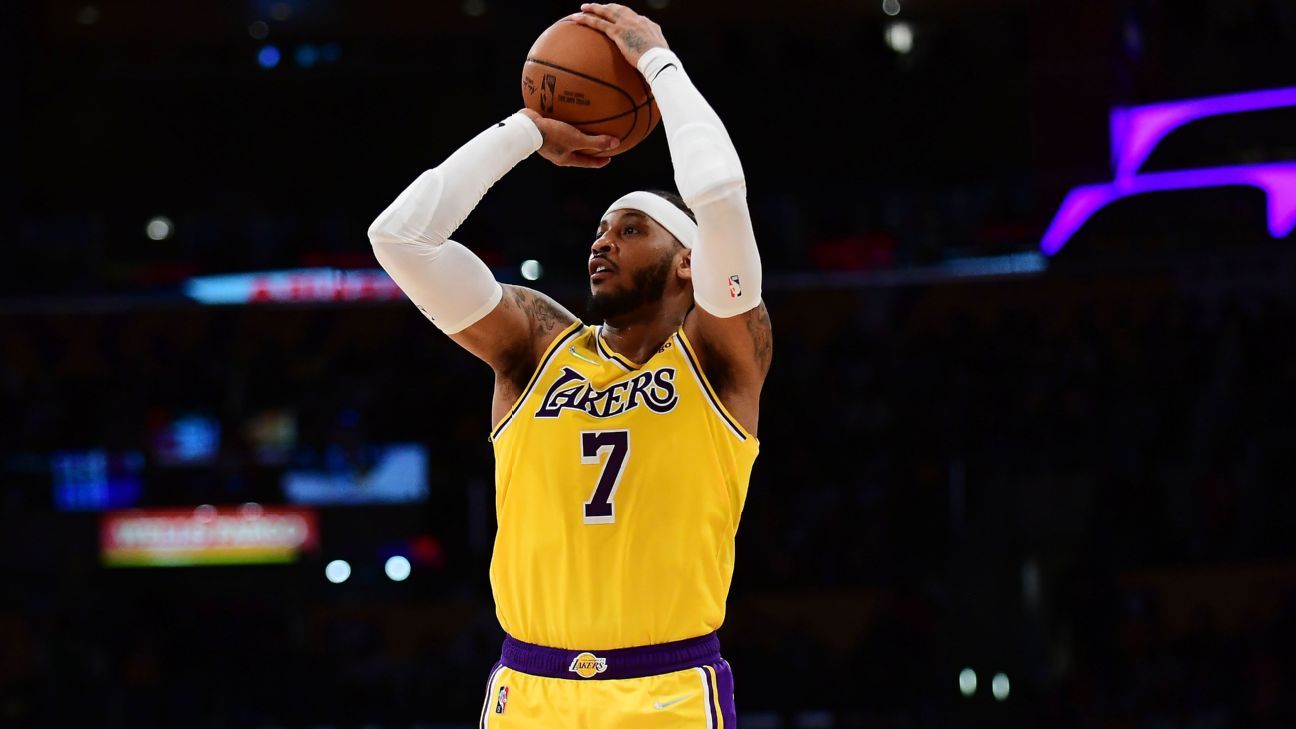 From his days as a rookie with the Denver Nuggets, to becoming a featured act in New York, to picking up monikers based on his apparel, to his preeminence in international competition, Carmelo Anthony‘s basketball reputation has morphed in his 19 years in the NBA.

Yet, as Anthony begins to carve out a role with his sixth franchise, the Los Angeles Lakers, some things have stayed the same.

“He’s been a pain on the ass on every one of those teams,” said San Antonio Spurs coach Gregg Popovich, who has tailored defensive schemes to try to thwart the No. 9 scorer in league history for nearly two decades now.

Throughout Anthony’s career, just as omnipresent as his megawatt smile, has been his branding as a certified bucket getter.

“A threat,” is how LeBron James described him. “He is a sniper. What we call it in our league — guys that don’t need much airspace to get it off because of his quick trigger.”

Anthony averaged 20-plus points in each of his first 14 seasons with the Nuggets and New York Knicks, winning the scoring title in 2012-13 with 28.7 points per game for New York.

He has scored 50 points four times and topped 40 points 40 times.

While Anthony was the undisputed No. 1 option on those Nuggets and Knicks teams, his role took on different forms in recent stops, refining his game to fit the rosters he found himself on as a complementary player, rather than as the top dog.

Here’s how he got from a supernova with the Nuggets to a high-level role player in L.A.

As the most decorated Olympian (three gold medals, one bronze) in U.S. men’s basketball history, Anthony’s time for Team USA will likely be looked back on as the best basketball of his career.

He started on the 2008 “Redeem Team” in Beijing but was at his peak during the London Games in 2012 as the second-leading scorer behind Kevin Durant, averaging 16.3 points on 53.5% from the field and 50% from 3 off the bench. While Durant averaged 19.5 points during the United States’ 8-0 run to gold, he did it in 26.1 minutes a game, with Anthony playing just 17.9 minutes per game as a reserve.

Anthony averaged more points than James, the No. 3 scorer in league history, and Kobe Bryant, the No. 4.

During that run, he had one of the most mind-boggling performances in international hoops history, scoring 37 points in just 14 minutes and 29 seconds of playing time against Nigeria. Anthony went 10-for-12 from 3 in that game, and Team USA won by 83 points.

“Once he started coming off the bench, it was seamless,” Jim Boeheim, Anthony’s college coach at Syracuse and an assistant on Team USA, told ESPN. “He had the game against Nigeria, he made about a hundred 3s. … It was crazy.”

For Boeheim, who coached Anthony as a teenager when he led the Orange to the 2003 NCAA title, and again years later as part of multiple Olympic teams, it was obvious that Anthony could fit his game to match whatever team he played for.

“The thing that’s interesting is when everybody didn’t want to pick him up three years ago or whatever it was, I told a few people, ‘Well, he’s come off the bench in the Olympics and played well. He does what he does. It’s not like he’s not going to be able to come off the bench and make shots because that’s what he does,'” Boeheim recalled. “So that’s what surprised me a little bit about the whole thing.”

The last half-decade has seen Anthony hop to a handful of teams, including a nearly year-long hiatus when he was out of the league.

The period of upheaval started with a trade to the Oklahoma City Thunder just before the start of the 2017-18 season.

“I loved Carmelo,” said Chicago Bulls coach Billy Donovan, who coached Anthony in OKC. “He was great to work with. I think that it was a really, really hard situation for all of us because the trade for him happened the day before training camp.”

Get access to exclusive original series, premium articles from our NBA insiders, the full 30 for 30 library and more. Sign up now to unlock everything ESPN+ has to offer.

Anthony went from averaging 18.8 shots per game with the Knicks to 15 per game for the Thunder. He started all 78 games he played in the regular season and all six he appeared in during Oklahoma City’s first-round loss to the Utah Jazz. He struggled in the postseason, averaging 11.8 points on 21.4% shooting from 3. This, of course, after setting the tone for his time in Oklahoma City with a news conference answer during training camp that some around the league viewed as him being unwilling to change.

“All this stuff about starting, coming off the bench, I’ve always found Carmelo to be a really, really good team guy,” Donovan said. “Really good in the locker room. I think guys really enjoy being around him. I think he’s an authentic, genuine, sincere, real guy. And everything we asked him to do, he tried to do to the best of his ability.”

The OKC experiment lasted just one season. Following a trade to the Atlanta Hawks, who waived him following a contract buyout, Anthony formed a new big three in Houston with James Harden and Chris Paul.

And that experiment lasted just 10 games — two of them in which Anthony appeared as a bench player for the first time in his NBA career — before he was told by the Rockets, in essence, to go home. He was eventually traded to the Chicago Bulls and waived without playing a game.

Then came the year-plus period when Anthony was without a team before the Portland Trail Blazers, scuffling along at the start of the 2019-20 season, signed him, with their stars, guards Damian Lillard and CJ McCollum, endorsing the move.

“It was close to almost nobody taking a chance,” Boeheim said. “Just think if Portland hadn’t done that, I don’t think he plays. And then everybody has a whole different outlook on him.”

Anthony started 58 games in his first season with the Blazers and proved he still could perform in the clutch, hitting key late-game jumpers in the seeding round in the Orlando, Florida, bubble.

“He was great,” Boeheim continued. “I mean, he’d go eight minutes without taking a shot and on that team, you might not get a shot. And then he’d make two. And to their credit, they would go to him down the stretch, he would end up making a 3 at the end of the game to win the game. It was crazy, really.”

Anthony played one more season in Portland and came off the bench in 66 of 69 games. In the playoffs, even though Portland lost to the Denver Nuggets in the first round in six games, Anthony fared better as a reserve than he had as a postseason starter with OKC, averaging 12.3 points in 23.9 minutes while shooting 37.8% from 3.

While the Lakers’ season has been up and down, Anthony has been a bright spot.

Through his first 18 games, all but three of which he came off the bench, he’s shooting a career-best 46.1% from 3. Anthony has been even better at home, where the L.A. crowd has quickly fallen in love with him, shooting 53.2% from 3 — best in the NBA for any player playing in home games with a minimum of 30 3-point attempts.

“He knows who he is as a player and he finds places to be where he can be helpful, and this is a great example of that,” said Popovich of Anthony’s success in L.A. “He’s done it again. He takes care of himself. He’s a pro. And he makes every team better. So, I’m just happy for him.”

Anthony is averaging 15.2 points on just 11.2 shots per game and is often being asked to fill the wings and get open. He has made 47 catch-and-shoot 3s this season, the best in the league heading into Monday’s game, edging Milwaukee’s Grayson Allen (46), according to Second Spectrum tracking.

“He’s in a great rhythm,” James said. “He’s just taking his shots and knocking them down.”

While Anthony hasn’t gone so far as to chastise the Rockets for alienating him and the 28 teams other than the Blazers for not signing him, he has relished in his time with the Lakers.

Monday through Friday, host Pablo Torre brings you an inside look at the most interesting stories at ESPN, as told by the top reporters and insiders on the planet. Listen

“As far as what I can do on the court, I don’t think that’s going to change,” Anthony said. “I don’t require a lot. I pick my spots, I get to open spots, I shoot when I’m open, my teammates look for me. Now, I’m not the every possession guy coming down the court when the offense is playing through me, so I’m able to see the game differently, from a different perspective.”

Anthony has already garnered some Sixth Man of the Year buzz and has been key to the Lakers’ success. L.A. is 7-2 this season when Anthony scores 15 points or more, and he is a huge difference-maker for the offense. The Lakers average 108.6 points per 100 possessions with Anthony on the court and just 97.0 points per 100 possessions without him. That differential in offensive rating, a plus-11.6, is tied with James for the largest on the team.

“I don’t think that he would say that he’s looking at it as a role player,” Boeheim said. “I think when he goes in, he’s looking at it as, ‘I’m going to put points up there.’ You average 14-15 a game in what, 22-23 minutes? That’s almost star-quality play. So I think when you go in, whoever you are, you got to think, ‘I’m a star.’ And he believes in himself, he always has, and there’s reason for it. He’s good. I mean, he’s proven.

“What’s he, the f—ing ninth all-time scorer in the NBA? That’s pretty good.”