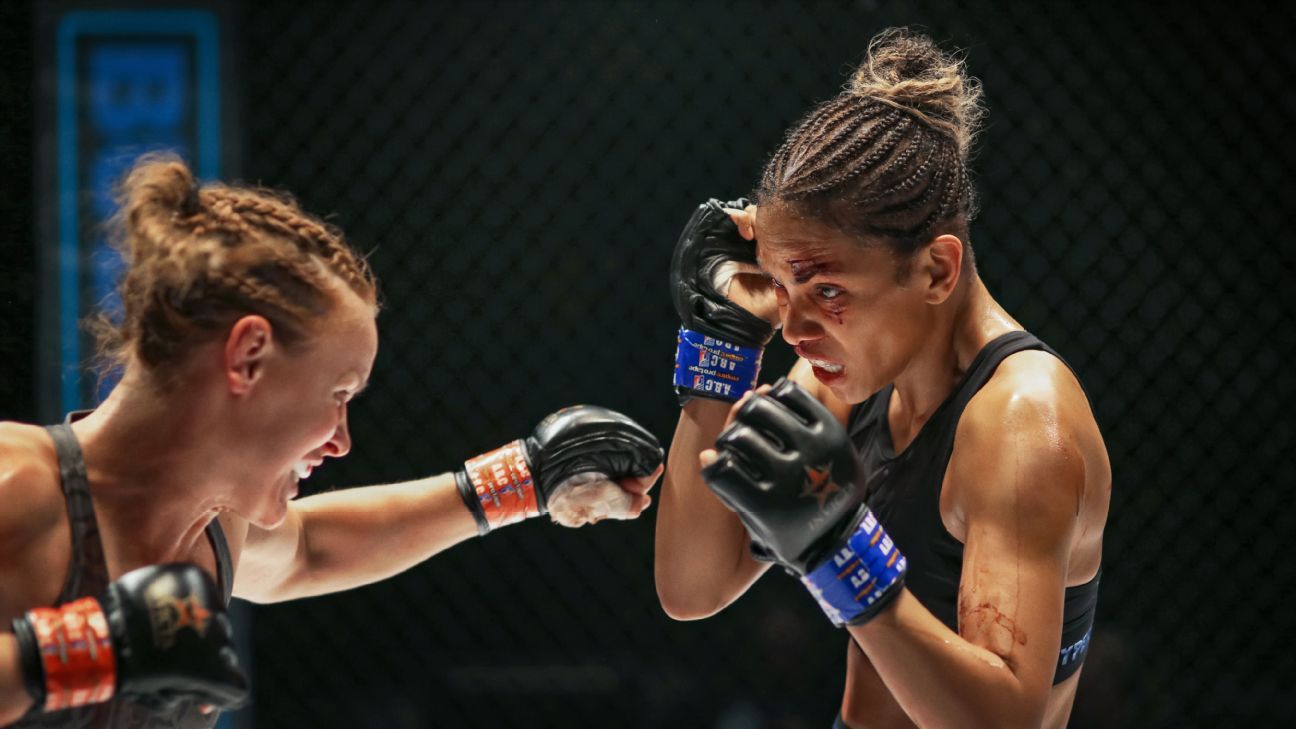 Valentina Shevchenko was inside of a boxing gym in Newark, New Jersey, preparing to go on a run. It was the fall of 2019, and the next day Shevchenko would start filming an MMA movie alongside A-list star Halle Berry.

To prepare for the shoot, Shevchenko was cutting weight, and the run was to sweat out some extra pounds. The UFC women’s flyweight champion wanted to appear at her physical best for the fight scenes. She put on her sauna suit and was about to start the run when Berry unexpectedly entered the gym.

The Academy Award-winning actress had the same idea.

“I started to do my workout and then I saw Halle,” Shevchenko told ESPN with a laugh. “She was walking into the gym, the same — in the sauna suit.”

The weight cut, Berry said, was one of the things she thought necessary to do in order to gain a better understanding of MMA and the sport’s athletes.

“It was hard for me, because I had never done that before,” Berry said. “But that was a really big part of me playing this character. I wanted to experience every aspect of being a fighter that I absolutely could. I wanted to understand what it felt like. And being the director of the story, I felt like I needed to understand it.”

Berry, 55, got a more realistic look into being a fighter than even she intended while making “Bruised.” On the second day of filming, she said, she broke her rib during one of the fight sequences with Shevchenko. Berry said she had previously broken her ribs while filming “John Wick: Chapter 3,” and this was the same sensation.

“I don’t exactly know the moment the kick happened or the knee happened or whatever happened in our fighting,” Berry said. “I just knew at one point I stood up and I had that feeling and I couldn’t breathe.”

Berry said she confided in Shevchenko that something was wrong, but Shevchenko said it would be “fine” and “this happens to me all the time.”

Berry soldiered on despite the injury, because she knew if she told everyone, filming would have been shut down. She felt she might have lost her funding, too, and even if it was just a brief delay, there was a chance Shevchenko would not be available when things got started again. After all, Shevchenko was, and still is, a defending UFC champ.

“It shows the power, her inner power,” Shevchenko said. “And it’s amazing. It was like a fresh breeze to the set. It’s like the energy that ran through. And at this moment, everyone knew we were going to do it no matter what, until the end.”

Berry said she felt like she had no choice in the matter.

“I knew that I had to do what all fighters do,” she said. “As Valentina told me, when you’re in the ring and you get injured, you don’t quit. You keep going. You have no choice, but you fight through it. So just in that moment I thought, no way I’m getting shut down. I’m just going to have to fight through this.”

Berry said she grew up watching boxing and idolizing the likes of Muhammad Ali, Joe Frazier, George Foreman and “Sugar” Ray Leonard. When she saw women in MMA, her interest was piqued in that sport. Berry cited Ronda Rousey, Gina Carano and Miesha Tate as people she gravitated to — and then the sport itself. “Bruised” was initially tied to another director with Blake Lively as the star. But in 2018, Berry took over as director and knew she wanted to be Jackie Justice.

“It’s just sort of that lucky moment when a project collided with me and it was exactly what I needed, because it was where I was personally,” Berry said. “That was this project.

“It was grueling and I pushed myself harder than I ever thought I could go. And especially at my age, I was really proud of it. Because what it says is that we can do whatever we set our minds to doing. I realized when making this movie, so much of fighting is a mental game. You can be in tip-top shape, but it’s all about the mental game and emotionally how you’re feeling. And that determines what you can and cannot do.”

Berry said she had been a fan of Shevchenko for years prior to her selecting the Kyrgyzstan native to be in the movie. Berry said she called the UFC and asked for Shevchenko specifically, though she was unsure Shevchenko wanted to be “slumming it” in Hollywood while being UFC champion.

Berry thought that if she were an MMA fighter, she would probably fight at 125 pounds like Shevchenko, so who better to cast than “the queen” of that weight class? Now, having bonded over training together and hard fight scenes, Berry and Shevchenko have become close friends.

“I want to be at every one of her fights,” Berry said. “Normally, I can watch a fight and I’m for all the fighters. Someone’s gotta win and someone has got to lose. But when Valentina is gonna fight, from now until the end of her career — when you love someone and you really care about someone so much, the last thing I want to do is see her hurt. I never want to see her lose. It’ll always be one of those situations that I want to see, but I don’t want to see. I just love her too much.”

Shevchenko, one of the top pound-for-pound fighters in the world, said she was floored by Berry’s ability to push through each day to make the fight scenes look as realistic as possible. Shevchenko said the wake-up calls during those days were at 5 a.m. and that they did not finish filming until almost midnight. She compared the physical grind to a training camp to prep for a UFC title defense. Every take, Shevchenko said, had to be at full strength so it would look good on film.

“It’s every single take [and] you have to perform the best you can,” Shevchenko said. “And definitely everyone is human. They’re tired. We were tired by the end of the day. And injuries happen.”

Berry and Shevchenko have been busy over the past few weeks doing publicity for “Bruised.” Shevchenko said she left her home in Las Vegas for Los Angeles one day after defending her title with a TKO win over Lauren Murphy on Sept. 25 at UFC 266 to do a photo shoot for Women’s Health.

The two women said they are very pleased with how the movie, and the fight scenes in it, turned out. And they aren’t the only ones, Berry said. On set, Berry spoke with well-known MMA referee Keith Peterson, who played the official in the cage during the fight between Jackie Justice and “Lady Killer.”

“[Peterson] said, ‘I thought for a minute I was watching a real Valentina fight,'” Berry said. “That’s when I knew that, oh my god, all of this training and weight cutting and all this muscle building ­– everything was all worth it. For him to say that, I knew I had achieved at least the goal I set out to achieve: to look like a real fighter.”