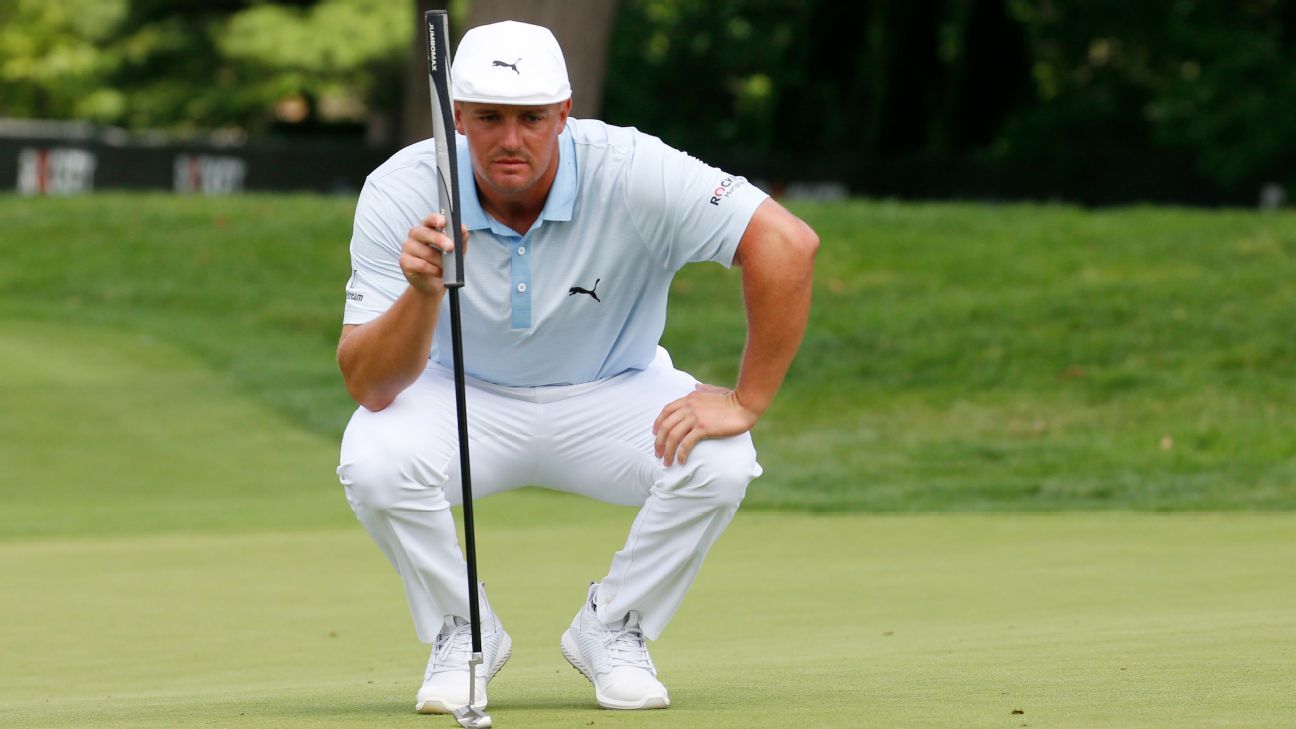 It would be tough to top the kind of drama that Bryson DeChambeau found himself part of in 2021. He won just once on the PGA Tour, but the man who transformed his body in less than two years to become the tour’s longest driver certainly was a major topic of discussion throughout an eventful golf season — even when he was not contending.

Winner of the 2020 U.S. Open, DeChambeau added the Arnold Palmer Invitational in March for his eighth PGA Tour victory.

And yet despite some strong play at times, he did not win again, posting a total of six top-10 finishes in 20 worldwide events. He is now ranked seventh in the world.

DeChambeau has not played an official event since the Tour Championship in early September. He then played the Ryder Cup followed by the Professional Long Drivers Association event.

For all we know, he’s packed on more power and muscle after a year that saw him become the subject of controversy and a monthslong feud with Brooks Koepka that leads to Friday’s festivities in Las Vegas.

Now he is set to join nemesis Koepka in a made-for-TV 12-hole grudge encounter called “The Match.” It is the fifth such version of the series that began with Tiger Woods and Phil Mickelson in 2018. It will be DeChambeau’s second appearance.

It is fair to wonder whether the two have really settled their differences to the point that now the archenemies are actually good enough with each other to ham it up for a few hours on national TV for a payday.

Does that make their monthslong “feud” seem more contrived now that they seemingly had a truce at the Ryder Cup and are taking part in this Thanksgiving weekend outing? Or does bad blood remain?

We will get some of those answers during the competition, but for now it seems prudent to look back on the good and bad of an incredibly busy year for DeChambeau.

DeChambeau made it his mission to hit a tee shot across a lake on the par-5 sixth hole at the Bay Hill Club, site of the Arnold Palmer Invitational.

By Saturday, the circumstances presented themselves, and DeChambeau hit a 370-yard tee shot on the 555-yard hole that ended 50 yards from the green. He wedged on, two-putted for birdie, and was the talk of the tournament.

“I felt like a kid again. It was exciting,” he said.

DeChambeau played the final round with 54-hole leader Lee Westwood and did the same thing on Sunday. He ended up prevailing in a close duel with the Englishman for his eighth PGA Tour victory. His exploits dominated the discussion, but his victory was impressive, too, on a demanding course with Westwood sticking with DeChambeau until the final hole.

Perhaps most amazing was it was DeChambeau’s only victory of 2021, despite numerous chances.

DeChambeau did not disappoint at the Ryder Cup, where he drove the first green during his Sunday singles match, a 417-yard bomb that set up a lengthy eagle putt — which he rolled in. It was great theater and set the tone for a triumphant day as the U.S. rolled to an easy victory over Europe.

It was also part of a feel-good story for DeChambeau, who never let the Koepka chatter become an issue and went 2-0-1 in the competition after poor showings at both the 2018 Ryder Cup and 2019 Presidents Cup.

Not too many felt it was a good idea for DeChambeau to compete in the Professional Long Drivers Association World Championships. The event was scheduled to begin the Tuesday after the Ryder Cup. Training yourself to hit long drives is a different animal than preparing to play tournament golf, especially Ryder Cup golf.

But DeChambeau was undeterred and came away earning a good bit of respect. Less than two years after embarking on a profound weight-gaining and strength-building program, DeChambeau was more than competitive at the event. With 80 players in the competition, DeChambeau advanced to the final day, where he finished seventh.

“I’m so proud of Bryson,” said Kyle Berkshire, who won the event. “He came out here and put himself in a position where not a lot of people thought he would do well. He held his own against the absolute best and made the final eight in his first try after coming from the Ryder Cup. That is phenomenal and I’m not just saying in the context of golf — that is one of the greatest sporting achievements I’ve seen.”

DeChambeau’s longest recorded drive on the final day was 408 yards.

This took on all sorts of forms over the past six months, some of it going beyond silly. But unless you take issue with DeChambeau pointing out spectators who harassed him during competition, he handled this situation quite well.

Remember, DeChambeau really did nothing to reignite the tension between the two golfers. He innocently walked along a path from the scoring area to the locker room following the second round of the PGA Championship at Kiawah Island, and was apparently bemoaning his fate to those around him. It happened to be in earshot of Koepka, who was conducting a taped interview with Golf Channel. This chatter apparently distracted Koepka, who stopped, rolled his eyes, uttered his disbelief — and asked to start the interview again.

That interview later got leaked, then blew up. And for a good while, Koepka had no problem letting it fester, taking social media jabs and enjoying the fallout. The “Let’s Go Brooksy” chants that became common at tournaments and that were meant to annoy DeChambeau did get under the golfer’s skin but were largely lame.

After innocently being asked about his first-round 71 at The Open, DeChambeau unleashed on his equipment, saying his driver “sucks.”

“It’s not a good face for me and we’re still trying to figure out how to make it good on the mishits. I’m living on the razor’s edge like I’ve told people for a long time,” he said. “When I did get it outside of the fairway, like in the first cut and whatnot, I catch jumpers out of there and I couldn’t control my wedges.”

That did not go over very well with his equipment maker and endorser, Cobra. The company’s tour operations manager, Ben Shoman — who had caddied for DeChambeau two weeks prior at the Rocket Mortgage Classic — publicly pushed back, saying to Golfweek: “He’s never really been happy, ever. Like, it’s very rare where he’s happy.” And: “It’s just really, really painful when he says something that stupid.”

To DeChambeau’s credit, a day later he met with a group of reporters, apologized and explained his frustrations.

DeChambeau was in position to defend his U.S. Open title. With nine holes to go, he led at Torrey Pines. And then he unraveled, shooting a back-nine 44 that led to a final-round 77. He tumbled down the leaderboard. Bogeys at the 11th and 12th holes dropped him 3 shots back of the lead. On the 13th hole, his foot slipped during his tee shot, leading to a double-bogey 7 that effectively dropped him out of contention.

He blamed his woes on bad luck.

“I had to be a little lucky, and I was for the first 3½ days and just didn’t get luck on the last nine,” he explained. “But it plays a huge factor in major championship golf. It’s probably over 50% in most scenarios. There are times when I hit it in fairways and hit it into a divot. It’s just part of it.”

DeChambeau was set to leave for Tokyo and the Olympics when he failed a COVID-19 test as part of the pre-travel protocols. He returned a week after the Olympics at the WGC-FedEx St. Jude Invitational, where despite having lost 10 pounds and feeling some fatigue, he told reporters he did not regret his decision to not get vaccinated against the coronavirus — and added some erroneous information.

“The vaccine doesn’t necessarily prevent it from happening,” DeChambeau said. “I’m young enough, I’d rather give it [the vaccine] to people who need it. I don’t need it. I’m a healthy, young individual that will continue to work on my health.

“I don’t think taking the vaccine away from someone who needs it is a good thing. My dad is a perfect example. He got it [the vaccine] early on because he’s a diabetic. People like that need to get it. My mom got it. I don’t want to take away that ability.

“Now as time goes on, if it [the vaccine] is mainstream, really, really mainstream, then yeah.”

In August — as is the case today — there was no vaccine shortage in the United States. Also, at the time, the CDC was reporting that more than 95% of hospitalizations and deaths were among unvaccinated people.

The backlash was quite severe, especially on social media. In the aftermath DeChambeau decided not to speak to the print media, something he maintained throughout the FedEx Cup playoffs. It only ceased at the Ryder Cup.

DeChambeau’s defense of his Rocket Mortgage title did not go well. This came between the final-nine blowup at the U.S. Open, prior to the driver issues at The Open, and meant he was the subject of more criticism.

The fact that he missed the cut was the least of his problems. On the eve of the tournament, DeChambeau and longtime caddie Tim Tucker split. It was odd timing, given that the caddie was on site, worked the pro-am, but then didn’t work the tournament. DeChambeau suggested it was a mutual parting, but it seemed that Tucker might have simply decided he’d had enough.

Both took the high road in the aftermath, but DeChambeau didn’t speak to the media after either the first or second round — despite being sponsored by Rocket Mortgage — setting himself up for criticism.

Buffy star shares what most scares her and how she moved on from ‘toxic’ ’90s set
S Club 7 singer reveals she was homeless over Christmas
Man dies after being crushed by pop-up telescopic urinal in London’s West End
Kanye West a ‘danger to my children’, David Baddiel says
British teenage extremist whose videos were linked to two mass murders in US jailed