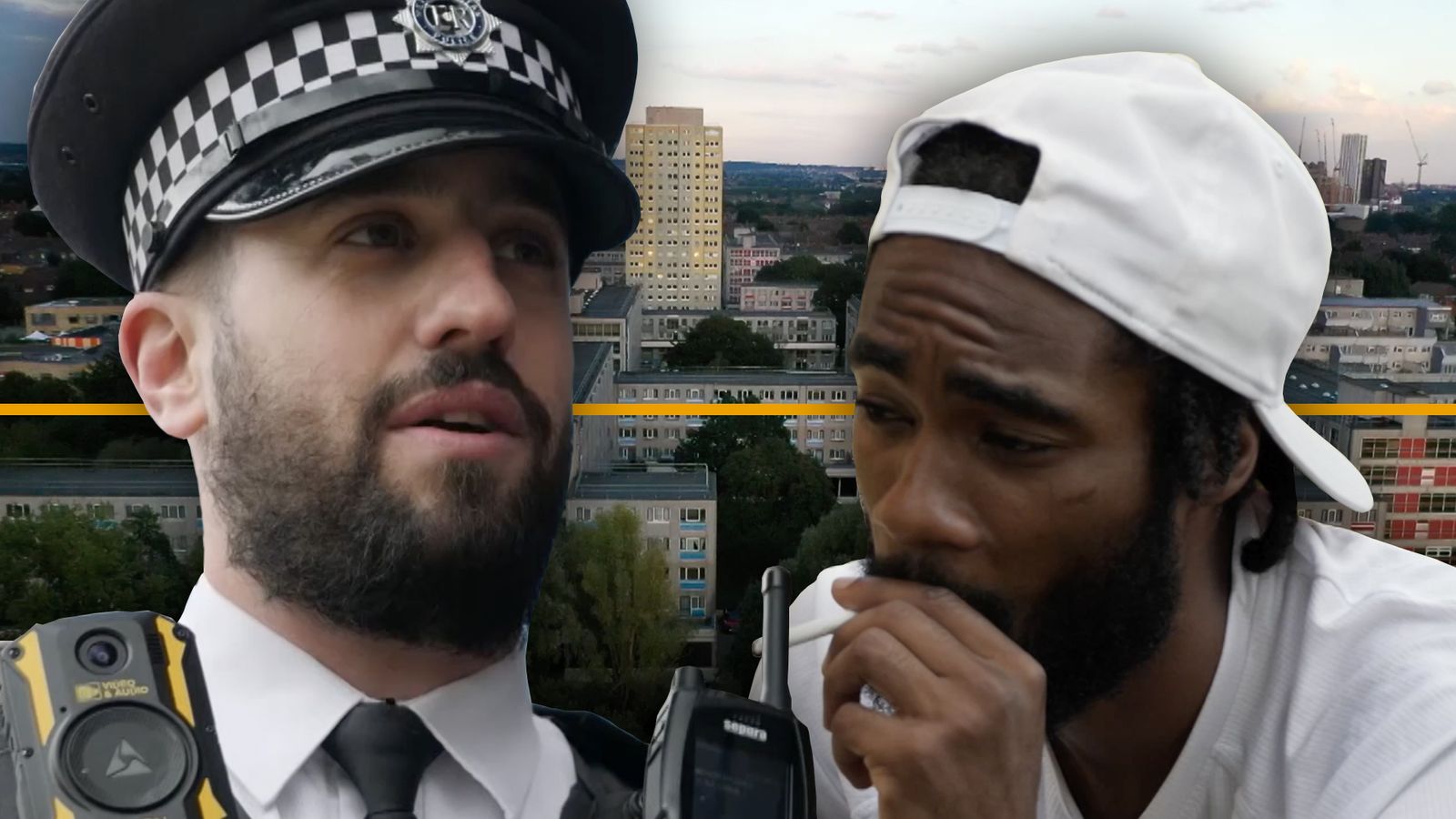 London is on track for the worst year of teenage murders on record.

“The people who are in the gangs don’t seem to have any care for life in the way the general public do. They just don’t care,” says PC Jim Hare.

He is part of a Metropolitan Police unit specifically tasked with targeting gang violence in north London.

Twenty-seven teenagers have lost their lives so far in the capital in 2021. The youngest victim was a 14-year-old boy who was savagely killed with a sword. For now, at least, the grim record stands at 29 murders in 2008.

The main reason for this year’s deaths is gang warfare in some areas – hotspots. There are about 200 identified gangs in London. Each known gang and gang member is ranked by the Metropolitan Police by how violent they are.

This list, of course, is kept within the force, but I’m told that of the 20 most dangerous gangs in London, about seven are based in and around Tottenham. This means a handful of the most feared and violent gangs in the whole of the capital live on each other’s doorsteps.

This is the reason we chose to spend six months there, investigating why there were so many gang-related murders this year.

What we found was a tale of tension and division between two very different communities – the people who live there, and the Metropolitan Police.

‘I’m not a gang member, I’m a family member’

Moses showed me some of his tattoos. He pointed at one on his fist which reads ‘FMD’. “That means Farm Mandem, that’s my crew. Cause I’m from Broadwater Farm!”

Moses is very well known on ‘the Farm’. He has lived his whole life there and is equally respected and feared by the community.

I had spent several weeks trying to meet him. He pointed to another tattoo on his arm.

“This one says RIP Mark Duggan man,” he told me. Mark Duggan was shot and killed by a police officer during an operation in Tottenham 10 years ago.

“Mark was my good friend, bro. I’ve got so many memories of this guy. Like many memories, we went and met girls together. We grew up together.

“And then we’re portrayed as criminals, as gang members, as this, as that. But have any of those people that portray us as that ever spoke to us and asked us how we feel as a person?”

So what actually is a gang?

“A gang is a group of street-based young people who engage in a range of criminal activity and violence,” according to the Metropolitan Police’s website.

It continues: “They may also have any or all of the following features: identify with or lay claim over territory, have some form of identifying structure feature, or are in conflict with other, similar gangs.”

It’s the last part of that sentence that really rings true. The conflict between the sheer number of gangs goes a long way to explaining why there have been so many teenage murders in the capital.

In Tottenham and Haringey, for example, there are several high-profile gangs which all border each other.

Corey Newton was a promising young footballer who narrowly missed out on his dream of professional sport. He fell into what he called “street life” as a teenager.

The evidence of his lifestyle is plain to see. He has a large scar under his left eye.

“Oh, that’s nothing,” he replied. “Don’t worry about it.” Corey wants to move on but I won’t let him.

I persisted: “Come on, what happened? Is that a stab wound?”

“Nah, man,” he said. “Someone hit me in the face with a huge padlock because they wanted my watch.”

He held up a gold Rolex. “But as you can see I still got it,” he told me with a proud grin.

Last year three of his best friends were stabbed to death in separate incidents. Now 26, he told me he’s trying to leave that world.

“Is it dangerous for you to walk about freely in Tottenham?” I asked.

“Let’s just put it like this,” he says, “I could be walking around here late at night, and if certain gang members are out to do stuff to each other on that particular day, and they happen to bump into me, they’re not particularly asking no questions because the younger generation today, they don’t give a f*** about who you are.

“If their bredren has died and they’re coming back to get revenge, it doesn’t matter who the f**k you are, you’re here, innit. That’s it. You’re gonna get it.”

Corey insisted he wanted to leave his past behind him.

As we said our goodbyes, he said: “Thank you for letting me tell my story. No one usually cares about us.”

‘A lot of things happen here but no one will ever call us about it, because calling the police is not the thing to do’

PC Jack Wilson told me this as we drove into the Broadwater Farm estate in Tottenham. “This place is known for tensions between the residents and the police,” he added.

There are many reasons for this tension.

The relationship between the Met and the community in Tottenham had been simmering for years, but it really broke down in the 1980s.

In 1985 Cynthia Jarrett, a 49-year-old black woman, died from heart failure after police entered her flat in the Broadwater Farm estate.

This led to a mass riot the following day in which PC Keith Blakelock, a riot officer working there, died after being stabbed 40 times by at least two knives and a machete.

Twenty-six years later, in 2011, a local man was shot and killed by a police officer during an operation. His name was Mark Duggan.

“The two things that everyone talks about around here are PC Keith Blakelock and Mark Duggan,” Inspector Niall O’Neill told me.

He runs the Met’s Violence Suppression Unit (VSU) in Haringey, and is known as “the Guv”. The unit was created in 2020 to specifically target violent and gang-related crime.

“Both incidents have affected policing here ever since. I know the public’s trust here isn’t what we’d like it to be, but we’re working really hard at it,” he added.

I spent several weeks with the unit during a troubled summer of violence. Their job is a difficult one. They are tasked with suppressing violence in an area known for it.

Not only that, but Insp O’Neill tasked his officers with connecting more with the community. Ease those tensions, bridge gaps, form relationships. But that is easier said than done.

While on patrol with the team I asked: “How do the wider community greet you guys when you go into their area?”

“Most of the time, terribly,” PC Hare answered.

“I personally think there’s a huge split in this area between police and the local community, which I don’t know if policing can do more to improve that. As a unit we really try to focus on it because that’s one of the keys to getting people to help us.

“I’ll be honest, in my short time in the police, I don’t feel like I’ve met any racist police officers. The way we work is completely against that.”

PC Dan Freeman replied: “Getting a knife out of someone’s pocket or out of a bag is why we do this. There’s no better feeling that. They’re only carrying that knife for one reason from my point of view.

“I’m not going to lie, right now, it’s the worst time to be a police officer, certainly in my career. The hostility towards police is the worst it ever has been.

“I’ve had my doubts along the way, of course, but we’re here to help people. That’s our job. We’re here to make people safe. And I love that idea.”

‘If you’re a white person then the Met are a police service. If you’re black, then they’re a police force’

Ken Hinds is a community activist in Tottenham, who was there for the 1985 and 2011 riots.

I asked him how the community would respond if police came to the area asking for information on a crime.

“Who the f**k are the police?” was his response.

“If you’re a white person then the Met are a police service. If you’re black, then they’re a police force”

The previous night, I was with the police as they drove into the Broadwater Farm estate for a routine patrol. “This is a completely different place at night. It has a very different atmosphere,” PC Freeman said as the team stepped out the van.

Seconds later, a group of young men saw the unit and run away. “We have runners!” PC Wilson shouted into his police radio.

The group of young men lost them, but two other members of the police unit ran around to the opposite side of the estate.

PC Freeman tackled one of the young men to the ground. “Hands behind your back now!”

He handcuffed him and told him he’ll be searched for weapons and drugs.

Seconds later, two young men gathered around and started watching. Then a third. Then a couple of older members came out to watch. I asked: “Why do they surround you guys?”

Insp O’Neill said: “They’re trying to intimidate us, they think they’re going to stop us doing our job.”

PC Hare continued: ‘You’ve got to be careful around here as the community will just come out from nowhere, asking what you’re doing.”

The community made their feelings clear. The police were not welcome there.

I met local resident, a woman called Paulette Campbell. Her son Marcel, 30, was murdered in a stabbing in 2018.

But Paulette was also at the Broadwater Farm riot in 1985. She told me: “So they locked up all of us black people in there, don’t you think that was gonna build a rage?

Paulette was one of the 359 people arrested and questioned over the murder.

She said: “I was stigmatised by the police when they kicked in my door, arrested me and took me into the station for three days and terrorised me for the death of a police officer I don’t know about, all because I lived on Broadwater Farm.”

I asked Paulette if she would ever forgive the police. “I don’t think so, no,” she replied.

During my six months in Tottenham, I asked everyone I came across for a solution. Here’s what some of them said.

Insp O’Neill: “I think it’s a long-term problem. It’s never going to be fixed overnight. I think we just always have to keep working at it. How do we make that better? It’s with the community’s help.”

Corey Newton: “There will be a solution but I’m not the person to tell you what that is. I might not even live to see the solution.”

Moses, the Broadwater Farm resident: “There’s no end to this because the police don’t care, and the community don’t.”

PC Hare: “There will be a solution to this problem, but it’s going to take for both sides to engage and sort out together.”

Teenage deaths in London in 2021

• On Thursday a 14-year-old boy, as yet unnamed, was stabbed to death in Croydon