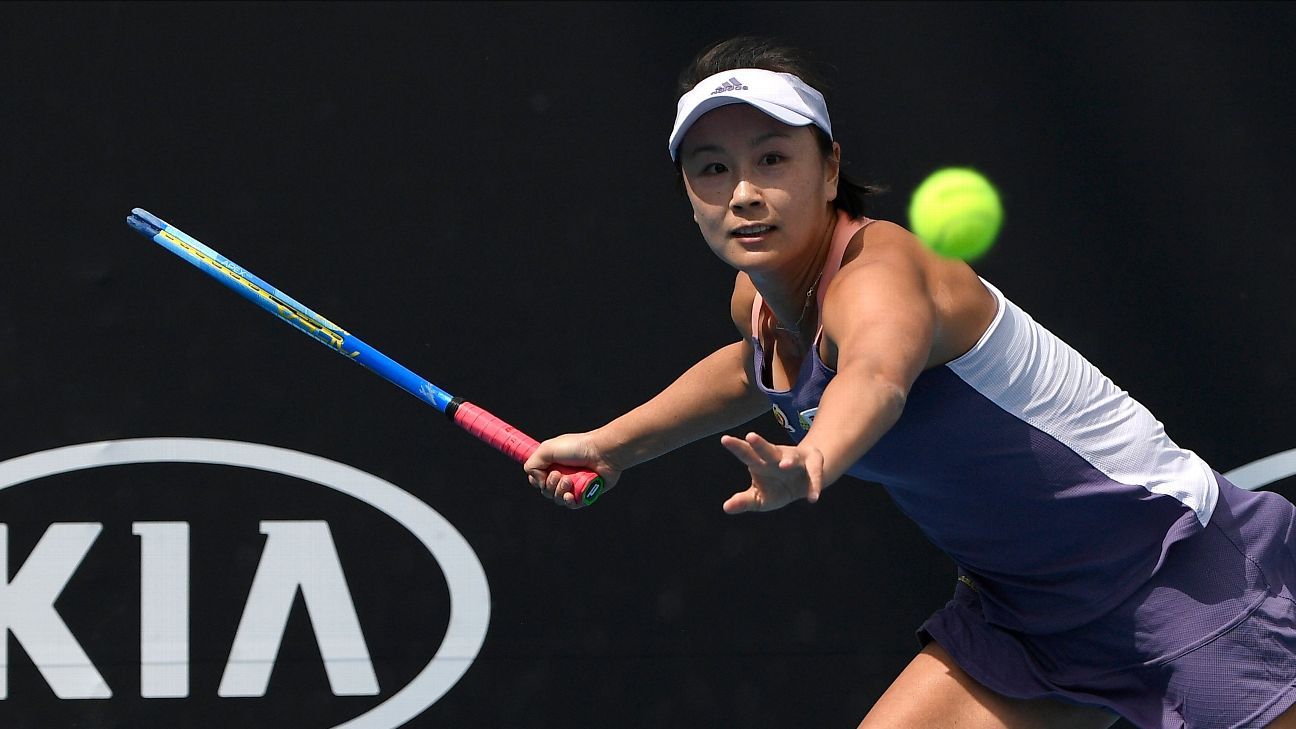 The post was removed within 20 minutes from her verified account on Weibo, a leading Chinese social media platform, and Peng hasn’t posted on social media or been seen in public since.

Now, her safety and whereabouts have become a growing concern among her peers, fans and those at the WTA. Where is Peng, and what exactly happened? While many questions remain, here’s what we know — and don’t know — so far.

Peng is a 35-year-old Chinese tennis player and former world doubles No. 1. She has won two major doubles titles — at Wimbledon in 2013 and the French Open in 2014 — and reached the semifinals at the 2014 US Open in singles. She has earned 25 titles on tour and last played at the Qatar Open in February 2020.

What exactly did her social media post say and why was it taken down?

In the 1,500-character post, Peng gave a detailed account of her encounters with Zhang, now 75, which began a decade ago. Peng claims, in her post, she had an on-again, off-again affair with Zhang, who was married, starting before he rose up the party ranks and became vice premier.

About three years ago, after Zhang retired from his role, he invited her over to his house to play tennis with him and his wife. She said he then sexually assaulted her while his wife stood outside guarding the door.

Infidelity is strictly prohibited by the Communist Party and results in expulsion from the organization. Peng said he was concerned she might record their encounters and she therefore has no evidence to support her allegations. Despite that, she wanted to publicly voice what happened to her.

“I know that for someone of your eminence, Vice Premier Zhang Gaoli, you’ve said that you’re not afraid,” Peng wrote, according to The New York Times. “But even if it’s just me, like an egg hitting a rock, or a moth to the flame, courting self-destruction, I’ll tell the truth about you.”

Weibo is similar in format to Twitter and is heavily censored by the government. In addition to the deletion of the post, searches for her name and “tennis” were also blocked on the government-run internet.

As public allegations against high-ranking Chinese government officials are unheard of, and due to Peng’s celebrity status, screenshots of the post had already been saved and shared before it was deleted. It quickly went viral, and Peng’s accusations gained media coverage around the globe.

How did the WTA respond?

On Sunday, the organization released a statement from Steve Simon, the chairman and CEO, asking for a “full, fair and transparent investigation” into Peng’s allegations.

“Peng Shuai, and all women, deserve to be heard, not censored,” Simon said. “Her accusation about the conduct of a former Chinese leader involving a sexual assault must be treated with the utmost seriousness. In all societies, the behavior she alleges that took place needs to be investigated, not condoned or ignored.”

Why are there concerns about her whereabouts and well-being?

Peng hasn’t been active on social media since her post was removed on Nov. 2, and has not been seen in public or responded to communication attempts from the WTA. In an interview with The New York Times on Sunday, shortly after his statement was released, Simon said the Chinese Tennis Association and other local sources confirmed that Peng was safe. Yet no one from the WTA, including officials and active players, had been able to directly reach Peng.

In an interview with Time, published on Wednesday morning, Simon said the organization had tried every method at its disposal to reach her.

“Voice, digital, tweeting,” he said. “WeChat. WhatsApp. Text. There are plenty of different messaging things we all use and are all able to communicate with. And none of those have produced a result as of this point.”

Later on Wednesday, China Global Television Network, a government-affiliated media organization posted a tweet with a message reportedly from Peng, but it only furthered doubt about Peng’s whereabouts and safety.

In the message, which CGTN said was from Peng in response to the WTA’s previous statement, the sexual assault allegation is called “not true.” The message also says Peng is “resting at home and everything is fine,” and claims the WTA didn’t verify any of its information. It ends with a hope for the future of Chinese tennis.

In addition to the content of the purported email, users on social media pointed out the cursor visible on the word “and” early in the message — something that would be unlikely in an email that has been received.

Did Simon or the WTA respond to the message that was reportedly from Peng?

Simon released another statement soon after on Wednesday and made it clear he didn’t believe the message had come from her.

“I have a hard time believing that Peng Shuai actually wrote the email we received or believes what is being attributed to her,” read the statement. “Peng Shuai displayed incredible courage in describing an allegation of sexual assault against a former top official in the Chinese government. The WTA and the rest of the world need independent and verifiable proof that she is safe.”

How has the tennis community responded?

In addition to Simon and the WTA, several other active and former players have voiced their concerns and support for Peng this week.

Four-time major champion Naomi Osaka posted a note on Twitter on Tuesday, using the #WhereIsPengShuai hashtag. “Censorship is never ok at any cost, and I hope Peng Shuai and her family are safe and ok,” she wrote in part.

Earlier in the week Chris Evert, the 18-time Grand Slam victor and ESPN analyst, called the accusations “very disturbing” and asked for information about Peng’s whereabouts.

Yes, these accusations are very disturbing. I’ve known Peng since she was 14; we should all be concerned; this is serious; where is she? Is she safe? Any information would be appreciated.�� https://t.co/RH0aYCDqQm

Nicolas Mahut, a former doubles No. 1, pointed out that the concern extends beyond the WTA.

The fact that Peng Shuai is missing is not only the WTA’s problem. We are all concerned. @atptour @ITFTennis #whereispengshuai #stopthesilence https://t.co/juunFXnuSK

During a news conference at the ATP Finals, world No. 1 Novak Djokovic called it “shocking” and expressed concern for Peng and her family.

Andrea Gaudenzi, the chairman of the ATP, has released multiple statements this week as well and expressed support for the WTA’s calls for an investigation, in addition to hopes for Peng’s safety.

These are perhaps the two biggest questions right now. In his interview with The New York Times on Sunday, Simon said the organization is willing to do whatever it takes to support its players — no matter what is at stake.

And when it comes to the WTA and China, there is a lot at stake. During its normal, non-pandemic-altered schedule, the WTA holds 11 tournaments in the country annually, including the year-end WTA Finals.

“If at the end of the day, we don’t see the appropriate results from this, we would be prepared to take that step and not operate our business in China if that’s what it came to,” Simon told the Times.

On Thursday, Stephen Kinnock, a member of British parliament and a shadow minister for Asia and the Pacific, called on the Chinese to prove Peng is “alive, well and free.” Kinnock said he had reached out to the foreign secretary about the case.

The Chinese state need to provide evidence that Peng Shuai is alive, well and free.

I have submitted a written question to the Foreign Secretary, asking her what representations she has made to the Chinese government about this disturbing case.
https://t.co/1WoO1LsWJG

It remains to be seen whether the WTA’s financial threat, or the growing pressure from around the world, will force an investigation or produce tangible evidence of Peng’s safety.

The Associated Press contributed to this story.