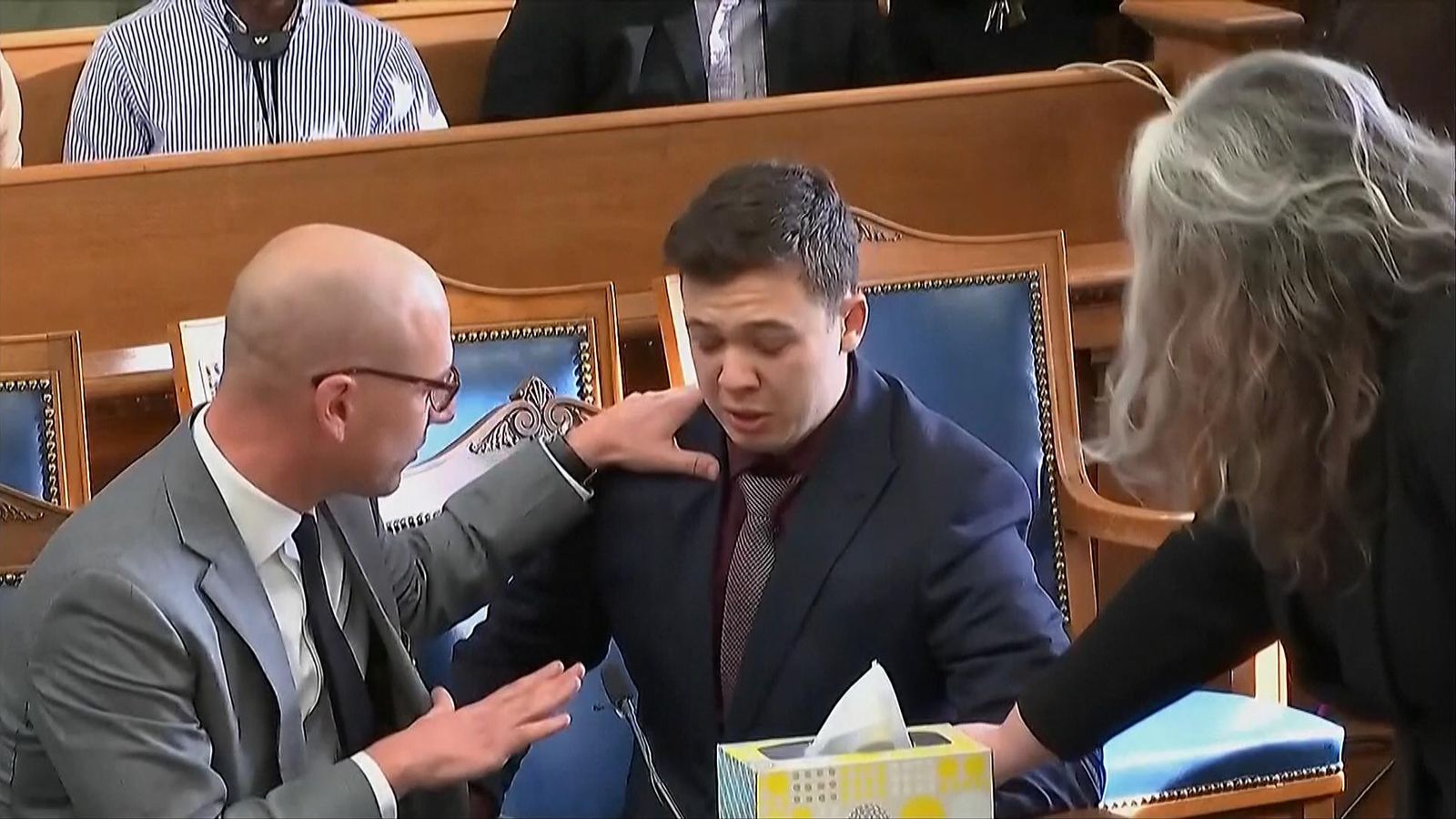 A teenager has been found not guilty of the murders of two men and the attempted murder of a third at a demonstration in Wisconsin.

Kyle Rittenhouse, 18, had pleaded self-defence over the shootings in the city of Kenosha in August 2020.

The deadly incident happened during protests sparked by the shooting of a black man, Jacob Blake, who was injured by a white police officer days earlier.

Rittenhouse was cleared of all charges, including recklessly endangering safety. As the verdicts were read out, he broke down in tears, while jurors remained stoic and emotionless. 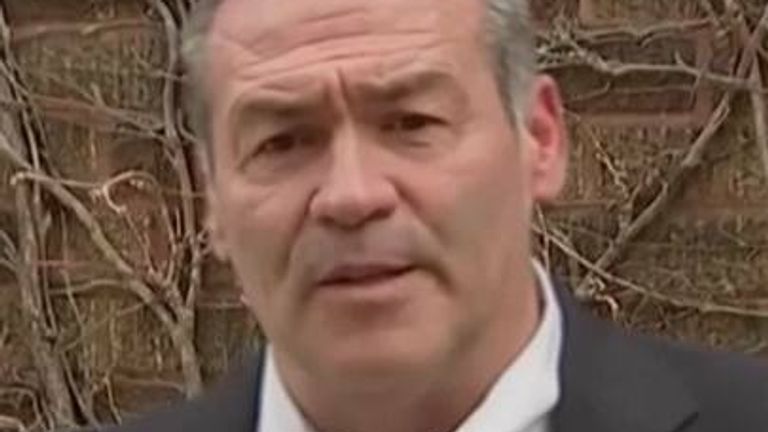 ‘Kyle wants to get on with his life’

Circuit Judge Bruce Schroeder dismissed the jurors and assured them the court would take “every measure” to keep them safe.

A sheriff’s deputy took Rittenhouse out via a back door through the judge’s chambers.

Relatives of the three men who were shot held hands and cried.

Outside the courthouse, there was a heavy police presence, as several dozen protesters carried placards supporting or condemning the teenager.

Rittenhouse, who was 17 at the time of the shootings, had travelled from the neighbouring state of Illinois.

He claimed in court that he had been asked to help protect the community by a local business owner.

The jury of 12 had been selected from a wider group of 18 who had listened to the evidence over two weeks.

In an unusual move, marking the beginning of a trial full of suspense and drama, Rittenhouse himself was asked to select the jurors by pulling six pieces of paper with their names on them from a lottery tumbler – a task usually carried out by a court clerk.

The six jurors he selected were designated as alternative jurors while the remaining 12 became the deliberating jurors.

The jury had been asked to consider two widely conflicting narratives which led to the shooting of the three men. 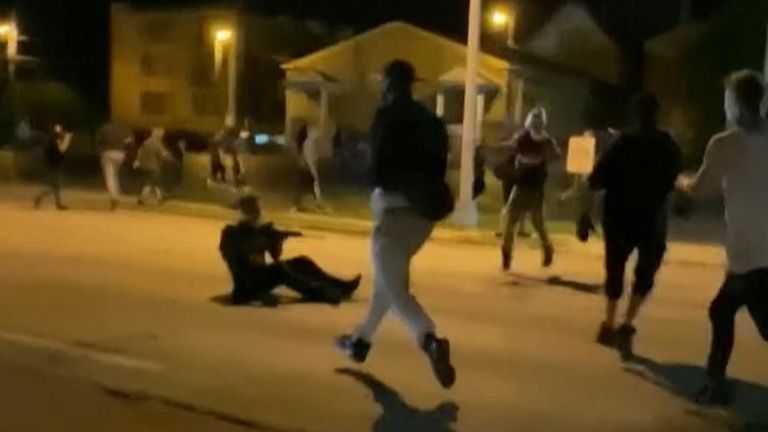 The prosecution had argued that Rittenhouse was a “wannabe soldier” and a vigilante who had travelled to Kenosha bent on stirring trouble at the protest.

Prosecutor Thomas Binger had argued that the teenager had caused a deadly chain of events by bringing a legally owned automatic AR15 rifle to a protest, walking about like “a hero in a western” and that he was “looking for trouble”.

After the verdict, Mr Binger said that the jury had spoken.

During the protest, Rittenhouse first shot Joseph Rosenbaum, 36, who was unarmed.

He then shot Anthony Huber, 26, who had struck the defendant with a skateboard. He was also killed.

The third man to be shot, Gaige Grosskreutz, 28, was carrying a pistol.

He was injured and gave evidence for the prosecution.

The court saw footage from a drone which the prosecution argued showed the defendant pointing his weapon at people.

“This is provocation,” the prosecuting attorney had argued. “This is what starts this incident.” 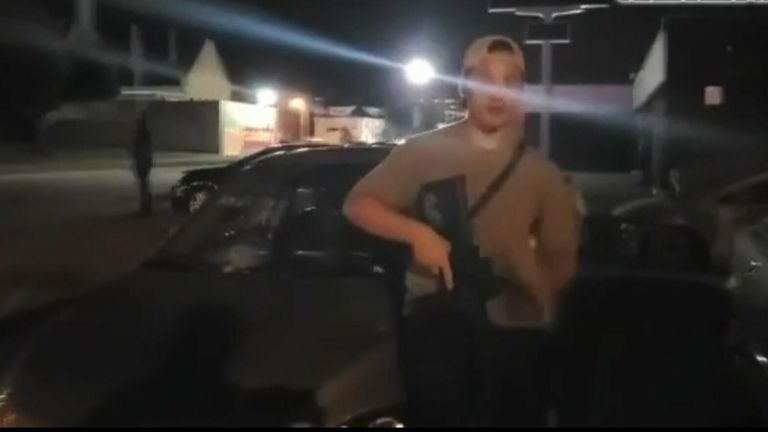 Rittenhouse’s defence attorney, Mark Richards, argued that his client was acting in self-defence after coming under attack at the protest.

Mr Richards said Rittenhouse had travelled to the city to act as a medic and to protect property.

The defence had cast the first of Rittenhouse’s targets as a “crazy person”.

Mr Richards argued that Joseph Rosenbaum ambushed the defendant who had feared that his rifle would be taken from him and used against him.

At times during proceedings, Rittenhouse broke down in tears as he gave his own evidence.

Mr Huber’s parents Karen Bloom and John Huber said after the verdicts that they were “heartbroken and angry”.

“Today’s verdict means there is no accountability for the person who murdered our son.

“It sends the unacceptable message that armed civilians can show up in any town, incite violence, and then use the danger they have created to justify shooting people in the street.

“We hope that decent people will join us in forcefully rejecting that message and demanding more of our laws, our officials, and our justice system.”

Rittenhouse’s mother Wendy had gasped in delight when the verdicts were read, later crying and embracing those around her.

David Hancock, spokesman for the Rittenhouse family, said: “We are all so very happy that Kyle can live his life as a free and innocent man, but in this whole situation there are no winners – there are two people who lost their lives and that’s
not lost on us at all.”

National Association for the Advancement of Colored People president and chief executive Derrick Johnson wrote on Twitter that the verdict “is a reminder of the treacherous role that white supremacy and privilege play within our justice system”.

Also on Twitter, the National Rifle Association wrote: “A well-regulated militia, being necessary to the security of a free state, the right of the people to keep and bear arms, shall not be infringed.”

Black Voters Matter wrote: “Disappointed but not surprised. This is not justice, this is not accountability. However, this is America.”

US President Joe Biden said: “While the verdict in Kenosha will leave many Americans feeling angry and concerned, myself included, we must acknowledge that the jury has spoken.

“I ran on a promise to bring Americans together, because I believe that what unites us is far greater than what divides us.

“I know that we’re not going to heal our country’s wounds overnight, but I remain steadfast in my commitment to do everything in my power to ensure that every American is treated equally, with fairness and dignity, under the law.”

He added: “I urge everyone to express their views peacefully, consistent with the rule of law.

“Violence and destruction of property have no place in our democracy.

“The White House and federal authorities have been in contact with Governor Evers’s office to prepare for any outcome in this case, and I have spoken with the governor this afternoon and offered support and any assistance needed to ensure public safety.”

Wisconsin’s governor Tony Evers said: “No verdict will be able to bring back the lives of Anthony Huber and Joseph Rosenbaum, or heal Gaige Grosskreutz’s injuries, just as no verdict can heal the wounds or trauma experienced by Jacob Blake and his family.

“No ruling today changes our reality in Wisconsin that we have work to do towards equity, accountability and justice that communities across our state are demanding and deserve.”

He asked any protesters to have their voices heard “safely and peacefully”. 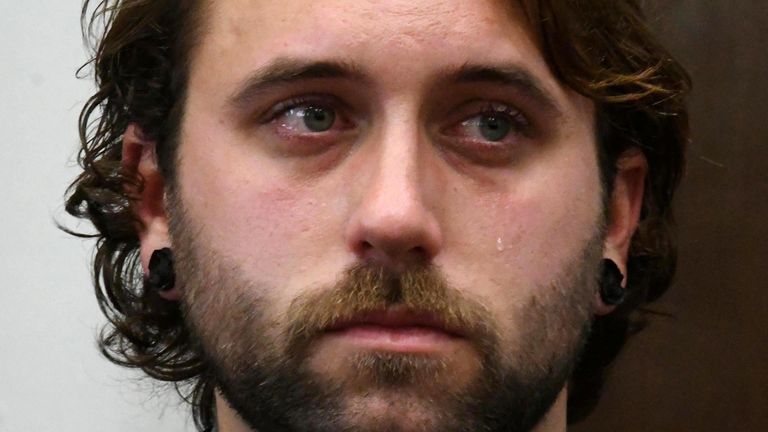 About 500 members of the Wisconsin National Guard have been placed on standby in an undisclosed location 60 miles from the city to move in at the order of the governor.

The units will not be deployed unless the local police in the city requests their assistance. Their role will be limited to protecting locations deemed critical infrastructure and cultural institutions.

Residents of the city are nervous having experienced the significant unrest last summer in the wake of the shooting by police of 29-year-old Jacob Blake.

The shooting – one of a number last year by police against the black community – promoted widespread protests in Kenosha.

In his closing instructions to the jurors, the judge, Bruce Schroeder explained that in order to accept Rittenhouse’s claim of self-defence, they must accept that he believed there was an unlawful threat to him and that the force he used was “reasonable and necessary”.