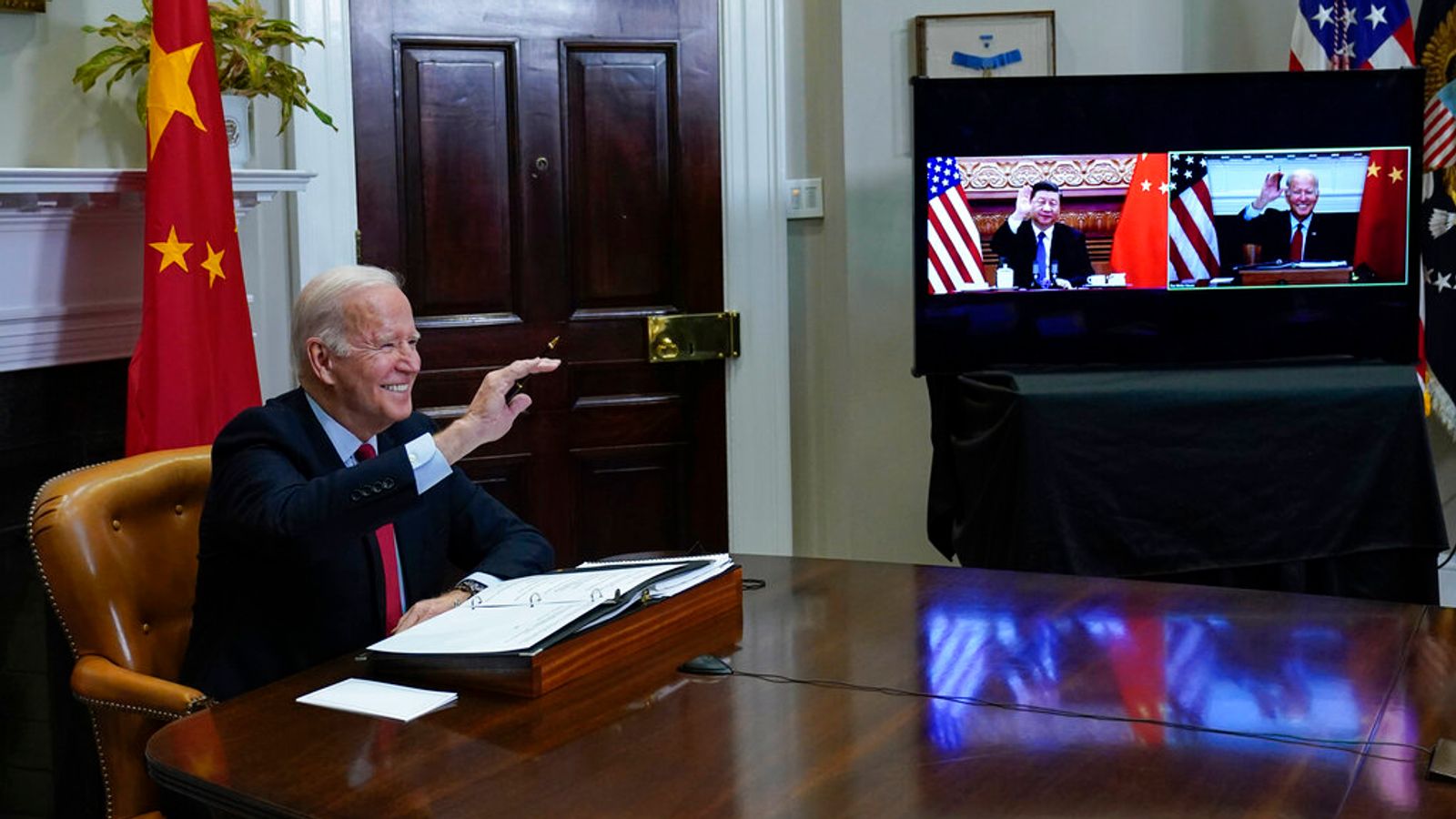 US President Joe Biden has held a virtual meeting with China’s Xi Jinping and began on a positive note – saying their goal is to ensure competition “does not veer into conflict”.

The two leaders met on a video call amid rising tensions between the US and China, which have long had a strained relationship.

Mr Biden has criticised Beijing over human rights abuses against Uyghurs in northwest China as well as the suppressing of democratic protests in Hong Kong and military intimidation towards the self-ruled island of Taiwan, among other things.

In response, Mr Xi‘s deputies have lashed out against the Biden administration for interfering in what they believe are internal Chinese matters.

“It seems to be our responsibility as the leaders of China and the United States to ensure that the competition between our countries does not veer into conflict, whether intended or unintended, rather than simple, straightforward competition,” Mr Biden said as he opened the meeting.

He added: “It seems to me we need to establish some common sense guardrails. To be clear and honest where we disagree, and work together where interests intersect, especially on vital global issues like climate change.”

Mr Biden said the US is “always going to stand up for our interests and values and those of our allies and partners,” before inviting Mr Xi into a discussion where his administration has concerns, “from human rights to economics, to ensuring a free and open Indo-Pacific”.

Mr Xi, who warmly greeted the US leader by referring to him as his “old friend”, said the two sides needed to improve communication.

He claimed a healthy and stable bilateral relationship is necessary for dealing with global challenges like climate change and COVID-19, and added he would like to work with Mr Biden to guide the positive development of US-China relations.

“I stand ready to work with you, Mr President, to build consensus, take active steps and move China-US relations forward in a positive direction,” he said.

“A sound Chinese-US relationship is required for advancing our two countries’ respective development and for safeguarding a peaceful and stable international environment, including finding effective responses to global challenges, such as climate change… and the COVID pandemic.”

Mr Xi pointed out that both China and the US are at critical stages of development, and the “global village” of humanity faces multiple challenges.

The two leaders previously travelled together when both were vice presidents and know each other well – and Mr Biden would have preferred to meet Mr Xi in person.

However the Chinese leader has not left his country since before the start of the COVID-19 pandemic.

The White House suggested the idea of a virtual meeting as the next best thing to allow for the pair to have a candid conversation about a wide range of strains in the relationship – from climate change, to human rights and trade.

Ahead of the meeting, the White House said Mr Biden will abide by the longstanding US “One China” policy, which recognises Beijing but allows informal relations and defence ties with Taipei.

It comes after Chinese military forces held exercises last week near Taiwan in response to a visit by a US congressional delegation to the island.

Mr Xi may be looking to stabilise US-China relations in the near term with Beijing set to host the Winter Olympics in February, as well as the Chinese leader expected to serve a third five-year term as president next year.

White House press secretary Jen Psaki earlier said that the “condensing of power” in China made the leader-to-leader conversations essential.

Meanwhile, Mr Biden has some domestic issues of his own after seeing his polling numbers fall over concerns about the lingering coronavirus pandemic, inflation and supply chain problems, and is looking to find a measure of equilibrium on the most consequential foreign policy matter he is facing.

The White House set low expectations for the meeting with Mr Xi, and said no major announcements or even a joint statement were anticipated.

Joe Biden vows to work with political rivals in his latest State of the Union address
Some of Wall Street’s biggest names are exposed to the Adani Enterprises plunge
Robinhood board approves plan to buy back Sam Bankman-Fried’s $578 million stake
Ranking college football’s best transfer classes: The top 10 for 2023
Apple sales drop 5% in largest quarterly revenue decline since 2016