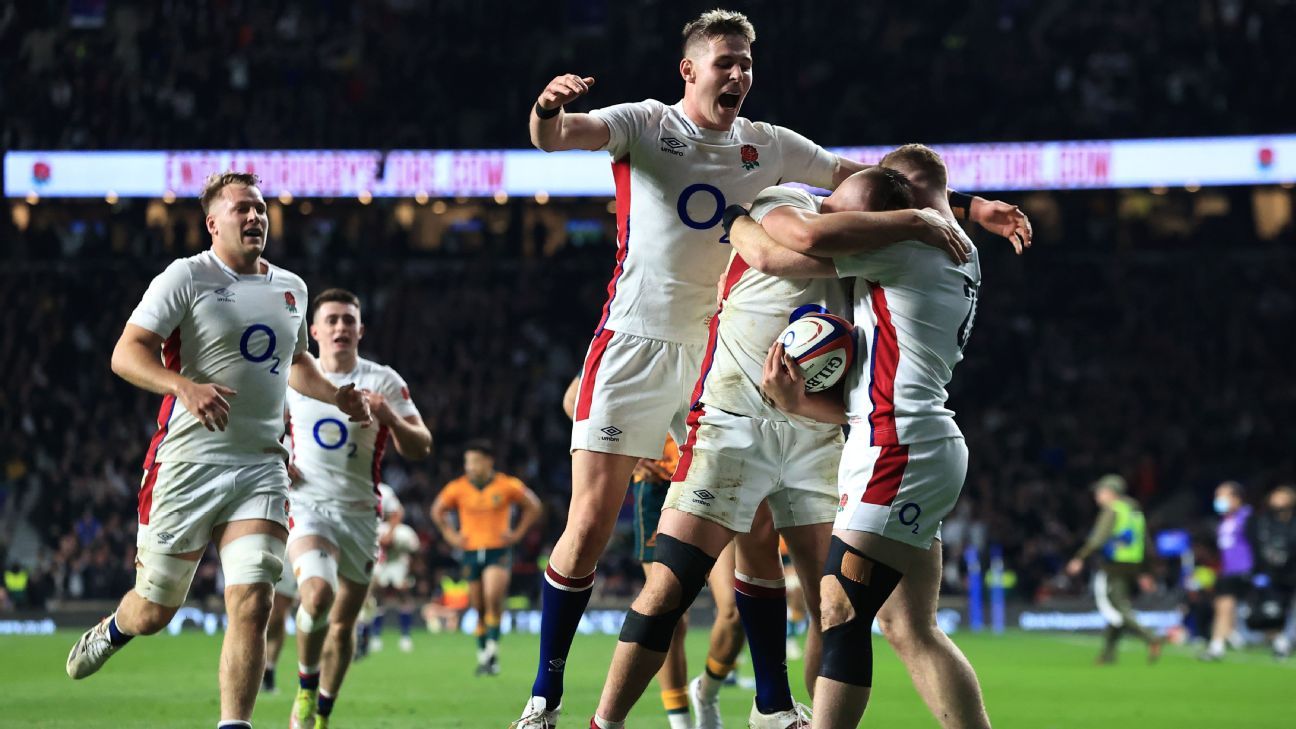 There was barely any danger of the Wallabies’ hoodoo ending at Twickenham on Saturday. If Australia losing to Eddie Jones’ England felt familiar before, the visitors will leave London thinking it is almost grimly inevitable.

As victories go, this was straightforward for England in a slippery match where errors from both sides halted the flow of the game. Jones holds a 8-0 record against his old Wallabies side since he took over the England job. Players and coaches have come and gone on both sides of the divide, but the results stay the same.

On Saturday on a chilly evening, the Wallabies looked they’d left their attacking playbook back in the southern hemisphere, while England had opportunities to make this even more one-sided. Yet, from the hosts’ point of view, this was a game of individually impressive performances amid a new-look team still gelling. They had to dig in and deserved the victory.

“We had to battle today, battle hard,” Jones said. “We thought it’d be more of a free-flowing game, but it turned out to be a heavy-penalty game, set-piece contest.”

The talk of the crowd before the contest centered around Manu Tuilagi’s surprise inclusion on the wing — which was largely a red herring as he attacked through the middle — and Marcus Smith’s selection at fly-high and Owen Farrell’s move to centre. But it was the outstanding Freddie Steward that shone brightest.

England’s two tries from Steward and Jamie Blamire bookended this victory and they were the best moments of the match. The Steward score saw England’s partnership in the middle click as Farrell and Smith combined neatly to put the fullback through. “It was one of the best tries I’ve seen from an England side — we want to do more of that, but it won’t happen all the time. But very promising,” Jones said. For the last effort it came from a Alex Dombrandt break amid the final throes of a match long out of the Wallabies’ grasp who put over Blamire.

Both were fantastic for England. Steward was outstanding throughout; reliable under the high ball, happy to flit between fullback and the wing, and was pretty faultless. Given this was just his fourth Test and is 20 years old, his potential is frightening. Jones was similarly impressed. “He’s got a good head on him mate — wants to improve, communicate well, good awareness of where the ball is,” the coach said of Steward. “He’s courageous in the air.”

Newcastle hooker Blamire ended up playing the complete second 40 after Jamie George went off at half-time and carried well, kept things ticking over in the scrum and looks to be an outstanding addition to England’s front-row ranks.

Taking into account the new personnel — seven playing their first Test match against a Tier 1 nation — they will take time to gel. First the positives: England have played two internationals this November and are yet to concede a try. These young guys are playing in front of packed stands for the first time as internationals, navigating that whole overflow of noise and distractions while none of the 23 looked out of place on the Test stage.

Bevan Rodd made his debut after both Joe Marler and Ellis Genge were ruled out through COVID-19 and coped admirably with all the turbulence to put in an assured performance. “Making his debut against a bloke with 113 caps — playing 65 minutes — it was a reparable effort from the young man,” Jones said. “He adapted well.”.

And then there was Smith. He and Henry Slade swapped duties defending deep, with Manu Tuilagi and Steward more often than not finding themselves in the defensive line. Smith had flashes of brilliance and there were promising signs of his partnership blossoming nicely with Owen Farrell. But his game embodies that of the side itself: talent abound, but with aspects waiting to click.

The consistent force through this November has been the ever-imposing Courtney Lawes. If Farrell — who picked up a foot injury in the second half — misses the Springboks next Saturday, then Lawes will lead England out. He is playing at the top of his game, so impressive with his neat interplay in the close quarters, but also in causing all sorts of havoc in and around the breakdown. “I think he’s developing as a player, he’s committed to being the best player he can be over the next two years,” Jones said of Lawes. “He’s working on his game to keep improving. Good performance today — the senior guys had to dig deep.

But, for all their success, there is work to be done. England will know they will need to take things up a notch for South Africa next Saturday.

England were counter-rucked off the ball too often, and this needs to be addressed ahead of the Springboks, while they failed to finish off promising moves. There was a moment in the first half where Henry Slade had Jonny May on the outside but failed to fix his man and his pass found May in a cul-de-sac when he could have had a run in. Jamie George crashed over the line but found the ball knocked from his grasp by Nic White while there were linebreaks from England which either ended in being turned over, or a lack of support runners. This is all part of the evolution, and with a new-look coaching team and on-field group of players, this cohesion will take time to gel. But Jones will take this 32-15 victory, knowing they’ll have to improve in being clinical in the red zone.

This performance from the Wallabies was not in the same vogue as what we’ve seen them grow during the recent Rugby Championship under Dave Rennie; it was more akin to the disjointed outfit who have glumly visited this part of the world back at the start of the last decade. “We never really got going,” Rennie said afterwards. “Dumb penalties put us under pressure. That sums it up as succinctly as possible from an Australia perspective, and the pernickety officiating from Jaco Peyper meant this game never really got out of second gear.

This November was always going to be one of evolution for England. They’ve handed out debutants and the spine of the team for the 2023 World Cup is starting to break through. But with the Springboks up next weekend, England will have to find pinpoint accuracy if they are to finish this autumn with a clean sweep.