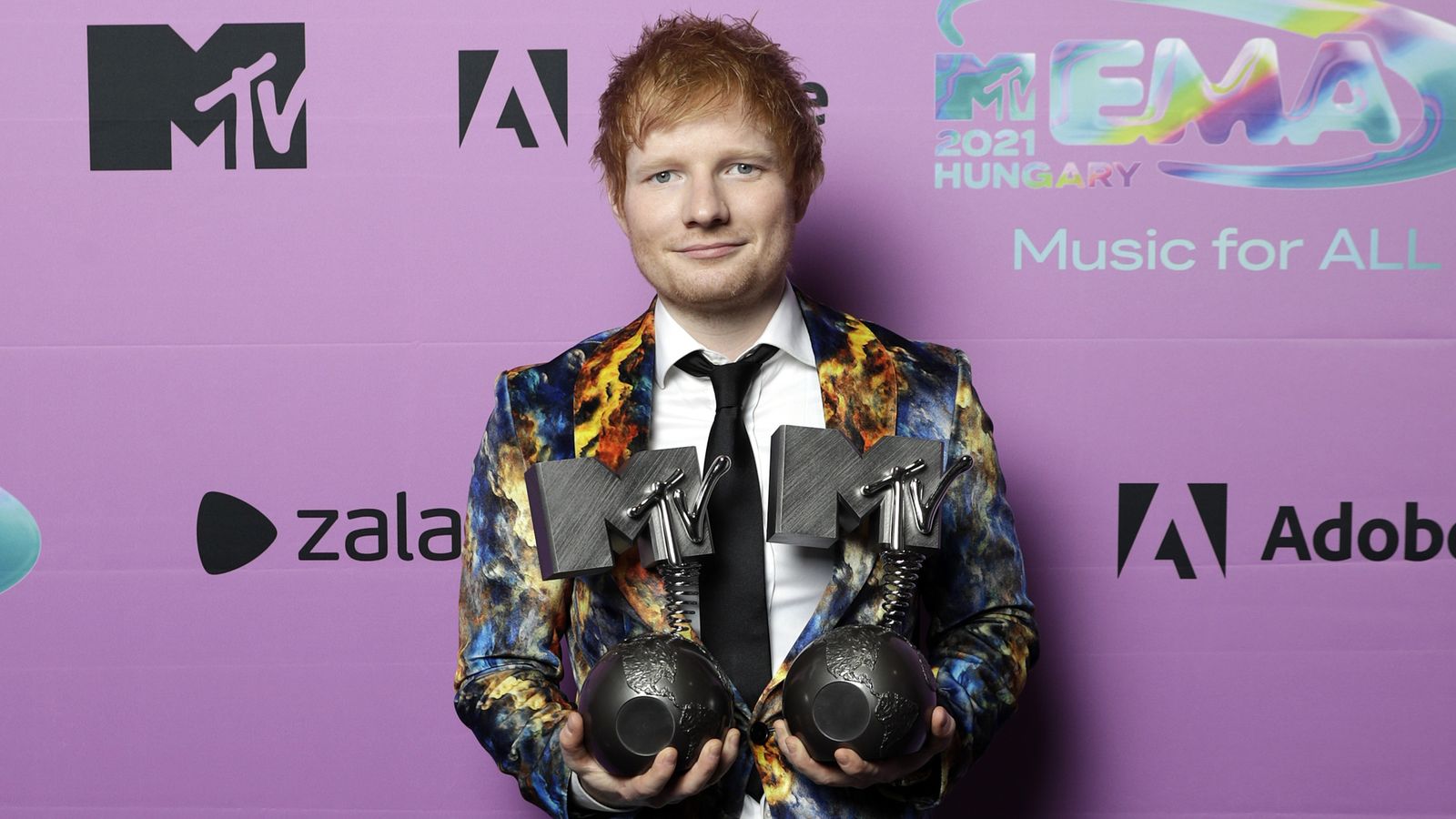 The British singer-songwriter opened a car boot to receive the Best Artist award before also securing the Best Song accolade for Bad Habits.

Wearing a bold print suit for the occasion, the 30-year-old opened the awards ceremony as it returned to a live in-person show after it was held virtually last year due to the COVID-19 pandemic.

Fellow British talent Yungblud, who closed the ceremony with a fire-fuelled performance, declared his Best Alternative award as a “tribute to individualism”.

He recalled being “terrified” as a youngster to be who he wanted to be, adding: “If you are out there and you feel you cannot be who you are – you can be.

US rapper Saweetie hosted the star-studded event in the Hungarian capital and also led the support for the LGBT+ community.

She told the crowd it is “always important we respect each other” as she relaxed on a chaise longue wearing a bikini in a mock spa location – a nod to Budapest’s spa culture.

The 28-year-old star, who wore multiple different outfits throughout the show, added: “That’s why it’s so important we stand up for the LGBTQ+ community.”

MTV recently stood by the location of the awards show despite Budapest’s recent passage of legislation widely condemned as anti-LGBT+.

Years And Years singer Olly Alexander, presenting Best Video, said of the nominees: “They all support same sex adoption as family is family.”

Meanwhile, US rapper and singer Lil Nas X accepted the award for Montero (Call Me By Your Name) via a pre-recorded video, claiming he was having to “work his shift at Taco Bell”.

British singer and actress Rita Ora presented the Best Latin award at the event, handing it to Colombian singer Maluma.

German-born Kim Petras became the first transgender star to perform at the awards show while Maneskin, who won the best rock category ahead of Coldplay and Foo Fighters, were among the other acts to play.

Saweetie also went from host to award winner at one point as she won Best New Category.

She thanked God and her family before praising her fans for supporting her “since I was rapping in my car”, adding: “This is just the beginning.”

Stars chatting to press on the red carpet expressed the importance of the ceremony taking place in Budapest.

“I’m from an extremely conservative, right-wing city and family and religious community so until I was 20 I had the same kind of thoughts of like ‘Oh, that’s bad, this is good’.

“And now I’m sitting here going it’s absurd we even have to make these statements that everyone is equal and showing love and equality.

“These are things that should have been the absolute bedrock of constitutions and humanity for the last 100 years but, you know, it takes a minute for humans to catch up and I think we’ve finally caught up.”

Northern Irish singer JC Stewart said it was a “dream come true” to attend the event and be nominated for an award, having busked outside an EMAs ceremony a decade ago.

He said: “It’s pretty crazy, it’s a dream come true for me – I busked outside the EMAs 10 years ago in Belfast so I never thought I’d be here today. It’s all a bit much in a lovely way.”

Why a British star’s Oscar nomination has sparked controversy
Future industrial action ‘will be even bigger’ if ministers do not act, union boss warns
The 30 key moments in Gary Bettman’s 30 years in the NHL
It is as though ‘she vanished into thin air’, Nicola Bulley’s partner says
Alec Baldwin to make first court appearance over fatal Rust shooting this month