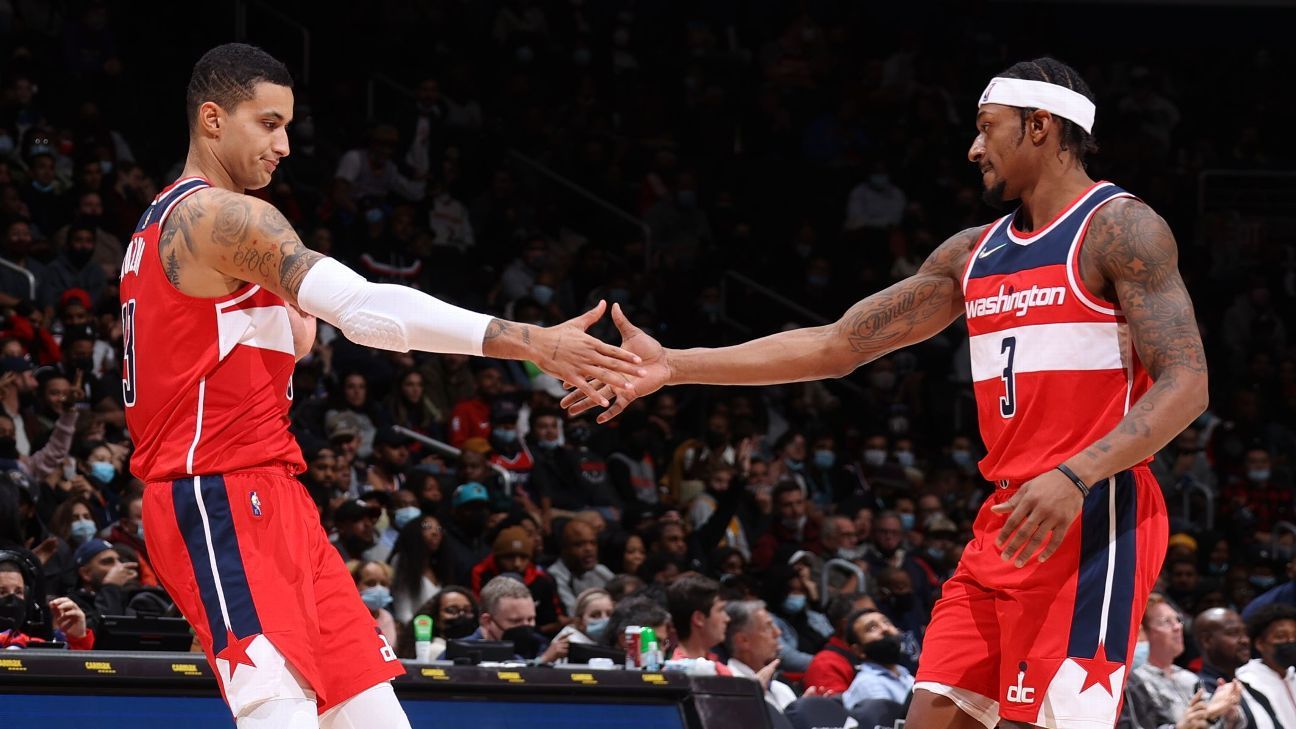 The NBA season is — almost — a month old. What standouts are here to stay?

The Eastern Conference standings is full of early-season surprises, including impressive starts from the Chicago Bulls, Washington Wizards and Cleveland Cavaliers. Meanwhile, the defending champion Milwaukee Bucks are dealing with injuries as they work their way out of the conference’s bottom 10.

The Western Conference isn’t as topsy-turvy as its East counterpart, but the Los Angeles Lakers‘ woes are starting to raise concerns about one of the preseason title favorites. Will the star-studded Lakers break out of their early hole before Giannis Antetokounmpo and the Bucks?

Our NBA experts are examining some early season storylines, including which contender — the Brooklyn Nets or Philadelphia 76ers — is better equipped to handle its star absence, and which players’ hot starts are flying under the radar.

The discontinued sneaker that has NBA players scrambling

1. Which surprise team’s early success is the most sustainable?

Tim Bontemps: The Wizards. Turning Russell Westbrook into Spencer Dinwiddie alone is arguably an upgrade at this point in their respective careers. Throw in getting Kyle Kuzma, Kentavious Caldwell-Pope and Montrezl Harrell, and it’s a clear win for Washington. Having a rotation full of solid NBA players is a recipe for regular season success, and new coach Wes Unseld Jr. has done an excellent job. This looks like a clear playoff team, even in a much more competitive Eastern Conference.

Andrew Lopez: The Wizards have gotten major contributions from all four of their big offseason acquisitions. Dinwiddie is working his way back into his 2019-20 form, but the three players picked up in the Westbrook trade have all stepped up: Kuzma (14.8 points and 9.1 rebounds per game) and Harrell (18.3 points and 9.3 rebounds) look as comfortable as ever, while Caldwell-Pope is still hitting his 3s at close to a 40% clip.

Bobby Marks: The Bulls. I am buying stock in what Chicago has been able to do. Not only does this team have the offensive firepower in All-Stars Zach LaVine and DeMar DeRozan, but they are also starting to find an identity on the defensive end. The Bulls rank No. 6 in defensive efficiency, and the signing of Alex Caruso is proving to be one of the top under-the-radar signings of the offseason.

Kevin Pelton: The Bulls. I was a noted skeptic of the Bulls’ high expectations entering the season, but I’ve quickly come around. As I explored in last weekend’s NBA mailbag, there’s little to nothing fluky about Chicago’s surprising success at the defensive end. Meanwhile, DeRozan has fit perfectly at the offensive end. Even if his shooting drops off a bit, positive regression from Nikola Vucevic should keep the Bulls’ offense running smoothly.

Ohm Youngmisuk: The Bulls, who have a nice combination of scorers, playmakers, veterans and young and hungry guys who are relentless. They might not maintain the best record in the East, but they are going to be a top-five team. DeRozan has been an incredible fit and has started the season off on fire. Lonzo Ball should only get more comfortable with his new teammates and LaVine and Vucevic should continue to benefit. They play defense, play hard and play together. Chicago doesn’t look like it’s going away.

2. Which struggling contender will escape its rut first: The Lakers or the Bucks?

Lopez: The Bucks. This question feels like which team will get healthier first, and Milwaukee may have the nod. Once Khris Middleton gets out of health and safety protocols, he’ll go back to giving the Bucks’ offense a boost. Antetokounmpo has been giving it his all so far. The Lakers are just missing more bodies but hopefully can get back going once LeBron James gets back in the lineup.

Pelton: The Bucks. Jrue Holiday is already back, and Middleton shouldn’t be far away, getting Milwaukee closer to its full complement of stars after Holiday missed six games and Middleton five and counting. Those absences underscored how quickly the Bucks’ depth drops off, but few teams are capable of playing without four starters (Brook Lopez and Donte DiVincenzo, who have played one game combined, being the others).

Youngmisuk: The Bucks have the massive advantage of having been together for the most part and knowing how to win a title together. Yes, LeBron and Anthony Davis won a title just over a year ago but they have so many new pieces to incorporate, including a big piece in Westbrook. Antetokounmpo has his championship core around him. Sure, the Bucks could be suffering from a championship hangover a bit. Giannis just needs a healthy and rested Holiday and Middleton together again.

Marks: The Bucks. The Lakers were always going to be a work in progress because of 12 new players on the roster. The Bucks have an MVP in Antetokounmpo plus the continuity factor to keep them in the Eastern Conference race all season. While both teams have been snake bit with injuries, the Bucks finally have Holiday back in the starting lineup and recorded back-to-back wins on the road against Philadelphia and New York.

Bontemps: The Bucks. They blew out Brooklyn on opening night and haven’t been healthy since — they’ll be fine. The Lakers, meanwhile, haven’t looked good against a soft schedule and now James is dealing with an abdomen injury. There are a lot of early warning signs in Lakerland.

3. Which team currently outside the top 10 in its conference is most likely to qualify for the postseason?

Marks: The Hawks, who are on a five-game losing streak and are closer to Detroit in the bottom of the Eastern Conference standings than Washington at the top spot. Despite the poor start to the season, the Hawks have played a road-heavy early schedule (eight of their twelve games have been away from Atlanta) and return the same core players that were two wins away from the NBA Finals.

Lopez: The Hawks. Atlanta has stumbled to a 4-8 start, but the pieces are in place for them to make a push. Trae Young told reporters last week that the team has struggled getting motivated for regular season games after last year’s run to the Eastern Conference finals. Coach Nate McMillan found the right buttons to push once he took over in March — he’ll find the right ones to press again to get them going this time around.

Bontemps: The Hawks. It’s been an ugly start for Atlanta, which is clearly struggling to establish a clear hierarchy. But there’s also way too much talent here for this team to stay down.

Pelton: Flip a coin between the Celtics and the Hawks. Both were expected to be in the East’s top six entering the season, and while the fast starters elsewhere in the conference have jeopardized that notion, Atlanta and Boston both have plenty of time to turn things around.

Youngmisuk: The Celtics. It’s been a rocky start for Boston. Obviously the Celtics don’t have Jaylen Brown right now due to injury, but when Boston has him and Jayson Tatum, that should be more than enough for the Celtics to eventually find their way into the East’s top eight.

4. Which East contender is more likely to be fine long term without its absent star, the Nets (Kyrie Irving) or the 76ers (Ben Simmons)?

Pelton: If long term means the rest of the regular season, I’d say Philadelphia, which has showcased the kind of depth needed to survive Simmons’ absence while also negotiating those for multiple other starters. Come playoff time, however, I think the Nets’ pair of stars still makes them much more dangerous than the Embiid-centric 76ers.

Lopez: The Nets. I think the simple answer here is going with the team that has two bonafide superstars over the team with one. Brooklyn proved last year it could still do damage with two of its big three, while Philadelphia just has Joel Embiid to lean on. Once Harden gets more comfortable with how fouls are being called and his 2-point percentage creeps back up to what we’re used to seeing from him, Brooklyn will find even more success.

Youngmisuk: The Nets are going to be fine, even if Irving doesn’t get a vaccination shot to comply with New York City’s vaccination mandate. The Nets are starting to get comfortable with all their new pieces, and that is with James Harden still working his way back into shape and getting accustomed to the new officiating which has largely taken away his usual trips to the free-throw line. Once Harden gets comfortable and confident again, the Nets will really take off with Kevin Durant already playing at an MVP level.

Marks: The Nets, but only if Harden plays like an All-Star. This Brooklyn team is average if Harden plays like he did in the first five games of the season when he recorded just 16.3 PPG and shot below 36% from the field. He was a team-worst minus-8.4, led the team in turnovers (4.6) and attempted only three free throws per game. However, there have been times in the first month when Harden resembles the player from last year. In a win at Toronto, Harden scored 28 points, grabbed 10 rebounds, handed out 8 assists and turned the ball over only twice.

Bontemps: The Nets. Brooklyn traded for Harden precisely so that if the team lost one star, they’d still have two others. The 76ers, meanwhile, are down Simmons, and it’s entirely unclear when that situation will be resolved and what the team will look like after. Until that changes, or the Nets lose Harden or Durant, the answer has to be Brooklyn.

5. Which player’s start are we not paying enough attention to right now?

Bontemps: It’s an odd answer, given what happened with the Heat Monday night, but Nikola Jokic has been unbelievable so far. The record for season-long PER is 32.1, set by Wilt Chamberlain a half-century ago. Jokic, so far, has a PER of 35 and is shooting 60% overall and 40% from 3. If he keeps up anywhere near that pace, he’ll give himself a shot at another MVP.

Lopez: Injuries and inconsistencies hampered Cole Anthony‘s rookie season with Orlando, but he’s been a bright spot for the Magic so far this year. Anthony’s averaging 19-7-5 while shooting 39.1% from deep. As Orlando once again tries to build things up from the bottom, Anthony is proving he could be a solid foundational piece.

Pelton: Grayson Allen, who is hitting 41.9% of his 3s while having ramped up his volume from 5.5 per game last season with the Memphis Grizzlies to 8.8 so far this season. As a result, Allen is averaging a career-high 15.4 PPG and may make it difficult for DiVincenzo to reclaim his starting job when he returns to the lineup.

Youngmisuk: Paul George is carrying the load for the Clippers with Kawhi Leonard out. Through his first 10 games, George has averaged 26.7 points, 8.2 rebounds, 5.4 assists and 2.5 steals. The Clippers got off to a slow start but won five straight entering Thursday. Despite being the focal point of opposing defenses, George has scored 30 or more four times already and has been playmaking for his teammates.

Marks: Jordan Poole. The former first-round pick went from shooting 33.3% his rookie season to a stint in the G-League bubble last year. This season, Poole is second in the team in scoring (17.8 points per game) and is a serious candidate for Most Improved Player.